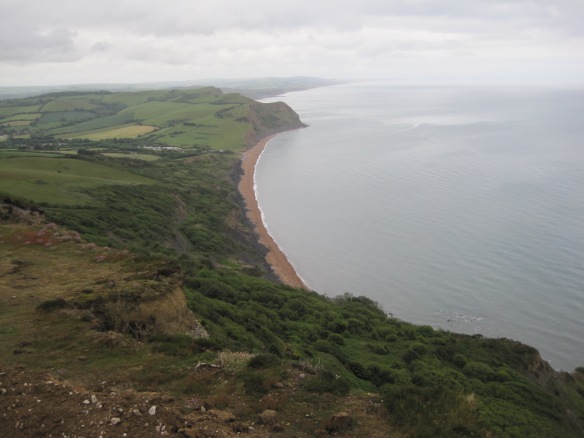 View Eastwards from Golden Cap, Portland in the distance

We have worked with a few art projects over the years, involving objects, processes and site specific projects. One I remember fondly was ’26 and 7 Bones’ in 2012  A contemporary arts project about hands and feet, people and place –  a mapping of connections across place and time – an action, a journey, a collection – and was commissioned as part of the Jurassic Coast Earth Festival 2012, with artists Sue Plamer and Sally Watkins  https://26and7bones.wordpress.com/

We had excavated quite a few sites along the West Dorset coast so Sally and Sue asked if they could work with us, to join the coastguard, blacksmith, herbalist and ornithologist already recruited. Part of the project involved walking up Golden Cap,  talking along the way about what we do as archaeologists and how we feel when working on a site. We had excavated the Bronze Age Barrows and Napoleonic signal station right on the top of the hill over a couple of seasons, with an amazing view as we worked. It was hard to remember that the Bronze Age people would not have had the same view, as the coastline would have been about a mile further out to sea.

As part of the project we were asked to choose a favourite word or place associated with what we did along the coast of Dorset. I chose the word prehistoric, as West Dorset, to me, feels prehistoric, with its hill forts, barrows and stone age objects eroding from the cliffs. It was then turned into music, by punching holes into card in the shape of the word and then fed through a musical box mechanism, a magic moment!

1 thought on “Sounds of the past”