In the last blog, I invited you into the middle of Kingston Lacy north park, asked you to set your time machine to 1371…and to descend almost 1m down onto the floor of the medieval hall.

The Location  of medieval Kingston Lacy manor house, in black, from earthwork and geophysical survey. The present Kingston Lacy House is bottom centre

New Year approaches and the time for medieval gift giving is almost upon us. Very soon it will be 1372 and we still haven’t reached John of Gaunt, his father Edward III and the array of knights and nobility who are assembled beneath our feet. We cannot get there…

Though…we arrived at that level in 1997, via archaeology, our present most effective form of time travel.

This archaeology time machine was not a gismo with circuits and wires but a small band of brothers and sisters wielding spades and trowels.

Cutting the turf in Kingston Lacy Park in 1997

Guided by earthworks and geophysical survey.. we chose our spot and cut a window in the grass. Dark topsoil, yielded to scattered small fragments of stone and lime mortar.. then larger pieces. At 0.2m down, a chunk of immovable brown stone and mortar rose like a tooth from the trench. The rubble peeled off to gradually reveal a ruined wall. Someone, centuries ago, hacked a hole in it and carted away some of the stone for another building but the foundations survived. Increasingly, as we dug deeper, we found white plaster, frost-fractured from the wall in the years of its ruined exposure to the elements 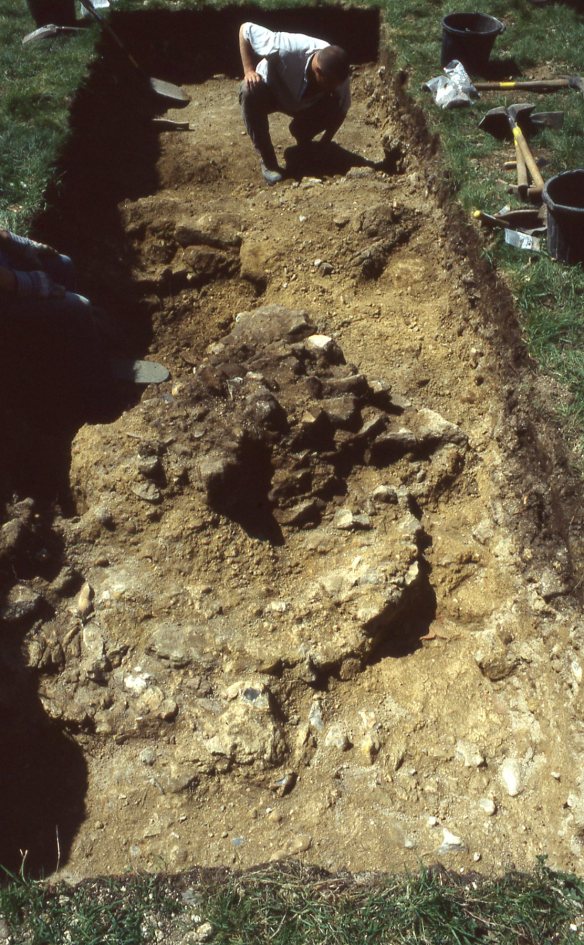 Then, at 0.7m down.. a sudden change, the ragged gritty orange brown rubble stopped. At this level, there was a rich dark loam. Discoveries flicked out of the dirt as we touched them with the tips of our trowels. A small black brown sherd of cooking pot; part of a green glazed jug.. fine enough for the table; oyster shells and many meat bones…roe, fallow and red deer, hares and rabbits, song birds and poultry. At 0.8m, we arrive at what remains of the floor…the yellow and brown shiny surfaces of glazed ceramic tiles.

We touch the remain of their food… the surface they walked on. Nobody has been here since the medieval period. The great hall, the many chambers and St Stephen’s chapel lie all around us.

‘Wyle Nw Yer was so yep that hit was newe commen, that day doubble on the dece was the douth served..’

Another thing ..if we could reach 1372, language would be a problem…

In fitting fashion with splendid revels they rode to the court to dance carols. For there the Christmas feasting was continuous for fully fifteen days.

‘While New Year was so new that it was only just arrived the company was served with double portions. The singing of mass in the chapel having come to an end, loud cries were uttered there by clerics and others. Christmas was celebrated anew, called out by name again and again. And then nobles ran forward to give presents, cried aloud ‘New Year’s gifts’, offered them by hand’.

When they washed their hands, politely they went to their seats, the man of the highest rank always more highly placed as seemed best; On the high dais were Edward III with his sons: John of Gaunt and the Earl of Cambridge with their Spanish wives Queen Constance of Castile and Princess Isabelle. The room adorned with tapestries and the table decorated all around with fine silks and a rich canopy over the high table.

Many true men sat at the side tables and there was music of horns and noble pipes; wild and vigorous trillings wakened echos so that many noble hearts soared high with their strains; dainties were brought in with the music made up of most excellent foods an abundance of fresh meats and on so many dishes that it was difficult to find room in front of the people to set on the cloth  the silver that held the various stews. Each man as he desired helped himself without restraint. 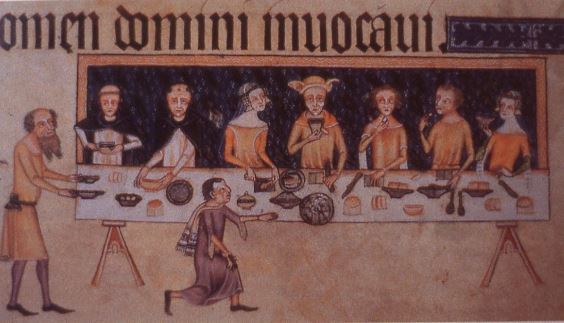 A contemporary painting of a medieval feast from the Luttrell Psalter.

It was time for a story and the late 14th century was a period when the romantic tales of King Arthur and his knights of the round table were very much in vogue.

Here was the King of England with his princes and an assembly of knights from across Britain, France and Spain. Was not this assembly the equivalent to Arthur’s chivalrous court.

A bard steps forward dressed all in green and starts to unravel the tale of ‘Sir Gawain and the Green Knight’. A story which begins and ends during the New Year’s festivities.

He describes the wonders of Arthur’s court… his famous knights all assembled… the 1372 listeners imagine the scene…surely with good wine, Kingston, on a night such as this, can be imagined as Camelot….They are arrayed in their finery, the men noble, brave and handsome, the women gentle and beautiful.

What if their feast was interrupted….Suddenly, before the music has come to an end…there is a sound… a commotion ….. and in strides a fearsome knight dressed all in green. Huge and awesome, he challenges the shocked assembly.

‘Renowned knights of the Round Table, a blow for a blow and a strike for a strike’

He raises the two handed battle axe which he has carried into the hall.

‘On this day, I will submit to take a blow from this axe from any chivalrous knight …..on the condition that I will return the blow in a year and a day’

The room falls silent and nobody moves. The Green Knight begins to taunt them.

‘Is this the famous Camelot?’

King Arthur steps forward but a young and noble knight, Sir Gawain, who is seated beside Queen Guinevere, is shocked into action. His king cannot take up the challenge.

‘I will accept the challenge’ he says.

Sir Gawain takes the axe and severs the head from the Green Knight. It falls to the floor and rolls to the corner of the room.

A pause…. and then, to the shock of the assembly…the Green Knight rises from his knees, strides across the room, picks up his head and says. ‘Seek me at the Green Chapel in a year and a day and receive the return blow from my axe’ and with that he mounts his horse and rides out into the countryside.

One can imagine the hush in Kingston Hall as the bard tells his New Year story. Sir Gawain has a year to live.. as a chivalrous knight he must keep his promise…and the seasons come and go moving towards the next New Year and the journey Sir Gawain must take…riding out towards to his nemesis….

The late 14th century manuscript of Sir Gawain and the Green Knight was only rediscovered among some documents in the 19th century. The language is beautiful and from  its description of the medieval courtly life we can understand a little better what it would have been like to be at Kingston Lacy on New Year’s Day.

Of course, the tale continues… travel in the depths of winter, arrival at a castle …where the Lord offers him hospitality …and his Lady offers herself …while her husband is out New Year’s hunting. Will Sir Gawain remain noble and true? Will he find the Green Knight and what will be his fate?

Well worth a read.