So the 5 year North Range research agenda is complete.

Picture copyright Mike Calnan taken by mini-copter on Thursday. The North Range to the left with the green and blue gazebos in Room 27. You can just see our exterior trenches beyond the walls on the slope top left.

We had started backfilling on the previous day so it seemed unlikely that we would leave late for home on Friday.

Always the optimist. I had arrived at 7am to video the site amongst birdsong.

Carol crossed the corridor, climbed the bank and picked blackberries.

Fay squinted at the rising sun in the valley as I moved the pencil along the staff. Taking levels on the boundary wall.  ‘There’s a breathless hush in the close tonight’. The lull before the storm.
‘Ten to play and a match to win’

Nothing like a bit of imperialist poetry to steel one against the day but who would come to help us? So much recording to do…so many trenches to fill.

Then John kindly arrived despite his birthday, Nick and Nick and Alexander and Harry to join the rest of us stalwarts and we began the long day…

We loaded the last tools as the sun began to set and Amy remained with us until the end. Fabulous! Carol said that the last day on a dig was like childbirth… painful but worth going though again. We were so grateful to everyone for putting the site back together after all our exploration.

Plan from an old guide book to show the numbers of the rooms in the north range 27-30. Our boundary wall and drain trenches were above 30.

What can be said.

On the north side, the boundary bank ran clear across the trench and was easily traced following the contour of the valley above the North Range. A heap of Roman debris lay over it and below the rubble a level stony area suggests a trackway though we did not fully excavate this. 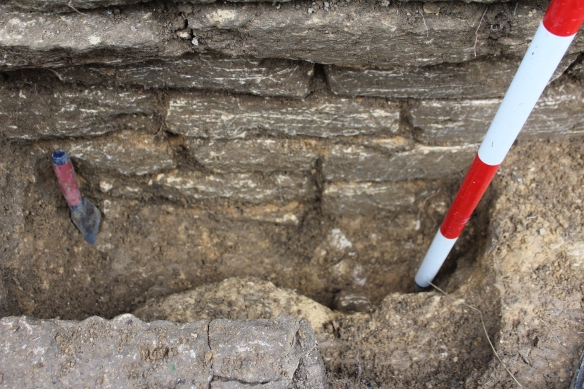 Detail of the Roman wall on the outside face of Room 30. This shows the time when the North Range had a new suite of rooms added to the east. The foundation trench for the old build is stony and has the ranging pole on it. That to the left more soily marked by the trowel. The courses above abutt except for one which cuts into the old build and ties the walls together.

Just below is Rob’s trench against the exterior wall of the kitchen. The beautifully placed 0.33m wide flagstones 0.3m from the wall face. We thought the stones covered a drain. We lifted one and the surface crumbled into hundreds of fragments. Below was only 0.1m of sand and charcoal above the natural clay.

The current story is that the stones were the firm foundation for a timber drain that was built along its surface. The wood had long rotted away but there are stories of iron linking rings being found here.  We still need to track down the source.

No doubt now about the later addition of the suite of rooms 30-32 onto the east end of the North Range. Both in Fay’s trench, within Room 30, and this trench, the abutting joints and change in foundation trench fills were clear.

Our two small trenches in the North Range Corridor showed that there was no mosaic left east of Room 26 but that the narrower and earlier corridor wall could be traced past Room 27. It was not found opposite Room 30 but the ground here has been badly disturbed. Sir Ian Richmond’s 1964 breeze block wall ran deep this far east.

The two trenches in the north range. The one in the foreground had the stones of the narrower and earlier corridor in it.

Peter’s trench in Room 27 had now been backfilled and made  level with replaced turf….. but what had been the point of the deep dressed stone wall against the corridor. Was it an early pre-corridor wall. I am placing a lot of faith in comparative C14 dates from foundation trench fills. The fragments of charcoal have been helpfully plentiful in these but not an ideal dating tool …too crude really for Roman deposits.

We stopped for lunch and the discussions …over leaving cake …turned to mattocks. We admired the prize tool of the dig … the new yellow fibre-handled mattock which Nancy purchased specially. Mattocks are wonderful things… if deftly hefted. We told mattock stories……

We then faced Room 28. I moved forward with parallel tapes and ranging poles, drawing metre by metre and as each space was vacated, the terram, topsoil and turf followed.

The topsoil and terram being placed.

The mosaic survived best in the north… though its gradual deterioration south documented its loss.. Down through the mortar bedding and limestone rubble hardcore. Even the hardcore disappeared in the room’s central zone… becoming a dark soil containing the two hearths and a foundation of rubble between areas of burning. These ragged remains are an exciting discovery. We need to search for comparisons and obtain radiocarbon dates from their organic deposits. I hope for a 5th-6th century date to reveal a time when the villa was still standing.. but had declined from a grand mansion house to a manufacturer’s workshop.

The last trench was Peter and Alexander’s, behind Rooms 25 and 26. Peter had been digging there until the afternoon to understand it better. The trench showed that 25 had been added on but it had once had a different broader plan. This earlier phase had  been part demolished before being rebuilt. The foundation trench along 25’s  north side was clear but to the east the natural bedrock had be dug away deeply and steeply. I jumped down onto a loose mortar surface and slid the trowel under the lowest course of the earliest phase of 25. This cutting continued north-east through the trench section into the slope of the hill. Perhaps a drain or earlier stoke hole… but time was up.

The deep trench cutting natural and the wider foundation under Room 25. Room 26 is on the left. The cutting continues under the section line to the right.

Fay shouted out the levels from the slope and I joined the backfilling.

but the story is not over until the samples are analysed, we have made cross-comparisons and the reports are written. What of our painted glass.. the pottery, the charcoal and other finds?… we will see what they tell us.