We had to cope without Ray, our front of house manager. Although irreplaceable, we did our best by rapidly annotating our illustrations with marker pen. Still very hot but a bit of a breeze so carefully placed Purbeck limestone rocks to hold the interpretation in place.

The annotated maps on the information table.

It was time to leave the ‘Constable’s House’ West Bailey and climb the stone steps through the gateway into the King’s domain in the Inner Ward. Treswell’s plan of 1586 shows a garden above the well in the north-east corner of this top and most prestigious area of the Castle. The feet of many thousands of visitors have revealed a wall forming the edge of the garden but it post-dates Treswell.

Ralph Treswell’s Inner Ward plan of Corfe of 1586. The eroding wall is above the well (top right). It is not on the plan so perhaps it was built for Lady Elizabeth Hatton or for Dame Mary Bankes.

Today it was photographed and drawn to scale and Andy will protect it under a geo-textile and clay capping. This will stop the garden structure being worn away. We don’t know very much about the garden but it was probably managed and enjoyed by Lady Elizabeth Hatton who owned the castle from the end of the 16th century or Dame Mary Bankes wife of Sir John Bankes who bought the Castle in the 1630s.

The 17th century wall in trench B was cleaned and the ground lowered on either side of it. In trench A Carol and Kate uncovered the buried wall face of the 13th century building thought to be the enlarged hall of the Castle’s Constable. When in residence he would have managed Corfe and the Forest of Purbeck for the King. 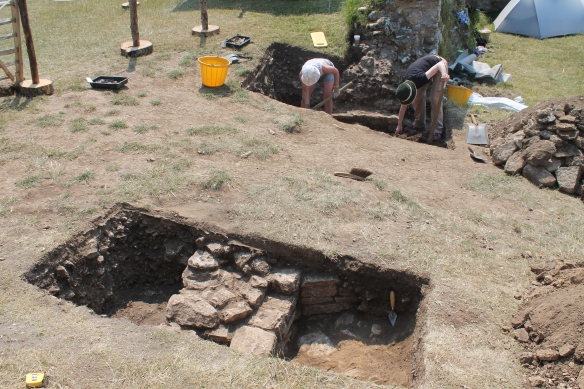 Carol and Kate have uncovered the face of the 13th century return wall of the ‘Constable’s House’. In the foreground the smaller 17th century wall.. after a brush down.

At the end of the day Carol found a ring.. I wonder who it belonged to.