A day to take photographs, make scale drawings and polish the archaeological record. This will be the residue of our days once the trenches ..and eventually we are gone.

Drawing the revealed part of the buried north wall.
Once, it is thought, the 13th century constable’s house. Someone like Richard de Bosco who made sure the Castle was at the cutting edge of military design for his master Edward I.

What of past digs? Thomas Bond in the 1880s left his book on Corfe Castle and a few photographs.. and the RCHM scholars published their article in Medieval Archaeology and created their wonderful Dorset volumes. Volume II pt.1 has their account of Corfe Castle.. still the best .. though we have added something new this week.

But Corfe’s RCHM men were mainly experts in medieval history and architecture. There was so much to say about medieval royal Corfe that Corfe the post-medieval new money mansion got a bit neglected. Queen Elizabeth I flogged it in 1572 and from the Hatton family is passed to the Bankes. Sir John and Dame Mary garrisoned the Castle in support of Charles I, and, following its capture in 1646, Parliament insisted on blowing it to bits. It’s this late Tudor, early Stuart and Civil War knowledge of Corfe that the National Trust’s research over the years has built up. It’s great that Ralph Treswell created his plan of the Castle in 1586 but as we found out this week Sir John Bankes paid for a lot more work on his prestigious new home before its destruction.

One of the lumps of animal bone mixed in the limestone debris on the east side of the 17th century wall.

Carol and Kate spent the last hours digging down on either side of our narrow wall in trench B while the well-cut masonry of the ‘Constable’s House’ was being measured and drawn in trench A.

We have some good information on some of the constables. My favourite is Richard de Bosco who served Edward I in the 1280s-90s. His name shines out as the Castle’s Project Director in the parchment account rolls which survive in the National Archives, London. He made sure that what was required got done. If you know medieval latin and can decipher the handwriting and abbreviations (I can’t but we found someone who could).. they’re a great read (well, if you’re into that sort of stuff). Month by month they detail the repairs to the Castle, naming nearly everyone involved and how much they got paid. Some good touches too.. like the candles bought to enable the craftsmen to work at night “in preparation for our Lord King’s arrival”. 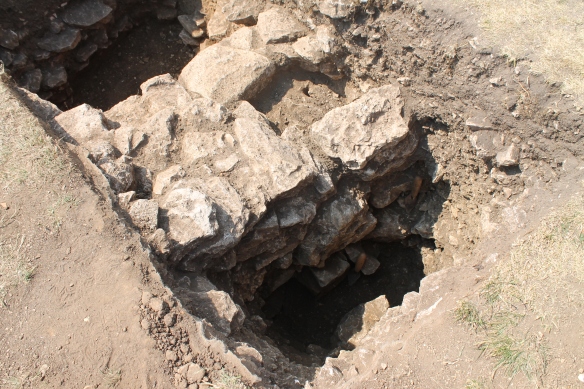 Not a royal wall but a revetment wall. This the rough east side was not meant to be seen built up against a pile of limestone debris.

In the 1630s, the Bankes family called on local builders who did a good job but the wall in trench B was very different to that in A. It only had a good finished face on the west side. Carol uncovered only a rough rubble surface on the east which was clearly not meant to be seen. It was a revetment wall, built to shore up a slope made of limestone gravel and rubble containing animal bones and the odd fragment of medieval pot.

The west side of the 17th century wall. Well built and pointed with orange brown mortar. The sand and rubble peeled off onto a level gravel floor. Pottery dated this floor to the 17th century.

The west face was nicely finished and pointed with an orange mortar. It appeared as good as new, presumably because it had been covered by debris for over 350 years. It was probably less than a decade old before Captain Hughes and his Parliamentarian soldiers did their work. At the lowest level, were a few fragments of green and yellow glazed earthenware typical of the 17th century, just above a limestone gravel floor.

What was this lower west end of the West Bailey used for? The RCHM men give us an idea in their report, though not enough information..”of the later history of the site we have little knowledge except that.. at some date after 1600 the area west of the cross-wall was used as a burial-ground. The most likely period for this later development would be that of the blockade of the castle in the years 1643-6, when the use of the parish church-yard might well have been denied the garrison over long periods”. Sadly no explanation.. how many bodies were found and when? Where are they now? Perhaps a trip to the English Heritage National Monuments Record in Swindon to see if there are extra records there. No grave-like features appeared on the geophys.

What do we take away from this? Well, the obvious..that there is much that we still do not know about this place and particularly its use for the 60 years after Treswell. Our resistivity survey picked up traces of the ‘Constable’s House’ north wall and also the 17th century revetment wall in trench B. We found the very edge of another wall abutting its west side at 45% and the geophysics picked up its continuation south-west, parallel with another feature 6m further south.

On their fold-out map at the back of Dorset II pt.1, the RCHM show a continuous cross-wall (Ben’s Shweppes bottle suggests some unrecorded digging along there) but we found that it was not continuous and not of the same period, but two walls following a similar line but built 300-400 years apart.

We also found that the erosion along the steep slope, from the east to the west sides of the cross-wall, was not causing any damage to the archaeology. National Trust staff have put a geo-textile barrier across the area overlain with clay .. and although the gradient is never likely to look pristine, it can be topped up with soil from time to time.

Someone said this week. ‘I came here as a child and today I’ve come back with my children, it’s so good, it feels just the same.’ Corfe Castle,..Dorset Scheduled Ancient Monument No 1, will always need funding, monitoring, maintenance and conservation repair to enable it to be enjoyed long into the future.

Carol found a shiney new 5p piece dated 2014 and we put it under a stone placed on the quoin of the ‘Constable’s House’. Then the trenches were refilled and we pushed the wheelbarrows back down the hill.

So that’s it. Many thanks to everyone for their help and support. Those who dug and encouraged and particularly the staff of the NT Corfe Tea Rooms.