Long ago, fresh out of school, I was told by Bill my mentor, that archaeology is an unrepeatable experiment.. you destroy what you uncover and you must record it properly. An excavation is never over until its published. This is the heavy weight of responsibility for all who go out and dig holes through ancient sites. 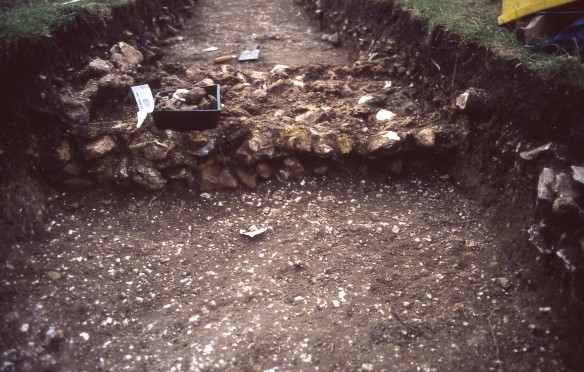 September 2000, a Roman wall footing from Badbury temple. Finally written up and sent for publication yesterday.

So.. part of my guilt trip is almost over as yesterday I sent the written report for Badbury Temple (dug in 2000!!!!) to Paul for publication. Nancy has sent out and gathered the specialist reports, Maggie has assembled her finds illustrations, I’ve got a drawing to finish this afternoon and then it’s done.

But…what if something happens?

Uncovering and recording Sir Ian Richmond’s excavations of 1958 and 1963 of the early North Range baths, Chedworth.

We dug at Chedworth Roman Villa this summer and essentially were confirming something that was dug back in 1958 but never published. Chedworth’s a bit like that, lots of digs but little has been written up. From 1957-1965 Sir Ian Richmond investigated and re-interpreted Chedworth but he died in 1965 and his knowledge was lost to us.

Where were his excavation notes and drawings? They should be at Oxford University because he was a professor there but this trail seemed to have been followed in the past. I was told that the Bodleian Library only had a few notes.

In preparation for the dig this year, I reread the 1979 guide book.. because it has the best description of the North Range baths. In the introduction was a thank you to the archivist at Oxford for his help. I wrote to Roger, the author, and he told me to contact the Sackler Library.. so I did.

The nice lady on the end of the phone said that I should e-mail Graham. “I suppose you don’t have anything relating to Chedworth and Sir Ian….”

“Certainly, a stuffed box file with drawings and notebooks.. when would you like to visit?”

So on Monday I travelled into one of the world’s heartlands of learning..parked and took a double-decker into the ‘city of dreaming spires’. First to the vast Neo-classical Clarendon Building, where I handed in my form and was issued with a pass card. I had to read aloud a declaration saying that I would not light a fire or take a naked flame into the library… I agreed.

Then down Broad Street, past the Ashmolean and the Institute of Archaeology and round the corner to the Sackler. I pushed open the heavy double doors into the circular vestibule watched over by a porter (bit Harry Potter). Graham met me and swiped my card to give me access to the library. He led me to a desk containing a box file and various brown envelopes. Each one contained wonderful things (quite a personal sense of wonderful). Graham left me for a while and came back with notebooks and rolls of drawings.. 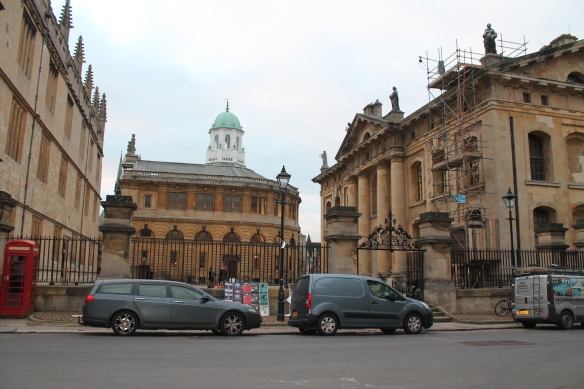 Clarendon House, Oxford which issues access cards for the library.

Part of Sir Ian Richmond’s archive within the Sackler Library his and Eve Rutter’s notes in guide bookss from 1924, 1955 and 1963, notebooks, correspondence and drawings.

Just a few hours to make a record of Sir Ian’s archive. This was what I had been hoping for. Here were his thoughts written in the notebooks, comments written in draft guides, and correspondence and manuscripts for articles and reports. The drawings showed plans and sections of his excavations. Very little photography though and there should be other drawings. I must make another trip in the Spring, not only for Chedworth but also to look at his excavation records for the Iron Age hillfort at Hod Hill in Dorset.

This felt like a great discovery and Sir Ian’s records will certainly be a guiding light during our future work at Chedworth.