The National Trust looks after about 50 hillforts and promontory forts in the south west.

Archaeologists don’t agree about what they were used for (they don’t tend to agree).

Over the 500 years or so hillforts were in vogue, I like to think that their role fluctuated over time. In Dorset, I’m pretty sure that the impressive fortresses within the county usually fulfilled their traditionally believed role, as a place people could live in securely, particularly in dangerous times. Digging deep ditches and building massive ramparts with primitive tools would take a long time and surely not something to be done unless there was a real need.

Reconstruction drawing of Badbury Rings, Dorset by Liz Induni for the National Trust

Badbury Rings in Dorset is the highest hill in the area. There are good views out in all directions, surrounded by three concentric rings of banks and ditches. Apart from these massive earthworks what other evidence might be found to suggest it had a defensive function, a place that may have witnessed conflict.

Finds of weapons and projectiles would help. Over the years there have been stories of finds.

About 200 years ago someone ploughed up a leaf-shaped bronze sword in a field on the west side of Badbury and one of the National Trust rangers found a bronze axe in a drainage trench in 1990. These are about 3000 years old and show that Badbury hill was important before the Iron Age.

Late Bronze Age palstave axe which fell out of the side of a drainage ditch south-west of Badbury.

I have often wondered what happened at Badbury during the Roman Conquest. Did the local people strengthen the hillfort against Roman attack. The native people of Dorset are thought to have been known as the Durotriges and they refused to surrender their land to the Romans without a fight. After defeating the more powerful tribes in the south-east, the future emperor Vespasian was sent with the Second Legion Augusta to mop up the west. 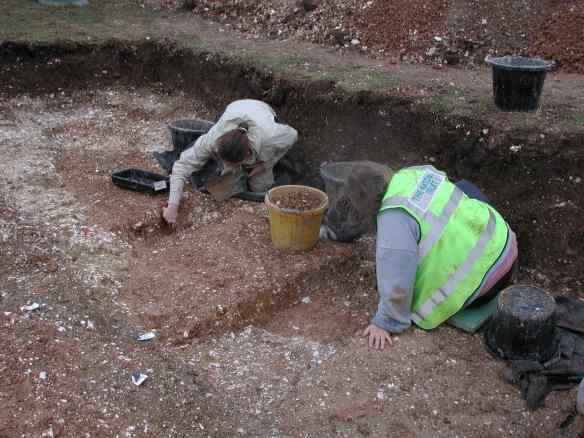 2005 Excavating a drip gulley dug around a round house built within Badbury Rings about 2000 years ago.

His soldiers conquered the Isle of Wight, defeated two warlike tribes and captured 20 fortified settlements. The fleet entered Poole Harbour and a military supply depot was established at Hamworthy. A road was built north up to the River Stour and a half legionary fortress was built. It was discovered in the 1960s and would have housed at least 2000 soldiers. It is just a few miles south of Badbury Rings close to the modern town of Wimborne Minster. 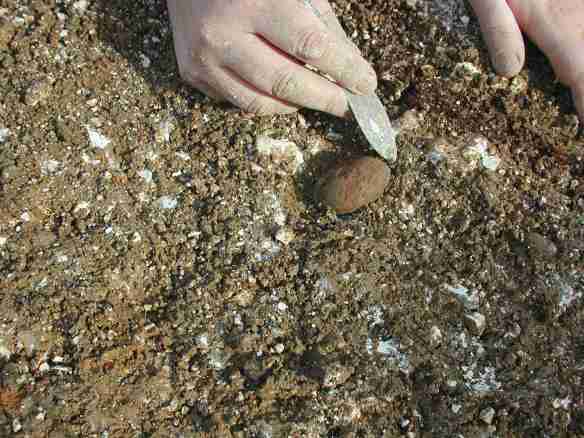 Badbury Rings has a geological capping of ovoid pebbles, perfect as sling-shot ammunition but apparently not good enough. This one was made from baked clay. Presumably made to the perfect weight and size to hit the desired target. We found it against the inner rampart of Badbury Rings in 2005

The Durotrigan forces would try to hold the Romans at the river crossing or defend the first stronghold (Badbury) north of the river. Recently an archaeologist watched while ponds were dug on the National Trust land on the north side of the river beside the legionary fortress. Nothing was found..

Evidence of conflict seemed unlikely, perhaps the locals gave in without a fight. Faced with a disciplined fighting force it would make sense…. but back in 1952 a javalin head was found stuck into the chalk beside the Roman temple site at Badbury. Then in 1963 a spearhead from a Roman artillery ballista was found about 500m from the hillfort beside the Beech Avenue. These were just two random finds… until a couple of weeks ago when the metalwork report came back from our excavation in 2000 at the Badbury temple site. Jorn had found among the earlier finds, two iron projectile heads which were typical mid-1st century AD ballista bolts. 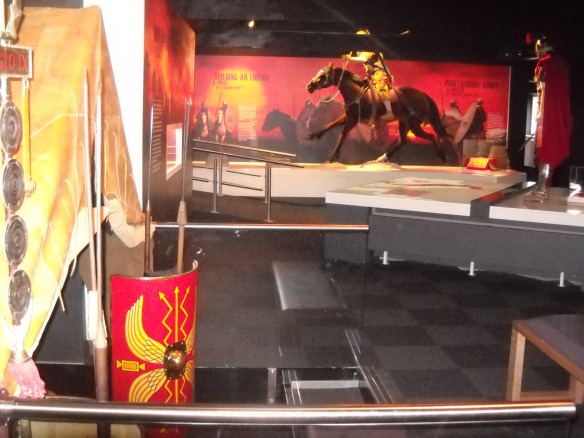 The Roman military museum on Hadrian’s wall spear-heads, javalins and ballista projectiles in used by the legions and auxilliaries

Badbury has witnessed many events, these days it’s mostly sheep grazing and picnics but these finds seem to be scattered leftovers, stray finds, perhaps from a desperate struggle for Dorset independence lost almost 2000 years ago.

6 thoughts on “The Conquest of Badbury Rings”