Dyrham in South Gloucestershire is having a new boiler fitted and because there is so much potential archaeology in the area the NT is making sure that the pipeline trench from the boiler to the house is watched as it is being dug.

Dyrham House dating from 1690s on the site of Tudor and medieval manor houses. It is covered in scaffolding at the moment as the roof is being repaired. We have taken the opportunity to survey the roof timbers and take tree ring dates. There are a lot of reused pieces of wood in the roof. Evidence of recycling of earlier buildings.

It follows the line of the back entrance to the house leading from Sand Lane approaching the house from the south.

The house is late 17th century but it replaced a Tudor house which replaced a medieval house which lies near a Roman occupation site. The trench is an opportunity to see any buried archaeology beneath the surface.

Last week, Paul, the archaeologist carrying out the watching brief, phoned to say that he had found a bone and he thought it was human. Beneath the back entrance track was an earlier trackway which had been built on silt backfilling a quarry. Perhaps medieval in date. But within the silt was femur which he was sure was human. 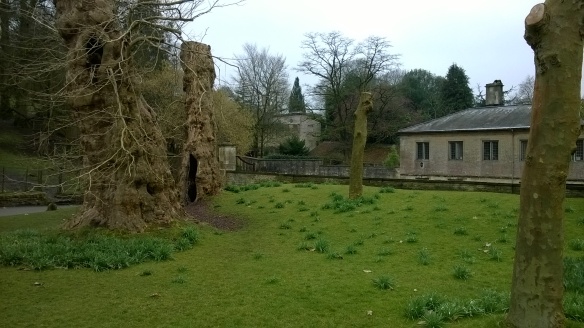 This is the back entrance to Dyrham. The trench for the new heating system has been dug along the track which runs in front of the building and behind the hollow trees. The bone was found up the track to the left of the picture.

He quickly sent it to a bone specialist who confirmed his suspicions…but what was an isolated human bone doing there? Where did it come from? The grave yard lies beside the medieval parish church which lies on the north side of the house.

Beyond the entrance track to the east, the land rises and the long abandoned quarry is a grassy hollow. Above it is a level area. Perhaps the quarry cut a burial site there and the bone fell out of the section and rolled down the slope into the quarry.

We must wait for a radiocarbon date and we will carry out a geophysical survey in this area in September. Perhaps we will fine evidence for the site of a Bronze Age or Neolithic burial mound, a formal cemetery or perhaps an isolated grave from a long forgotten crime or even an erratic scatter of burial pits, a rapid tidying up of the fallen after conflict…

1 thought on “Dyrham the Biomass boiler and the thigh bone”