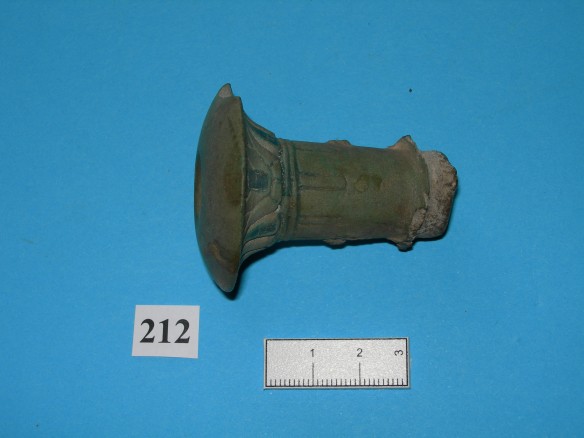 A piece of Egyptian pottery found at Kingston Lacy

The picture above is just to whet your appetite for what is to come, which may look less fancy but is more exciting 🙂

A few years ago while carrying out an archaeological watching brief in the cellars at Kingston Lacy, Rob Gray, the house and collections  manager, asked if I had ever seen the pot sherds he had found in an old fruit box and that he had re packed into a better box.

I was expecting to see some of the local 18th/19th century Verwood  earthen ware, and waited until tea break before I ventured into the main office. On the table was a large plastic box with individually wrapped sherds of various sizes. Rob took one out and unwrapped it and past it to me. It was not Verwood or any local earthenware, it  quickly became clear it was older and much more important. The pot sherd  had writing all over one side in a script of I could not read, but knew it was ancient and was not Latin!

Pottery sherd with writing on one side 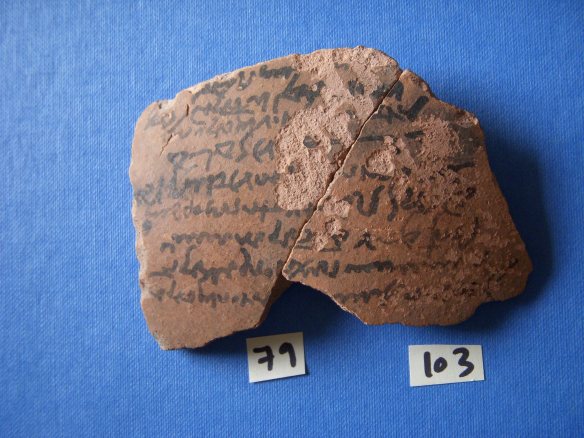 Two pieces that went together

We choose a  couple of sherds and scanned them, so we could e-mail them to experts at the  British Museum, hoping they maybe able to shed some light on the language, and possible date. We were also hoping they would be able to transcribe them so we could unlock the messages. We soon got a reply but it was only half what we hoped, they said  that they were Egyptian and the script on the ones we sent looked like Demotic, and Greek script but they had no-one at the time who could translate them, based at the museum!
Though they could not help they put us in touch with Professor Tait at University College London, he offered to help and  said he would be able to put us in touch with others who could read all the different languages. We then set to the task of recording the sherds on record forms and counting how many we had. It turned out that there were 212 sherds with 175 having text on one or both sides. We also took the chance to see if we could find any that fit together.

All the sherds spread out in the study centre at Kingston Lacy, Rob, the collections manager and two student placements helped to record them

It was while working on the pottery in the study room that an education volunteer suggested that Joanne, a daughter of a friend would be able to help us as she was studying Egyptology and scripts at Oxford University. When I contacted Joanne Rowland it turned out she was an ex pupil of Professor Tait and knew he was ill at that time but she would ask him if she could  take up the challenge of researching the sherds. Joanne also passed on an enquiry from the Victoria Museum in Uppsala in Sweden, who had a similar collection and thought that  some of our sherds may fit with there’s!

A large sherd, we are not sure if we have photographed it the right way up!

Joanne also made contact with Brian Muhs at the time working in Leiden University in Holland, and now Associate Professor of Egyptology, Oriental Institute and Department of Near Eastern Civilizations and Languages, University of Chicago. Brian was able to tell us that one of the two sherds he had seen was a fragment of a letter from the reign of Emperor Antoninus Pius 138-161AD. He kindly offered to look at the rest and try to transcribe them.

Brian Muhs, working on the ostraca in Kingston Lacy

The sherds are called  ‘ostraca’ (plural of singular ‘ostrakon’) is an ancient Greek word for broken pottery  inscribed with a person’s name, they were used for voting in  ballots to exile unpopular members of a community, who would then be ‘ostracised’. Archaeologists now  apply the term ‘ostraka’ in a broader sense to any pottery fragments bearing writing of some kind.

In ancient Egypt, sherd of pottery were readily available, more so than papyrus, and were used like ‘scrap paper’ to write short notes, letters, receipts, rough drafts, and to make calculations, from the beginnings of writing in the 3rd millennium BC until the 19th century AD

Some of the ostraca were found to fit together, not obvious from the breaks but from the scrip

The ostraca are of different ages and in different languages, 125 of them are in Greek, 42 in Demotic Egyptian, 6 in Arabic, 1 in Coptic and 1 in Hieratic. ‘Hieratic’ is the oldest written script of Egypt and was based on hieroglyphs, but better suited to writing court reports and official documents. ‘Demotic’ is similar, and took over from Hieratic in about 660 BC. ‘Coptic’ was a written form of the same ancient Egyptian language, devised in the second and third centuries AD with the spread of Christianity, but written using the Greek alphabet, with several new characters not found in Greek. Greek became an official language after Alexander’s conquest in 332 BC, and the Arabic language was adopted in Egypt following the spread of Islam in the 7th Century AD.

A piece of a lid with writing on the underside

Evidence suggests that these ostraca came from the island of Elephantine in the Nile, opposite Aswan near the southern border of Egypt.
So what is written on the Kingston Lacy ostraca? At the moment we are getting a good  idea but a lot are still being transcribed, but  a picture of their contents is starting to emerge. Those in Greek, look to be mainly receipts for payments including income tax, utilities tax and mortgage loans, much like we have today! They date from 200AD during the Roman occupation of Egypt. The Greek ostraca include;  poll tax paid by a farmer, a loan for a mortgage to the son of an undertaker, tax paid on handicrafts and  income tax from production of fruit probably dates.

Those in Demotic are believed to be names of priests from the local temple, specifying the names of those who ‘stood before the god’ on a given day. The  rarest piece, the Hieratic potsherd, and  also the oldest, dating from the 2nd millennium BC is believed to be a draft of a letter or a school exercise on which a scribe would have learned to write by copying texts.

Its amazing what we can learn from these broken pots, we can even identify that at least 16 of the tax receipts in the collection were issued to the same taxpayer, Patsibtis, son of Petorzmethis. The same man is also a taxpayer on at least twenty-four Greek tax receipt ostraca in the British Museum and other museum collection!

I would like to record here our thanks to all the academic specialists from the University of Leiden, in Holland, that have given their free time to the transcribing and translating of the ostraca. The work is led by Egyptologist, Dr Brian Muhs, with  Prof. Klaas Worp, Dr Tasha Vorderstrasse, Dr Jacques van der Vliet, and Dr Robert Demare.

We will post more information about the ostraca in future posts there is too much to post in one go 🙂 If you would like to see a sample of the ostraca, some  are on display at Kingston Lacy, Wimbourne , Dorset in the Egyptian room, along with more items collected by William John Bankes including amulets, carved scarabs and beetles; many tomb statuettes and funeral stele from Thebes, and a four-foot high free-standing figure of Rameses II. There is also an inscribed obelisk from Philae and a stone sarcophagus of Amenomope, shipped back by Bankes from Egypt, located in the garden in front of the house.

Brian Muhs, Associate Professor of Egyptology, Oriental Institute and Department of Near Eastern Civilizations and Languages, University of Chicago.
working on the Ostraca in Kingston Lacy House

3 thoughts on “You say ostraka I say ostraca ..”