Today I got chance to do some post excavation work on the Roman pottery we dug up at Chedworth last year.

After washing the pot it has to be marked with the  information about what site it was found at and in which layer (context) it comes from. We do this with dip pen and ink, and we have to mark it with writing as small as possible. But not too small to see, I had three 15-year-old placement students, who all decided to see who could write the smallest, I needed a magnifying loop to see it! 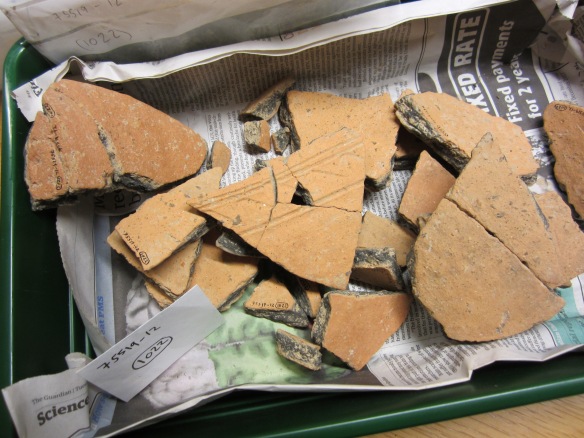 At the same time we can often see that some pieces fit together, and we can get the glue out and do a bit of sticking 🙂 We use glue that can be easily undone if it goes wrong!

It’s exciting as all the  pottery is going, for closer dating, to a specialist for dating, it’s some of the only pot we have from recent work at Chedworth, that was in an original roman layer when we found it. It will give us a date for the corridor mosaic (see earlier post) and help sort out phasing like when the earlier villa  building was abandoned and the new rebuilding work done. We will let you know the results when we get them 🙂

The way pottery is identified is first by the clay and the added things in it like shell, flint, grit, grass and ground up pot. Then we look at the form (shape) of the pot, especially the rim and base profile, also any decoration or surface treatment, like coatings or burnishing (shiny) 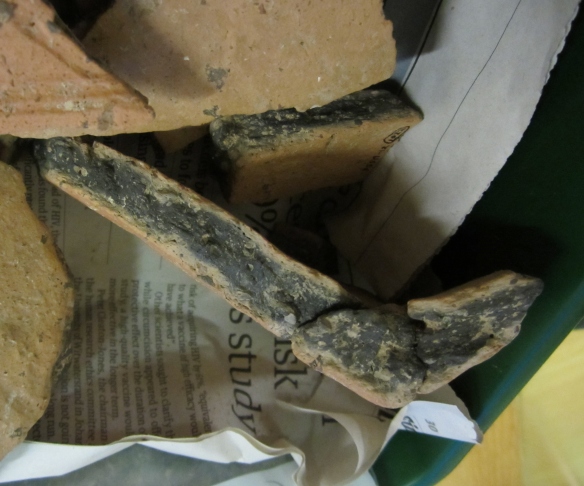 The profile of the base