This is quite a retro post. One of my first jobs with NT. 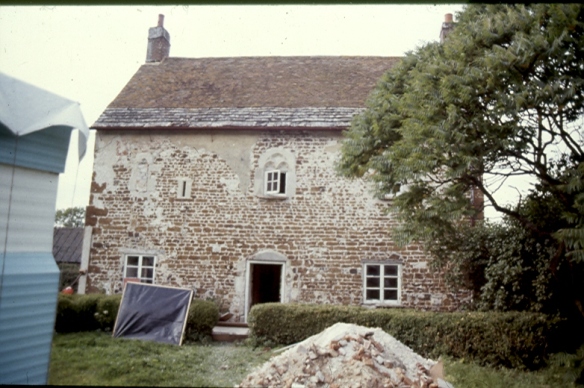 Lodge Farm with most of lime render. Easy to understand that it could be mistaken for an 18th century cottage but the thick walls and the gothic window tracery were clues to its early history once they were revealed.

While I worked at Lodge Farm, songs like ‘Thorn in my Side’ were blasting from the builders’ radios and as I measured roof trusses in the attic, drifting up from the living room, the sound of Stephen’s guitar ‘Free Nelson Mandela’.

The medieval roof was open to the hall below in the 15th century but in the Tudor period a floor was inserted. The roof timbers were later hidden by layers of lath and plaster and reed. Behind this we found a 17th century spur, musket shot and a leather purse.

Lodge Farm happened while I worked on the Kingston Lacy Estate in SE Dorset. I was asked to be the archaeologist who recorded the building while it was refurbished. It was a luxury. I had the summer from May to September to photograph and draw it and to then excavate where the architect and structural engineer required me to dig. 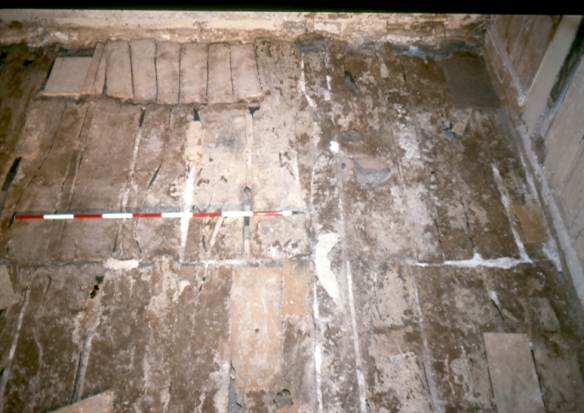 The original oak floor walked on by the medieval occupant of the lodge, the head forester and park keeper of Kingston Lacy survived beneath the brick floor . The wood grain pattern shows that the boards were cut from the same tree dendro-dated to c.1420

Stephen had answered an advert placed by the land agent of the Bankes Estate. An 18th century cottage needed a tenant. It was quite isolated, half-way between Kingston Lacy House and Badbury Rings hillfort.. but he took it on. He soon noticed that the walls were very thick and of stone. He looked in a cupboard and found a very ornate arched window head. He started to think the place was much older. It was in a bad way though. There were deep cracks in the walls and when he went upstairs the curious brick floor had caved in. Then the National Trust was bequeathed the Estate by Mr Bankes and they took on the responsibility.

Stephen stands by the 18th century doorway cut through a medieval window. The severe cracking in the wall to his left was the reason the building was underpinned. The doorway in the centre of the picture once gave access to a room known as a garderobe (latrine).

By 1986, NT had drawn up a plan to repair the building but it would require the walls to be underpinned because the foundations had apparently failed. After drawing the roof timbers and floors, I went outside and hand excavated the underpinning trenches.

The structural engineer stated that each trench should not be more than 1.2m long and no closer than 3m to the next. Once each trench had been dug, the foundations were reinforced with concrete. I gave each trench a letter in alphabetical order and assigned layer numbers to each.

Our first trench hit chalk natural at about 0.3m

This turned into a game of battleships to find the archaeology. Trench A at the south-west corner of the building..natural chalk bedrock at 0.3m. Trench B at the south-east corner..chalk bedrock at 0.25m…yawn. Trench C centre of the south wall chalk bedrock….where was it? Below the Victorian stuff, a fragment of Tudor pottery and below this clay tile and then a fragment of stone mortaria.. then a few oyster shells and something that looked like medieval cooking pot. Chalk was reached at 1.8m, at the curving base of a deep wide ditch. 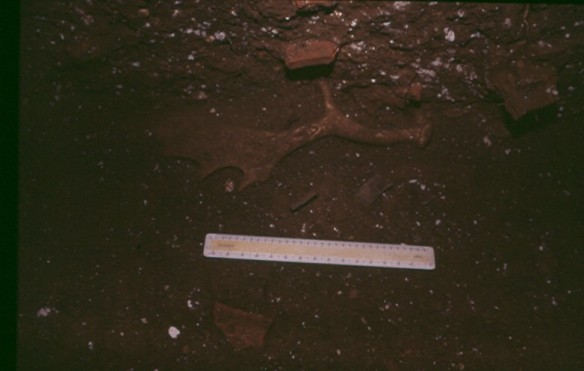 The deer park ditch filling contained evidence of an earlier hunting lodge that was demolished in the 15th century. Here is one of the fallow deer antlers that demonstrated Lodge Farm’s link with the medieval deer park. There are also fragments of medieval cooking pot and clay roof tiles visible.

The archaeology showed why Lodge Farm was collapsing. 600 years ago it was built on Kingston Lacy’s deer park ditch 3m wide and 1.5m deep, it ran under the south wall, turned in the centre of the building where we found a post-hole for the park gate and then out under the north-west corner of the building. The north side had a number of fallow deer antlers in and also rabbit bones along with ferrets used by the medieval warreners to flush them from their burrows.

This underpinning trench coincided with the centre of the deer park ditch and was almost 2m deep.

In another trench we found some flinty pottery that looked a lot earlier. There were post-holes, ditches and a deep pit. The Lodge wasn’t the first use of the site. 2,500 years ago there had been Iron Age farmers here.

After the digging I wanted to know more. I took a trip to Dorchester and met Sarah the archivist. Mr Bankes had given all his family records to the National Trust and these included medieval accounts rolls for Kingston Lacy. They are on parchment, in a hard to read short-hand and in medieval latin. I had no chance of understanding them but Sarah had the skill. As she unrolled the first yellow document and weighted it down she said ‘they’re usually just summaries. It’s highly unlikely that any of them will refer to a single building’.

This was the account for the year from Michaelmas 1422-23. After a while she paused and read to me ‘the expenses of the park and warren of Badbury’ ..repairs to the park pale…. straw purchased to feed the deer in winter this year…underwood cut within the park…and on payment of 6d to William Hellier for two days work roofing the Lodge and …on the cost of two keys purchased, one for the park gate and for the door of the lodge there.

It’s good when fragments of history and archaeology merge and blend.

She rolled down the scroll a little further ‘and on the expenses of the repair of the manorial buildings of Kingston Lacy’…. 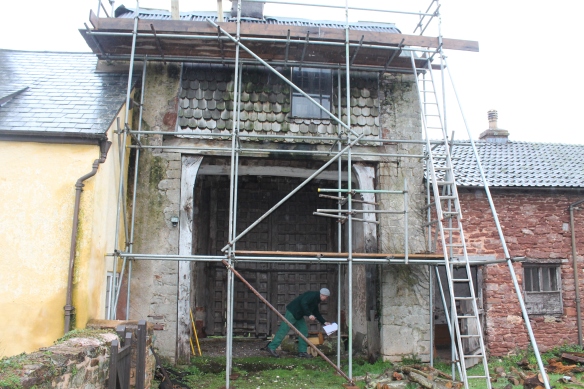 This is a gateway that now leads to nothing but a patch of grass.

Above is a gatehouse with windows and roof timbers typical of the medieval period.

What was it for? Where did it lead to?

It is all that remains of the old manor house, once the centre of the 12,000 acre Holnicote Estate in West Somerset. It burnt down hundreds of years ago but this gatehouse somehow survived surrounded by later workshop buildings.

Chris the building surveyor took me there on Monday. It needs a roof repair to protect the timbers from damp and at the same time we will carry out tree ring dating to get a precise date for its construction.

As trees grow they create annual rings and the pattern of rings depends on the weather. Timbers with 50 rings or more create a unique pattern that can be precisely dated, especially if there is sap wood surviving at the edge.

For Horton Court in Gloucestershire we had a date of Spring 1517 for the construction of a garden building, which is extraordinarily accurate when compared to other dating methods like Radiocarbon analysis.

The gatehouse is one of hundreds of buildings on the Holnicote Estate. Many are very old. We visited a cottage in Tivington made of earth and stone. The tenants love their home and told us about the smoke in the attic and the cattle in the kitchen.

Where do archaeologists go to find the age of buildings? The best place is often the roof because it is generally the least lived in and therefore least changed. The roof timbers of this cottage showed smoke-blackening.

This was first built as a medieval long house. Livestock at one end and the family in the other with a timber cross-passage screen between and open to the rafters. No fireplace, just an open hearth with smoke wafting up and blackening the roof timbers.

So many generations since then.. inserting Tudor floors, Jacobean fireplaces, 18th century bread oven, new windows in the Victorian window and now the colour HD TV plays cash in the attic as we discuss the cracks in the walls. 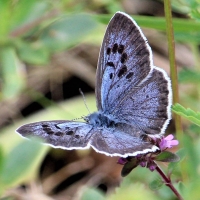 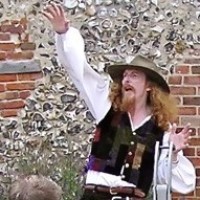