This is a recipe for finding a medieval Christmas.

The front door on the north side of Kingston Lacy House, Dorset. This house was built for Sir Ralph Bankes in the 1660s …long after medieval Kingston Lacy had gone.

Stand at the front door of Kingston Lacy House with your back to the mansion and look out into the parkland. Open wide your arms in line with the mansion wall and then bring your hands together straight in front of you.

Follow your finger-tips and walk back in time across the grass.

Kingston Lacy House and Park from the air. The front door is on the right. You should be walking out across the grass towards the upper-centre right hand edge of the photo.

Pace 200 steps along a long broad ridge: in the 18th century, this was Kingston Lacy’s entrance drive.

Now stop and turn left through 90 degrees and walk 80 paces towards the trees. First you will feel the ground slope down from the earthwork of the drive, and then, at 70 paces, you will begin to rise up again over the buried walls of medieval Kingston Lacy.

Now close your eyes and set your time machine dial to Christmas 1371. The trees will disappear, walls will spring up around you and your feet will sink through the fading grass, down to the great hall floor

The sort of clothes you will need for your late 14th century party. The bowler hat seems unexpected.

You are now in John of Gaunt’s manor house. This is a great occasion: you are surrounded with guests and tables laden with the best food. He has invited his father King Edward III and set aside £25,000 from his treasury to cover costs. He has sent out orders for food and provisions to be brought from surrounding estates to make sure everyone has enough to eat.

This is a glittering assembly of the very finest of English society and John wants to show off his new bride Constance Queen of Castile.

He has a hierarchy of presents to give to everyone ranking from his ‘redoubtable over-lord and father the King’ down to his ordinary servants.

In the fourteenth century things were done differently. Presents were given on New Year’s Day rather than at Christmas.

Edward III received from Constance a pair of silver slippers, gilded and enamelled and decorated with white and blue silk. John bought a gold brooch for Sir Hugh Calveley, the marshall of his private army. To one of John’s Spanish knights he gave a silver casket and to an ordinary esquire he gave forty shillings: very generous.

Unfortunately…. at the moment….. we do not have a time machine but archaeological detection has mapped out the medieval buildings and John’s surviving letters and accounts have given us the story of this stunning Christmas party. During our small excavation in 1997 we found the glazed floor tiles he and his guests would have walked upon and remains of the food they ate including oysters, mussels, venison and hare. 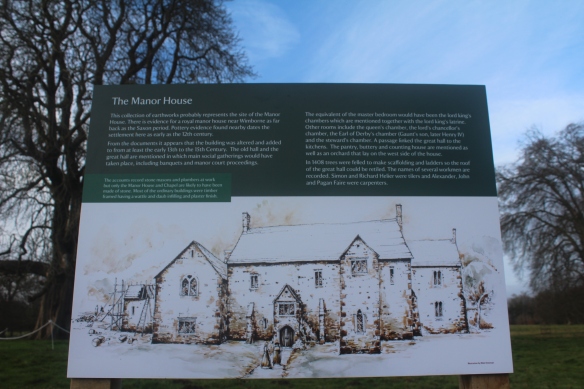 Every now and then the National Trust interprets the site and sets up interpretation panels to tell the story of the parkland humps and bumps that cover the remains of John’s house.

There would be many more 14th and 15th century Christmases at the great house of Kingston Lacy. John’s son would be crowned Henry IV and his grandson Henry V.

This place is now quiet but back then of course it would have been noisy, busy and vibrant. The documents tell us that around the royal manor house there were courtyards and many buildings including stables for the fine horses, a chapel for services, kitchens, a bake house, a granary and other store houses.

Stand in the park and look around and try to imagine the richest and most powerful in the land meeting here 650 years ago. 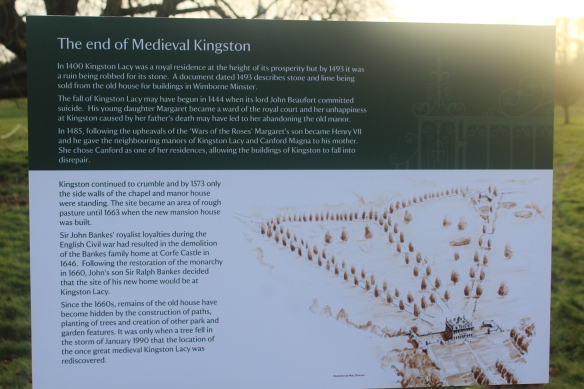 So what happened? In 1485, Henry VII gave Kingston to his mother Margaret …but, for her own reasons she did not want to live here and so the buildings were allowed to fall into disrepair.

The place became a quarry and the best stone was taken away. By the time the present Kingston Lacy House was built, everyone had forgotten where the old house was. Then a few years ago a tree blew over in a storm and medieval Kingston Lacy was rediscovered in its roots.

If you take a walk here and look in the mole hills you will still find clues and traces of those long forgotten parties. 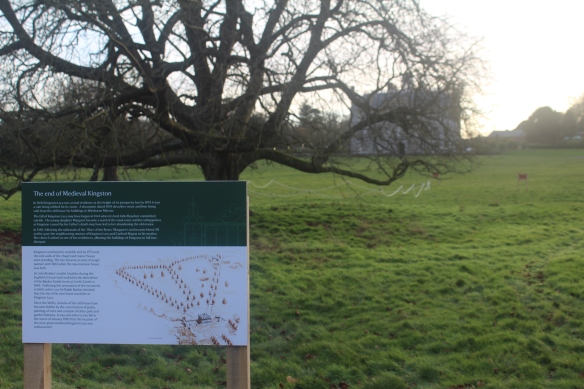