We had walked all day…beginning at 8am on the wrong side of the M4. Kate told us 5pm was the deadline to complete the walk. She needed the train to London.

Now, weaving through the smart, city-busy shoppers and tourists, our goal seemed unlikely to achieve. Then, the Royal Crescent and Circus were behind us. We headed for the Pump Room and Baths …it might be possible. As we approached the Abbey Tower the mechanism was whirring. ‘Come on Kate!’ I touched the stone as it struck one, Emma at two. Kate pulled a face.. paused… and touched on the stroke of 5.

Walking the Cotswold Way has been an ambition for some years now. Long distance walks have been a hobby since the 80s. The beginning was the Pennine Way ..which is raw, bleak and wonderful….but the peat bogs, the peat bogs.

The Cotswold Way is extraordinary in a different way and very beautiful, particularly in May, so, as a significant birthday approached, I persuaded my daughters to accompany me and took the train to Honeybourne.

The route of the CW is a like a string that ties a series of National Trust properties together.. many have not previously featured in this blog and therefore our journey will be an excuse to unfurl them for you. 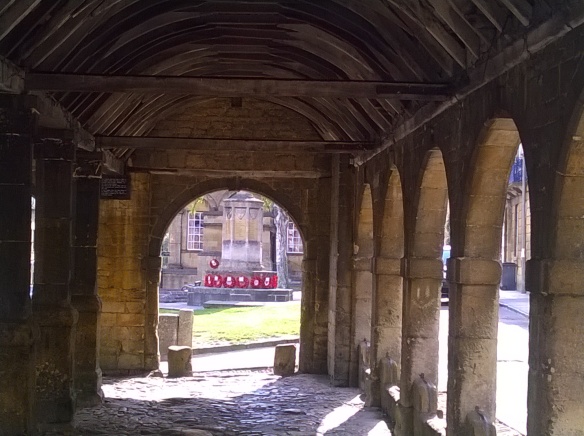 Chipping Campden is the beginning of the walk: One of those essential Cotswold towns. The end marker stone for the walk is at its centre beside the Market Hall (cared for by National Trust) built by Sir Baptist Hicks for the town’s merchants in 1627 . The other NT property is further along the street beside the parish church. The Coneygree was once a rabbit warren but is overlain by the earthwork remains of 17th century designed garden features, part of Sir Baptist Hicks new Campden House (now a ruin) completed c.1610.

However, during the English Civil War, after a short life,  the property was occupied and fortified by Royalist forces and then abandoned… and left as a burnt out shell to prevent its re-use by the enemy. 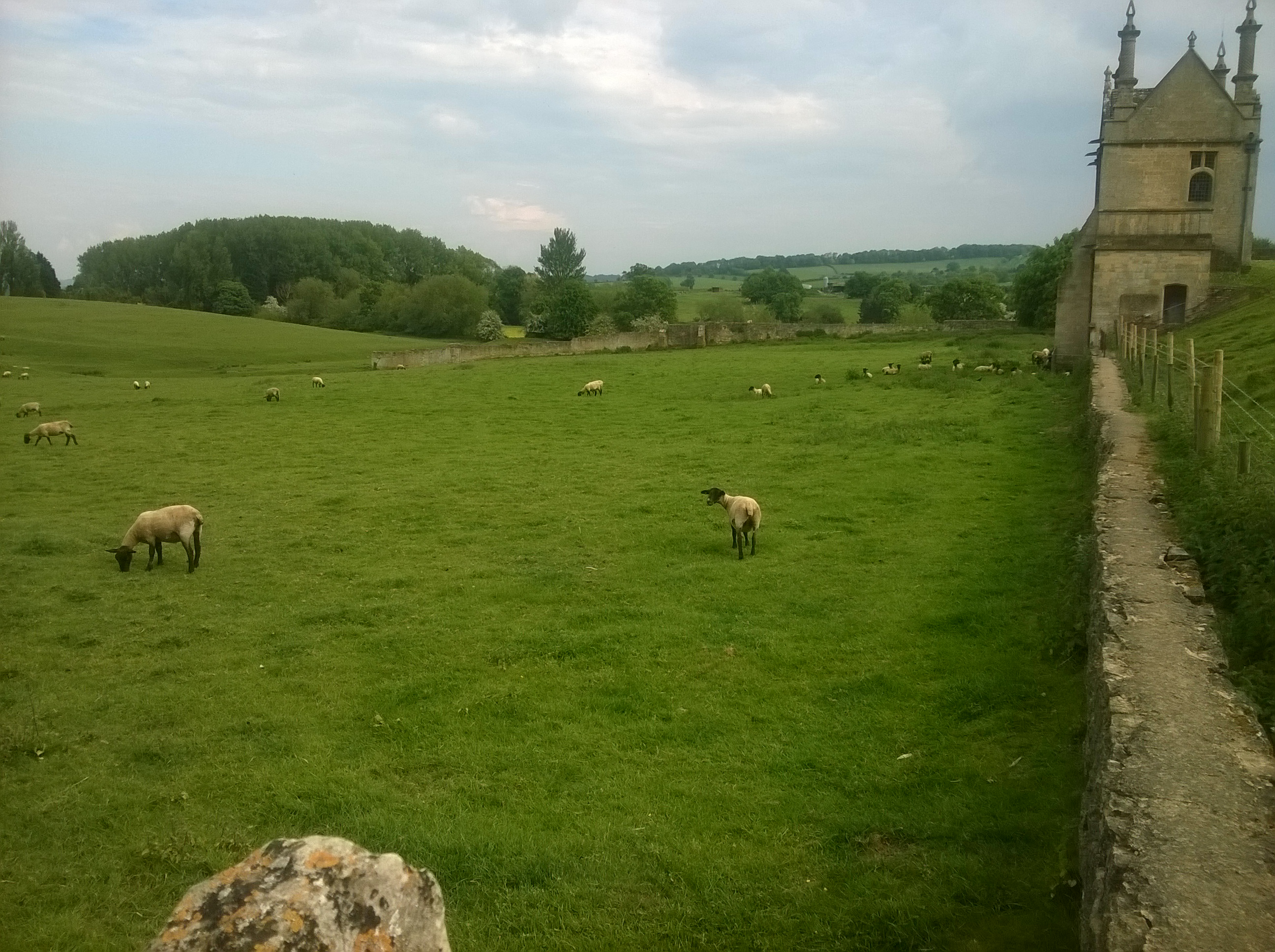 The Coneygree next to the site of Campden House.

Usually a walk will interweave with fellow travellers and sure enough on the first morning, the arrival at the start stone coincided with a family from Iowa. We took group photos for each other to mark the beginnings of our treks. 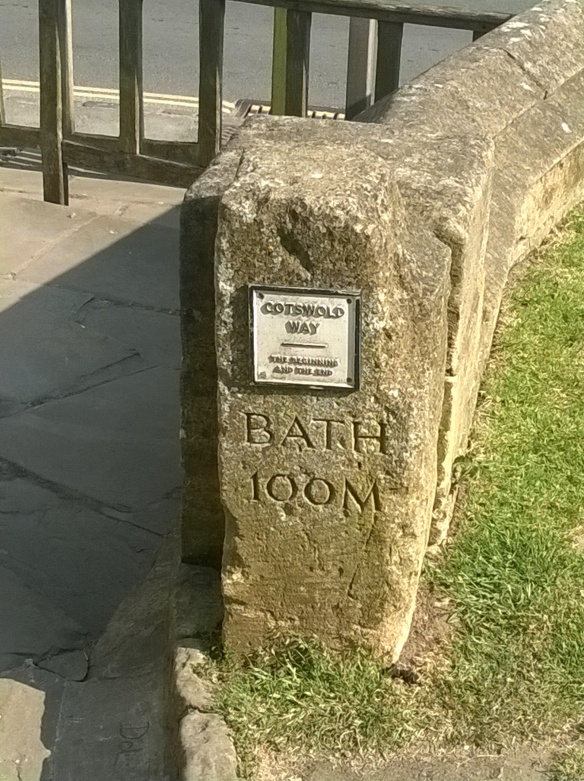 A hot day, we climbed out of the town and soon realised that carrying our packs all the way to the end was quite deviant. There were sherpa services that could do all that for us these days and our fellow walkers travelled much lighter. The father and son from Iowa cruised past us as we stopped in a field for a break.

Then, at the top of the rise, was NT’s Dovers Hill which, of course, as we should all know, is where the Olympics Games were revived in 1612 or Olimpicks as Robert Dover named them. Back then, among other events, they included shin kicking and dancing. Closed in the 1850s, because of Victorian sensibilities it seems, they restarted again in the 1950s and in between these dates, in 1893, the modern international games began. We were just a few days too early for this year’s games though the flyers had been in the windows at Chipping Campden. 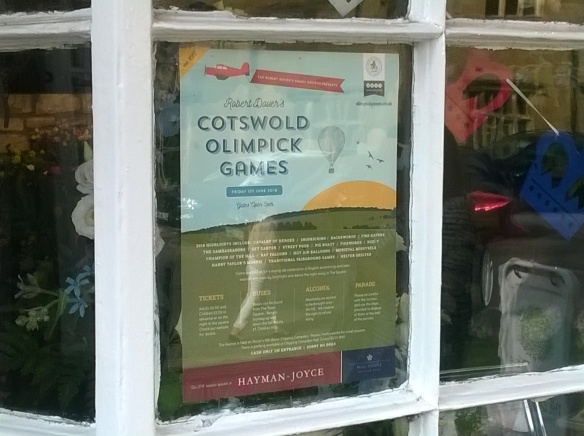 Our feet walked over the undulations of ridge and furrow, now grazed by sheep, evidence that some of this land had been part of the common arable fields of the town in the medieval period.

Soon we were crossing newly ploughed land and, out of habit, my eyes were drawn to the ground. A flash of grey-black, foreign to the Cotswold stone,  and I reached down and handed Emma a flint. Nearest chalk is that of our Wiltshire homeland, upwards of 50 miles away. It had been brought here for a reason and sure enough the flint had been worked to create a tool. It fitted snugly between our thumbs and forefingers. Probably lost or discarded over 3000 years ago.

The girls laughed that a vlog  should be created of the walk to include a look-book and top tips of the day. It was not to be…but if there was a top tip for that day it would be…don’t put sun-screen on your forehead. Why? Because it mingles with the perspiration and irritates the eyes (an unexpected consequence of the long slogs uphill). 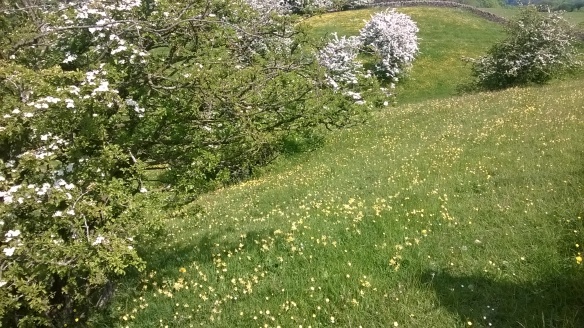 The NT land approaching Broadway Tower was a delight. A yellow wonder of cow-slips and buttercups and all the hawthorns far into the distance were snow-white with flowers. Emma went up the tower for the William Morris room because of her  interest in the Arts and Crafts Movement (he believed that even a worker’s desk should be made to be inspiring work of art). We had tea and descended into Broadway itself. 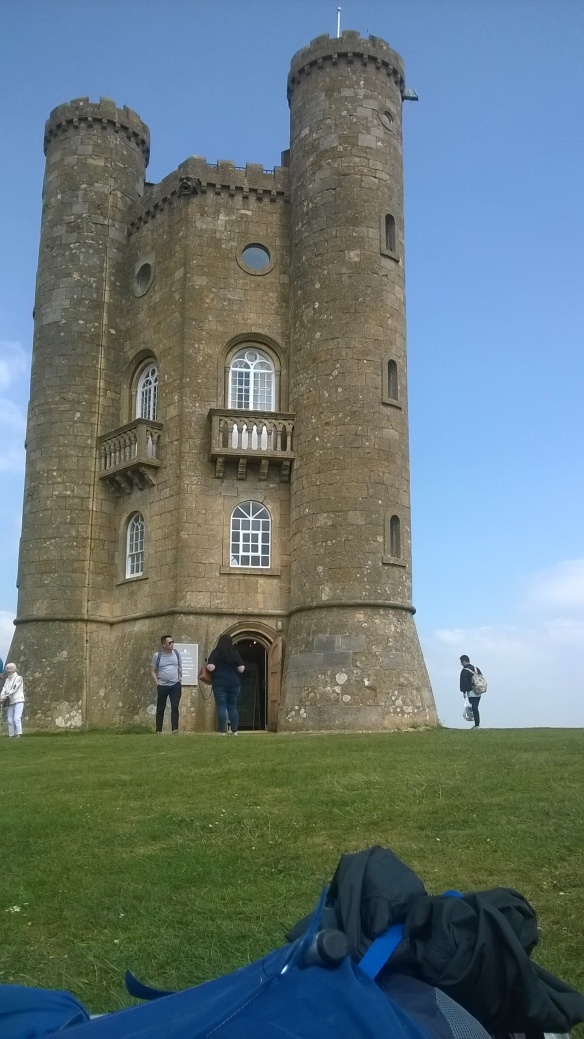 This is a Waitrose plus-plus location, and tired walkers seemed out of place amongst the Scandinavian spa treatment, antiques and restaurant establishments. Amongst all this, we squatted under a tree for shade with our expensive deli lunch and then headed back out into the wild.

The Cotswold Way is a National Trail and well marked …but alternative routes can be problematic.. as we found when we took the Snowshill diversion. We tangled with a crossroads of paths at an unfriendly farm where signage was limited and confusing. We followed false trails and scratched our heads for a while.

Afternoon, and we had lost our first sparkle.

When we found the right route…in places the path was overgrown and difficult to follow ….but we eventually turned up at the ticket office. Kind people looked after our bags in the office but warned us that last entry to Snowshill Manor was 4.20.

Kate advised that there was enough time for a cream tea. We found a table under a parasol and drank gallons of water and tea. Emma favoured strawberry but we had a strong belief in blackcurrant jam.. and isn’t it extraordinary how finely everything tastes when you truly need it. 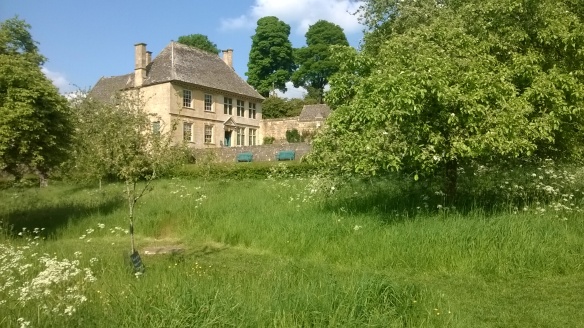 Charles Wade, during WWI, said that if he survived he would buy Snowshill and he did, so subsequently created and housed his great collection there. The NT now cares for this 15th century manor house full of so many fascinating and curious objects including oriental cabinets, suits of armour and musical instruments.

We met Jenny outside. She is one of the National Trust archaeologists with another job, House Manager for Snowshill. She has just completed the Historic Landscape and Archaeological Survey for Snowshill and Littleworth Wood. Her research has put the manor house and gardens in context using historic maps, earthwork remains and air photographic evidence.

It was getting late..we had tarried and still had miles to go before Stanton …which lay over the ridge. Up through Littleworth with its disused limestone quarries, using an ancient trackway terraced into the hillslope. Sadly, the bluebells were almost gone but the white flowered wild garlic filled the wood with its strong scent.

And then the walk down towards an idyllic, quiet Cotswold stone village. Time to contemplate whether the sore feet would make it all the way to Bath and whether some practice before starting out would have been a good idea.

Our hostess sat outside in the garden with a chilled glass of wine. ‘Oh, you’re carrying your packs, I wondered why they hadn’t turned up’.

Our companions from Iowa had arrived long before us.