Last week I looked out and back from Hardy Monument ..in consideration of someone pivotal… now gone.

Hardy’s is high up. The highest point of the vast Bronze Age cemetery of the South Dorset Ridgeway.

Looking distantly down onto a field… now, with dogs gathering sheep… but then, where my caravan was.

A September Sunday afternoon. After the excavation…. ordering the artefacts.

I was leftover. The vibrant dig community gone. A row of bleached grass rectangles. Just the finds supervisor’s tent against the Loscombe Copse.. two fields away.. and the HQ caravan, a little out of sight, beside the barrow …and the lone tree.

HQ was full ..of vegetarian beans, pulses and CND posters ‘do not walk gently…..’ With the blackberries and hazelnuts.. enough to keep me for a while.

From my window, rural Dorset, and just the tinny sound of Terry Wogan leaking from a battered transistor. All that it could manage.

On the table, a plastic bag containing one of the cremations from the barrow.

Each had a gift for the dead. One had a bronze dagger, another a stone archer’s wrist guard. But what of this one? The director had asked me to separate the bone from the charcoal.

That was my job.. on an isolated peaceful Sunday afternoon.

Soon, my survey contract would begin… me and my bicycle, visiting, measuring, researching every Ridgeway barrow… but the winter-let flat and marriage were still 2 weeks away.

So… place the contents carefully on the table and gradually separate the black from the grey-white while listening to the hits of 82.

As the hours passed…the necklace emerged.

The National Trust archaeologists have been to Sutton Hoo. Angus showed us the new visitor access route. How to evoke the wonder of the place from a few low mounds.. ringed with modern distractions? To reveal the very roots of the English…in a nice way. 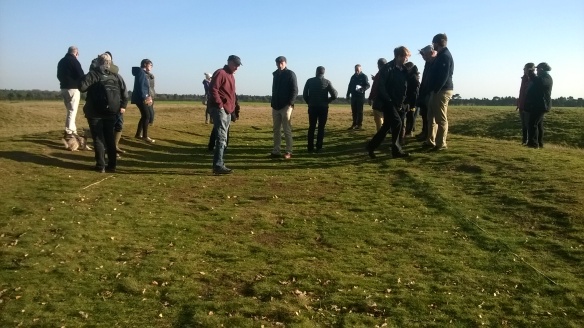 What a story ! Local skilled archaeologist Basil Brown asked to excavate a mound…. on the utter brink of WWII. Britain’s Tutankhamun, emerging as the tempest clouds of war gathered. A sand long boat. The decayed planks carefully revealed as a beautiful and curving ridged mould, spaced with clinker nails. That long last peaceful summer…it never rained.

Amazing gifts for a king, gathered in Suffolk from across the known world. The find so great that Brown is edged out by the posh academics from the BM. A poignant photo in the cafe as he respectfully watches the experts at work.

We gather in the wood above the riverside. We imagine the 7th century long boat dragged to its final resting place. Was this Raedwald, Bretwalda, king of the Anglo-Saxon kings? His people gathered around him and the gifts and treasure bestowed in honour of his greatness. Memories and stories. The holy men guided the congregation from life to death and a life beyond his passing.

I stand at the stone tower and look back to the caravan… and beside me a large Bronze Age barrow. The highest of the 600 or so scattered along the ridge between Dorchester and Weymouth…from Abbotsbury to Poxwell. 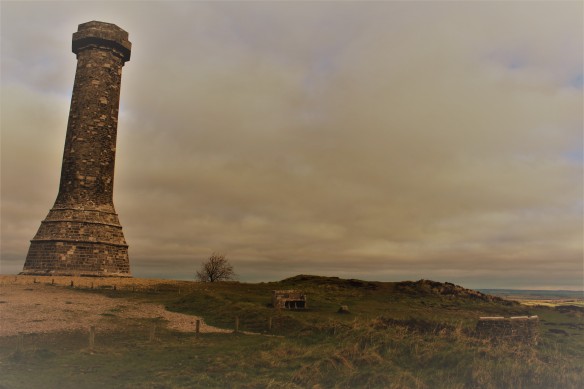 The plundered burial mound beside the Hardy Monument.

Presumably, the tomb of one the greatest Dorset barrow men but truncated and burrowed into long ago. Its contents taken without record. like so many of the barrows at Sutton Hoo… except Mr Brown’s wonderful discovery…

and mine in 1982…the amber and shale.. hidden but then emerging from the charcoal. Lozenges and cones, with holes drilled for the long rotted thread.

As the sun passed to late afternoon, his mini-van bumps across the field to meet me. I wait to show him.

Years before, the newly graduated Weymouth students had followed him to the shores of Poole Harbour and spent the summer easing a Roman pottery workers’ settlement from the stubble. We got food poisoning…the motorbike got a flat. His back gave out… but we tenderly carried him on the finds table to the trench edge. A battle stretcher but with cheesecloth and loons.

On a road to Emmaus, at his requiem mass, we gathered to honour him and remembered.

‘There’s a slow, slow train comin’ up around the bend’

5 thoughts on “Views From Hardy’s Monument”