This is our local National Trust mansion. A Neo-Grecian country house built in 1816. Just 20 minutes up the road from the office at Tisbury, Wiltshire. Set within a tree-studded park, a good place to walk at lunch time as the seasons turn.

Philipp’s House set on a south facing slope with the chalk escarpment behind. In the trees at the top of the hill to the left is the Iron Age hillfort Wick Ball Camp. The NT only owns the southern edge of its rampart which is the property boundary. The line of the ha-ha wall and ditch can just be seen as a grey line across the centre of the photo. The whole point of a ha-ha was to create a boundary that kept the stock out of the garden but remained hidden from view and preserve the landscape aesthetic.

It was built to the design of the fashionable architect Jefry Wyatville for the owner William Wyndham. Presumably because he was a little tired of his old fashioned 17th century pile and had some cash to splash.

It was known as Dinton House then because the house and park lie beside the village of Dinton but, in 1916, it was bought from the Wyndham family by Bertram Philipps and he renamed the place after himself.

He gave it to the National Trust in 1943, making sure that it was leased to the YWCA.. and for the next 50 years it was.

The fine sweeping lines of the Wyatville Neo-Grecian staircase in the hall at Philipps House. Flagstones being lifted.

It became empty in 1993, which was the first time I went there during its refurbishment. I watched a service trench being dug across the park. Nothing much came up, just a couple of prehistoric flints and a sherd of medieval pottery.

The present house is lovely and made of finely dressed local Chilmark stone.. but what happened to the old one?

There is a mid 18th century map that shows an avenue of trees leading to the old place, and this seemed to indicate that it lay further west.

Later in the 90s ..I marked the area out with grids and with the help of Simon and Mike, the countryside rangers, did a resistivity survey where I thought the old house might be. A beautiful spring day with the foliage of the copper beech resplendent around us  …but no luck, the computer plot showed the data as random patches of dark and light. More geological than archaeological.

Then they cleared out the sunken ha-ha ditch that fronts the house and took away the revetment stones before rebuilding them. Behind the ha-ha wall, in the buried soil, deep down below the front lawn..was building debris including 17th and 18th century brick.

Then..later.. in the library below the decoration .. reused limewashed bricks there… Tends to be the case that if you are taking down a house to build a new one it would be a shame to waste the old stuff.  You can hide it in the new structure without affecting the shiny modern glow of the new residence. 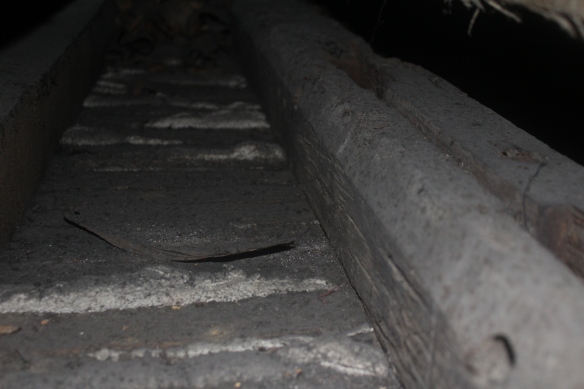 Below the floorboards of the 1690s Dyrham, a reused Tudor timber presumably salvaged from the old place. One of many hidden in the present house. Here you can see the cut chamfered upper edge of a sill beam two mortise holes to hold posts once fixed by pegs driven into holes drilled into the sides of the mortise sockets and along the top a grove into which the planks were placed between the posts.. to create a division between two rooms,  once part of the old Dyrham House.

Look below the floorboards of Dyrham House near Bath and there’s all sorts of old wood there. Bits of Tudor chamfered joists and beams and last time I looked in January, part of a plank and muntin screen re-used as a girder.

So always worth grabbing new opportunities to see beneath the skin of a place.

A few weeks ago, Emma told us that some of the entrance hall flagstones needed re-setting as they were getting uneven.. so we went over and saw what lay beneath.

Some had been lifted more recently than others and several were sand on top of soil but, at the foot of the great staircase we found stone and brick beneath the paving…beneath the sand.. remains of a wall.

The buried limestone blocks and flanked by brick walls in front of the staircase. Evidence of an earlier structure here.

At first we thought it might be part of the cellar structure but the plans show that the cellars don’t come this far.

Perhaps the old house lies beneath the new, perhaps parts of it were built on the old footings… Then Meg texted me a map dated 1800 she had discovered on the web site of the National Library. Much more accurate than the 18th century one and…. there is the old house just where the 1816 house would be built.

Problem solved. Now we need to find out more about the designed landscape around the mansion.

This new 1800 map shows some interesting details. The park is much bigger now than it was then and there are avenues leading to a structure on a hill beside the house…

The view out into the designed park. The ornamental lake lies top left in this picture. Again, on this photo the ha-ha line is only visible as the tops of fence posts across the centre of the picture.

One of the nice things about being an archaeological curator for the National Trust is to work long-term with staff, volunteers and other researchers to gradually unravel the stories of a place .. because..as we all know.. beyond the scope of history there is only archaeology.