To make sense of this you will need to read the first post which describes how a grand 18th century house designed by a famous architect was never completed. This is on the Killerton Estate near Exeter, Devon where the mansion house is…well.. it’s a little disappointing.

The many thousands of acres both at Killerton and on the Holnicote Estate in west Somerset were given to the National Trust in the 1940s by the Acland family.

It’s been 18 months since the first discoveries and things have moved on.

Killerton House with its roof covered in scaffolding. There is limited access for visitors while the repairs are taking place. The roof archaeology is being recorded and fragments of 19th-century wall paper and early 20th century photos of the Acland family have been found amongst the rafters.

The present Killerton House is having its roof repaired and the 1776 house has been cleared of undergrowth.

We wondered whether the LiDAR survey had see the cellars of the abandoned house under the trees of Columbjohn wood. Now that we can see ground beneath the vegetation there are heaps of bricks everywhere.

The workers charged with salvaging the building materials had left the broken bricks behind. 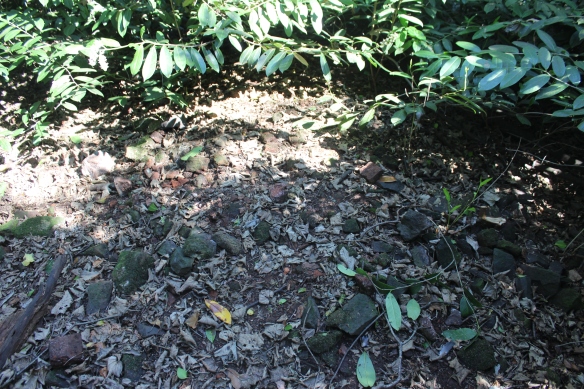 The scrub has been cleared in what we think was the main cellar of the 1776 house and the remains of its demolition and salvage have been found:  lots of broken bricks scattered in piles in the hollow.

Project manager Fi has co-ordinated a series of events which will enable visitors to explore Killerton’s historic landscape. This will happen during the CBA Archaeology Festival later this month. A team of National Trust Heritage Archaeology Rangers have been trained and Bryn from South West Archaeology is supervising the investigation of the lost house of Killerton .

A couple of weeks ago they mapped the earthworks and these fit with the architect’s plans for great house. At the end of July, they will dig some evaluation trenches to ‘ground-truth’ the remains.

Visitors will be very welcome and the mock-up of an 18th century doorway has been erected amongst trees as an entrance to the excavations. 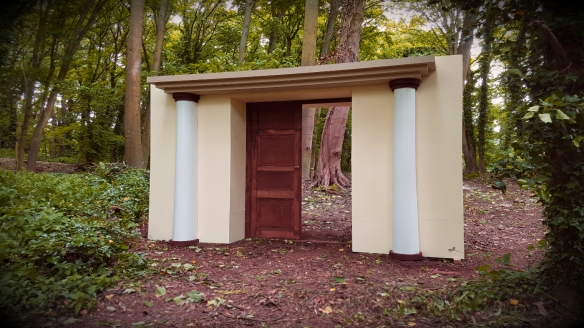 The newly erected doorway based on the original architect’s drawings of the house that never was. Visit and pass through the doorway to see the excavations in a couple of weeks….

I will spend a couple of days at the folly on the hill-top working out what remains of the ‘white tower’. This folly is shown on an 18th century painting . At this stage we don’t understand quite what the building looked like. It had been demolished long before any photos had been taken. 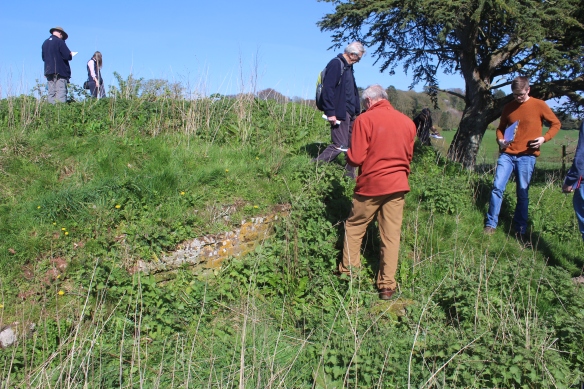 The new National Trust HART ranger team for Killerton. Practicing making condition monitoring records of the 18th-century folly site on the conical hill top across the valley from Wyatt’s lost house. We will take off the turf on July 27th and see what lies beneath.