Before I go any further, I wanted to check whether you know who Sir Richard Colt Hoare was? Here’s a couple of clues via famous quotes. 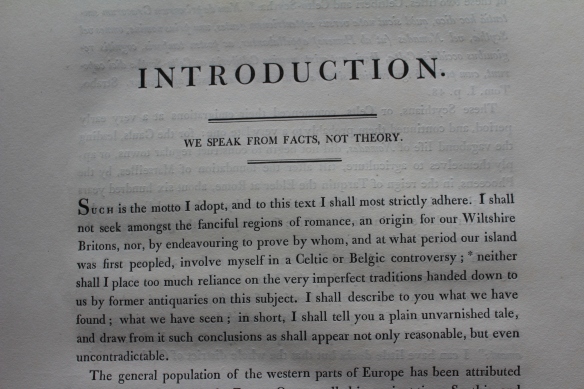 ‘How Grand, How Wonderful, How Incomprehensible’…no change there then.

Between 1810 and 1821 Sir Richard wrote and published ‘Ancient Wiltshire’, the first detailed survey and description of the county’s archaeology. This is an internationally important publication because it forms a key stepping stone in the development of archaeology as a science.

Some time ago I was asked to give a talk on Sir Richard. The talk was to be part of a conference …organised by the Cranborne Chase Area of Outstanding Natural Beauty team.

Sir Richard owned Stourhead between 1785-1838 and in 1944, the Hoare family kindly gave his home to the National Trust.

Exciting! As the National Trust’s archaeologist responsible for Stourhead, I seemed the obvious choice to give the talk. There was a problem however… just a small one. I’d never taken the time to find out much about him.

One of those things which could be dealt with in due course.

But as May approached and the allotted Saturday loomed…correcting my ignorance became urgent. Time to walk into the Tisbury NT library to see what books had drifted onto the shelves over the decades.

One was a half finished manuscript about Sir Richard’s life and another was a transcript of his Stourhead Annals…. 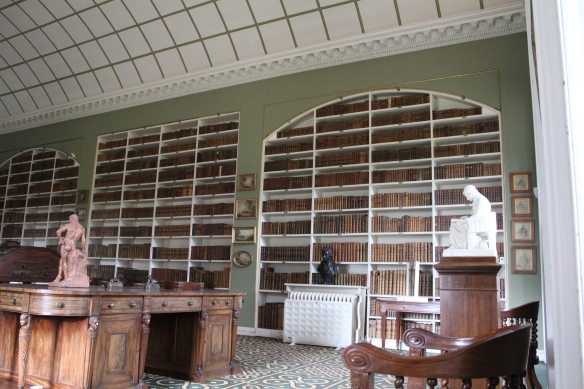 The white seated statue of Sir Richard in the library he built at Stourhead.

Sir Richard Colt Hoare always wanted to grasp and record time and when his grandfather gave him Stourhead he realised that he did not have a record of the history of its development…so he started a book he named ‘The Annals’, making sure that any changes to the Estate were recorded each year. Writing in 1792, he appealed to future owners to maintain his Stourhead record. On the front cover he wrote.. I have begun this record and those who follow ‘do thou likewise!’.

The next thing in my education was to drive up the road from Warminster to Heytesbury. 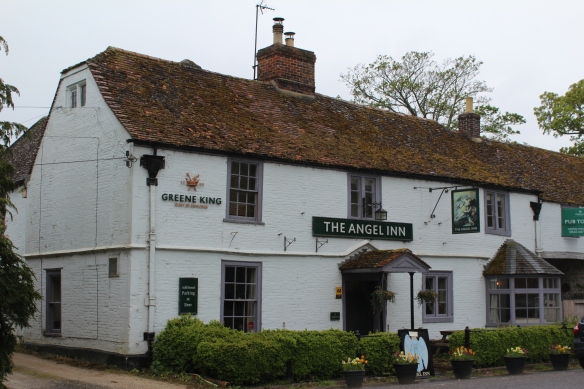 Where William Cunnington planned his excavations with his digging team John and Stephen Parker.

Here….once lived a wool merchant named William Cunnington. Sir Richard wrote that William’s doctor was concerned for his health and advised him to ride out into the landscape and breath in the Wiltshire air.

And so he did. William decided to study and excavate the strange ancient humps and bumps that covered the chalk downs surrounding the village.

I drove to Heytesbury’s Angel pub. This was where William met his digging team John and Samuel Parker and together they planned their investigations. Between 1798 and 1810, they dug well over 300 burial mounds together.

I then looked for his house beside Heytesbury Park. He met Laetitia, the lady of the manor , who introduced him to her brother Henry Wyndham of Salisbury who agreed to fund his researches. William and Laetitia’s monuments are in Heytesbury church.

His next sponsor was Rev Cox, who was rector of Stourton church and through him, in 1801, he met Sir Richard Colt Hoare. They were a similar age, Richard 4 years younger, and they got on well. Soon they were working together to try to understand the ancient evidence of past lives visible within the countryside that surrounded them. 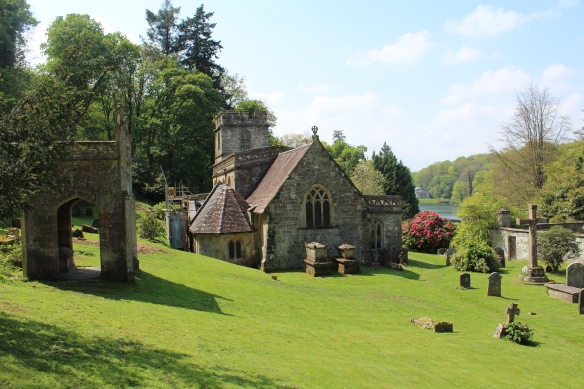 Stourton Church and Sir Richard’s memorial (left) and in the distance the Stourhead lake and Pantheon in the background.

Time to walk to Stourhead House where I had an appointment with ‘Ancient Wiltshire’. The reception hall is overlooked by a large portrait of Sir Richard with his young son Henry. The artist, Samuel Woodforde, thought that he seemed shy on first meeting but was considerate and loyal to his friends and acquaintances.

Down a corridor to Sir Richard’s library…little changed since he worked there, writing about his archaeological research… and I was shown into a side room with a view to the obelisk and park.

The first volume, South Wiltshire was kindly brought to me and opened. 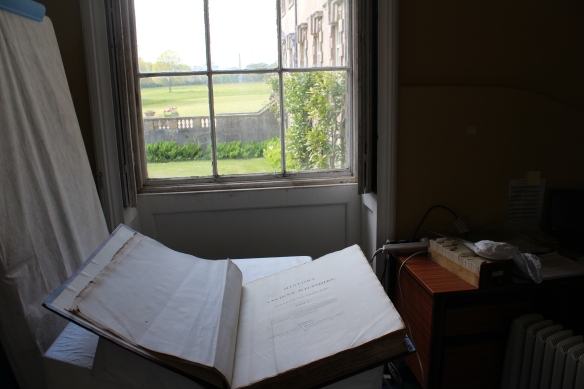 ‘Ancient Wiltshire’ was begun in 1810 but this was too late for his friend William Cunnington who had died a few months earlier. Richard laments the loss of his friend and fellow time traveller. The introduction and the conclusion to volume two ‘North Wiltshire’, written in 1821, states clearly these volumes would never have been possible without William’s inspiration. It is his friend’s portrait on volume I and his own on volume II. 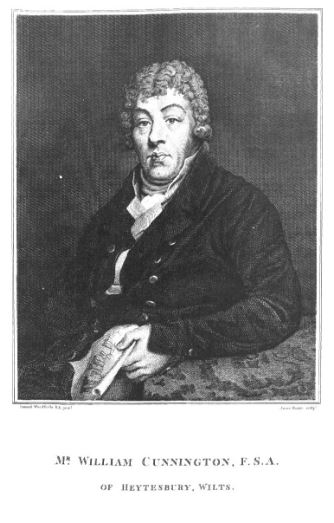 As I turned the pages in that little room…written just a few feet from where I stood… the fine  illustrations particularly amazed me.  At the bottom left of each .. was the name P. Crocker. 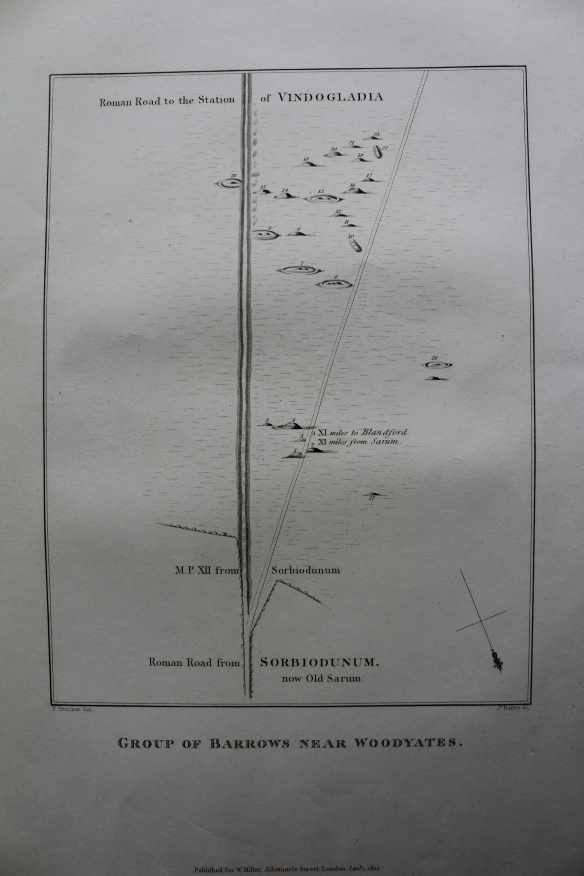 Crocker’s plan of the Oakley Down barrow group. Number 9 is where they sheltered from the storm (read on)

He was the other key individual in the archaeology team. Philip learnt his mapping skills from the newly formed Ordnance Survey. Was it William or Richard who first engaged  him to make plans of the archaeological sites they were discovering?

Philip mapped and numbered groups of burial mounds and marked the routes of Roman Roads. His art included landscape paintings, reconstruction drawings of monuments, most notably his drawings of Stonehenge and Avebury, and he also drew the artefacts discovered during the barrow excavations. 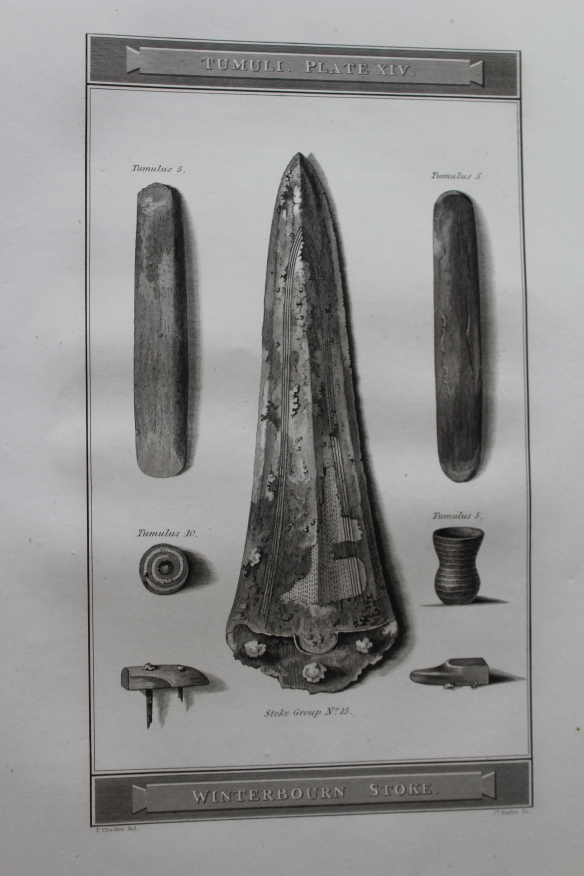 Bottom right of each drawing is the name J. Basire. James engraved each of Crocker’s illustrations to enable them to be printed using the newly invented lithographic process.

‘Ancient Wiltshire’ grapples with the problem of understanding the chronology of British prehistory at a time when there were no dating techniques. William and Richard noted the way roads and earthworks altered their course or cut or avoided one another demonstrating a sequence of events. They noted different types of finds and that burials with iron were always found above burials with bronze.. though they did not coin the terms Iron Age and Bronze Age. The Danish archaeologist Thomsen did that in 1836.

There are discovery stories in ‘Ancient Wiltshire’. Colt Hoare aimed for scientific enquiry though this was the time of gothic romance. The excavation of the Bush Barrow in 1808 within the Normanton Group of barrows south of Stonehenge is of particular significance. Here, Cunnington and the Parkers recorded the golden, bronze and stone grave goods surrounding the burial of an important man but it is the account of another excavation which captures the mood of the time.

This excavation was just across the border in Dorset. Here, a large barrow group was drawn by Crocker cut across by the later Ackling Dyke Roman Road. Digging into the large mound ‘9’ (see illustration above) they found a burial near the surface but below this a heap of flints. Sir Richard rightly surmised that the primary inhumation lay deeper. They began to shift the rocks and a thunderstorm broke out across the exposed downland. Swept with intense rain, the team clustered for shelter in the burial pit leaving their iron tools on the mound summit above them. A clap of thunder and the tools drew a direct hit by a lightning bolt that sent a landslide of debris down upon them forcing them out into the storm. One of Sir Richard’s companions Rev William Bowles was so moved by the experience that he wrote a poem which is included in the book. It captures the romance of the time reminiscent of contemporary novels such as Jane Austen’s Northanger Abbey. 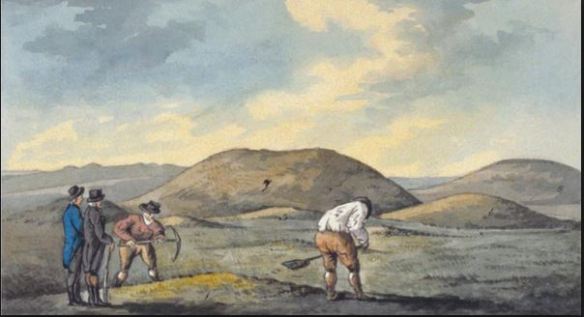 I closed the second book and walked out into the park and then back into the undecroft below Colt Hoare’s picture gallery on the north end of the house. It is empty now but was once the exhibition space for the finds from the excavations. The books and archive were sold in 1883 when the family was strapped for cash. Fortunately, Devizes Museum stepped in and saved Cunnington and Colt Hoare’s collection and you should go there to see what they discovered.

After ‘Ancient Wiltshire’ Sir Richard began ‘Modern Wiltshire’ he knew that he did not have enough time left to finish it and so relied on friends and colleagues to achieve that. 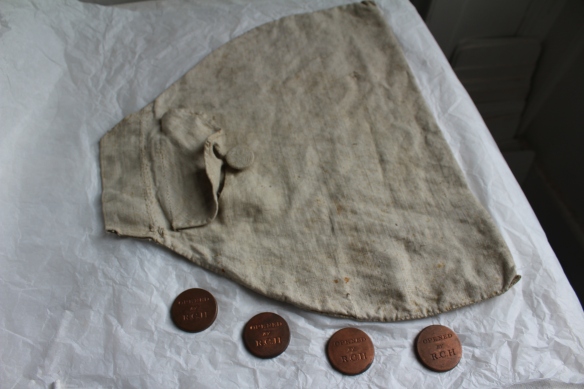 The coins struck with Richard Colt Hoare’s initials on, placed in excavations before backfilling to show to future diggers that he had been there and the canvas back he carried them in.

I’ll finish by turning back to Sir Richard’s ‘Annals. There are fewer entries during the 1830s and in 1838 ‘at a quarter past six of the morning on the 19th of May at Stourhead died Sir Richard Colt Hoare’

His loyalty to his team is perhaps reflected in an entry two years later…On the 24th April died Mr Philip Crocker, for 30 years Land Steward for the property.

I had enough information for the talk but so much more to discover.