Last week we tested the evidence for a lost Roman villa.

It lies in a hidden, rarely visited field… full of earthworks and stones poking through the grass.

Starting the excavation: we resurveyed the site with a resistivity meter (bottom left). Cutting the turf  at the lower end  (right) where a corridor? (continuing beyond the two groups of figures on the left side of the tree) gave access to rooms. Terraces at the upper end (left), a series of rooms beside the corridor?

On Monday, with the Volkswagon Golf bulging with tools, the farmer directed me across the farm.. through rough terrain and rutted gateways.

I needed to avoid the more direct route because it was full of new lambs with their mums.

Rob shook his head. ‘Are you sure you want to risk your car out there….We could transfer the equipment into a 4×4’.

‘No, that’s fine’ I said confidently ‘Coaxing inappropriate cars through rough terrain has become a mission. I once got a Vauxhall Nova up Golden Cap… well almost’.

Dodgy gates and a moonscape of deep ruts but the weather has been very dry so nothing untoward occurred during my outbound journey ..and I entered the field which was full of  wonderfully intriguing humps and bumps.

So this was exciting.

Stones and walls jutted from terraces and banks. We were on the edge of the Roman city of Bath and this place had a fabulous view out over the Bathampton valley. A spring gurgled in a cutting a few metres downslope. This had every chance of  becoming a previously unrecognised Roman villa.

A home for one of the wealthy people associated with the sacred temple complex surrounding Bath’s magical hot springs.

The NT Bath Skyline team had set up their shepherd’s hut tea room with all the facilities. Luxury. Staff and volunteers were ready to become archaeologists. We all were.

The evidence for the villa seemed good, perhaps too good. Where were the shaped blocks of stone reused in the boundary walls….There were reports of Roman pottery in neighbouring fields but nothing of that date from this particular field. But it was all grass and without mole hills..how would it make itself known.

I introduced the site. Inspired by what we might find. Stories of collapsed walls, partly robbed in medieval times before the site was forgotten. Under this a fallen roof..a sea of tiles (limestone or clay). Then below this mortar and a layer of highly decorated painted plaster (which must be very carefully planned and lifted). Now perhaps we would find small rodent bones (owl pellets dropped when the grand villa had been abandoned, the birds flying in at night through broken windows to roost in the decaying rafters. Below this, of course, a splendid mosaic or mosaics. One must hope that they had not collapsed into the under floor heating system…classical scenes finely worked in cubes of stone and tile. 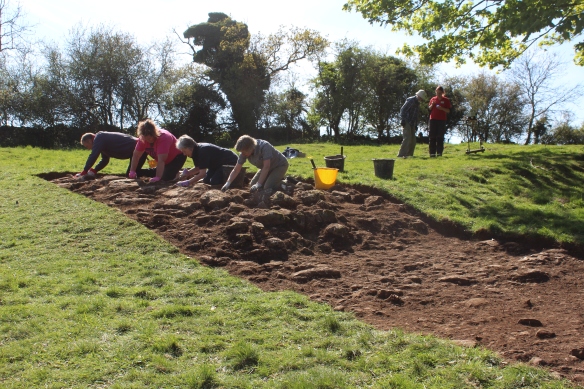 Cleaning back the site following the removal of turf defining the corridor? and room? levels.

A trench was marked out to cross what appeared to be a corridor and a large room. The turf was peeled back. The team formed a line and we trowelled and uncovered the stonework.

At this point we expected fragments of baked clay, much mortar and blocks of cut stone, a scatter of oyster shell and animal bone and lots of Roman pottery….

We found a couple of pieces of 19th century glass and a nail.

The stonework was a heap of  unworked chunks of local limestone piled up to form a terrace.

The next day, I walked back towards the field edge to check out the fragments of wall we could just see sticking out of the grass. These were proper two sided stone walls.

Dave cut a trench across one section and I hacked into a hawthorn bush and made a space to investigate the footings of another wall heading under the 18th century field boundary wall,

Dave found .22  cartridge cases and  I found fragments of a white ware jar. The 1902 OS map showed a Boer War army camp in the next door field. Perhaps they’d chucked their rubbish over the wall (just like the army tipped their broken crockery over Durrington Walls during WWI). 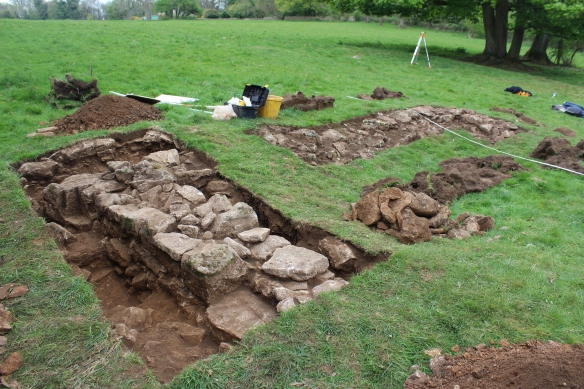 The mortared stone walls of the building looking back towards our first trench, the trees marking the corridor that turned into a trackway and in the middle distance the rooms that turned into stone faced field lynchets for small ‘celtic’ prehistoric? fields. Top left of the wall in the foreground is a massive stone that formed the door jamb. This was cut into to fit the timber door frame and a level horizontal area had a hole drilled for the door pivot. The wall continues to the right and the width of one of the rooms of the building is seen as it turns (top right) to run parallel with the wall in the foreground.

All still modern and not a fragment of anything Roman in sight, we strung out tapes from both walls and where they coincided we opened another trench to find the corner of the building.

The big trench was abandoned. Carol had found a bone fragment and a tiny piece of Roman grey ware (“that’s not really enough is it”). We concluded that our earthworks were part of a prehistoric field system, terraces levelled into a slope and faced with limestone rubble with a track defining their lower edge. 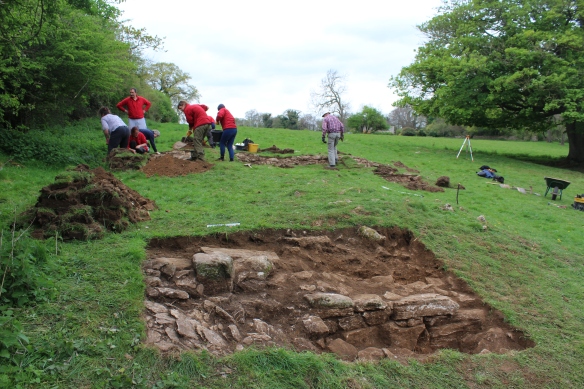 Looking back towards the walls in the last photo. Top left of this trench had a flagstone in place, the key and the pitchfork were found here.

The team on the new trench found a flagstone on a mortar surface, a square section nail, an impressive looking pitchfork and a door key. The surface modern pottery gave way to fragments of tobacco pipe. In Dave and Fay’s trench we found a doorway with a pivot hole in it.

The pitchfork and square sectioned hand made nail from trench C,

The maps show nothing here in the last 150 years. There are less detailed 18th century maps which also show a blank.

This field was enclosed from the Bishop of Bath’s deer park, in use from the 12th century. It does not seem to have been ploughed since then..but these mortared stone walls and finds are not as old as that… A cottage and/or outhouse in use from late 17th to early 19th century? We need to look at the tithe map and do some more documentary research.

In the end, as we all worked together to backfill the trenches and replace the turf…we agreed that…although we lost our dream of rediscovering a lost Roman villa, it had been good to work there together…

amongst the sparking leaves and flowers in the cool April sunshine.