As Martin so eloquently puts it ‘the cliffs are leaking archaeology’ especially in West Dorset, with its soft geology and erosion by the sea. Luckily for us there are keen-eyed locals who walk the same routes and notice changes and strange objects laying on the beach or sticking out of a fresh landslip.

A few weeks ago I found a message on my desk to ring a Mr Bickford who had found what he was sure were parts of a quern stone used for grinding corn and some clay loom weights, near Seatown in West Dorset. I felt a little jolt of excitement, as regular readers of this blog will recognize Seatown as the place where we excavated a Bronze Age burnt mound and two Iron Age ovens. (see 20/07/2015 burnt mound the story so far). Could we have more evidence to fill out the story of the Iron Age at this site, or was this a new place to investigate further along the cliff?

I rang and arranged to pop over to Seatown and look at what he had found and record were they came from. So it was that I headed west on a bright and sunny morning, deep blue sky above and spirits high. I was not disappointed!

I met Humphrey in the car park and we walked up the hill to his house, round the corner and into the garden. What I saw took the last of the breath away that the climb up the hill had left me. On the garden table were three large pieces of quern, both upper and lower stones, and next to them what looked like one and a half very large triangular clay loom weights!

“Wow! Oh yes they are exactly what you thought they were”

The top and bottom stones together as used

The pieces of quern stone

The stone the quern is made from is not local to the immediate area. We have had a few geologists look at images and one suggestion is that it may be continental! But they need to see it in the flesh, so to speak, so they can see every mineral and inclusion.

The loom weights are very large and have more holes than necessary so may not be loom weights. If they were they would have been used on a warp weighted loom, to make cloth by keeping tension on the warp(fixed thread) 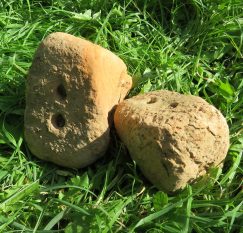 The loom weights? probably something else but what?

My hand gives a scale to the size of the weights

Both the quern and the possible loom weights are probably Iron Age and the small piece of pottery found with them looks very like the Iron Age pottery from the ovens found when excavating the ‘burnt mound’ site nearby.

A reconstruction of a warp weighted loom, the weights are along the bottom behind the lowest bar

Once again we are on the trail of more information about a site. Try to solve the mystery of the weights and it’s a trip to the geologist first to see if we can track down the origin of the quern stone, who knows what stories we can then tell about the people who lived at Seatown over two thousand years ago.