The last two were 12 hr days but late summer Chedworth at 7am is lovely.

Walking past the Victorian Lodge with tapes and drawing boards. Look right down the valley towards the new day. The mist still hiding the lower fields and hedgerows.. and around the excavations the spoil heaps steaming in the rising low sunlight, burning off last night’s showers.

Pull back the tarpaulins and capture the moment. Birdsong and video.

What information do we have now? What has been gathered from our two weeks of labour?

The disabled access ramp was dismantled to give us sight of the north end of the East Gallery. Our trench 4a.. which is really four adjacent trenches.

Carol completed the removal of turf from the SE corner of the great reception hall. The NE corner we saw in 2013 (good condition). The NW corner (rubbish condition) and the SW (brilliant) corner we uncovered in 2014. So Carol’s SE corner (60% survives) confirmed that the striped red and white mosaic design bordered the whole 18m long floor and that although it had been lost against the south revetment wall, this loss had revealed a narrower North Range wall line beneath the mosaic. 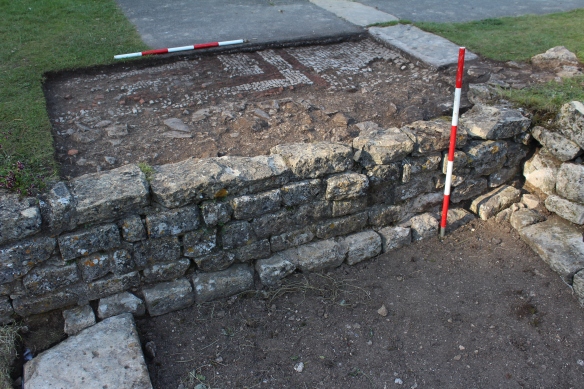 The mosaic forming the SE corner of the reception hall and the top right the door threshold into the north corridor. Below this is the wider revetment wall of the north range. No doorway visible from the East Gallery but the offset wall at the bottom of the ranging pole is probably where the Roman floor used to be. The flagstones on the left abut the revetment wall and this is a later wall forming the west side of the gallery. On the right is the broad buttress wall which may have infilled an earlier doorway. Our deep interesting trench is on the right side of this.

Down below, at the north end of the East Gallery, we came down onto clay below the 1906 and 1911 pennies. No Roman floor survived. The offset stone course probably marked where the floor once had been… but it was long gone.

There was no entrance evidence at the north end of the East Gallery into the North Range. In fact the creation of the corridor or gallery seemed a very late Roman after thought..certainly later than the wider North Range revetment wall. This wall’s foundation cut that of the revetment…but, from the archaeological evidence, the doorway through the wall used by the modern disabled access ramp seemed a real Roman feature.

Then there was the thick buttress built into the east gallery wall. The east gallery wall foundations go down and down and this proved to be an early Chedworth feature. The buttress matches the width of the doorway in the west wall and it was Bryn who suggested that the buttress filled an early doorway. A weak point that needed filling in.

It was the trench on the lower east side of the buttress which was interesting. Its near cousins to the west had been a little disappointing.. 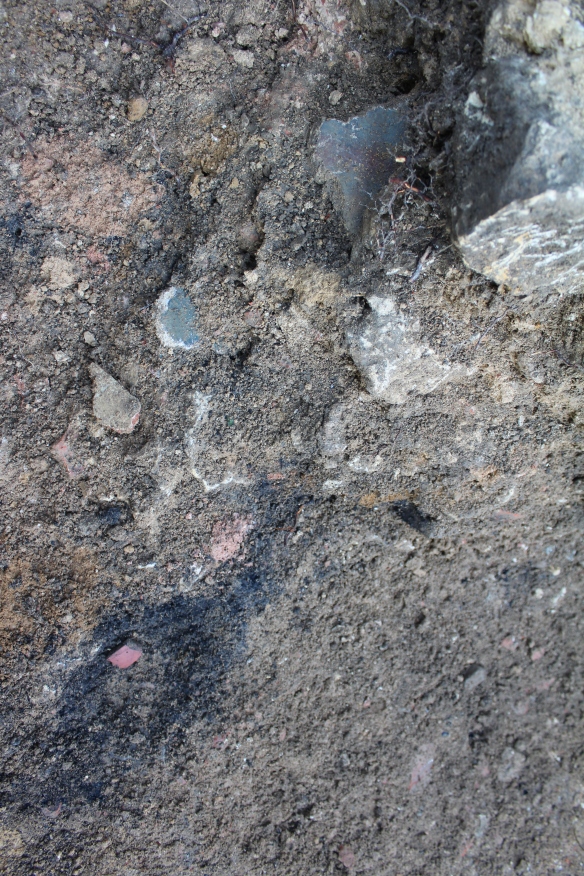 Samian in charcoal amongst mortar and painted plaster at the base of the buttress.

Once the modern upper soils had been removed, we hit the AD 295-305 coin and then the 3rd – 4th century mortaria rim and then the tiny late 3rd century coin. Eventually the rich dark soils turned rusty brown and then into an orange brown decayed mortar full of tile fragments and pieces of deep blue and red painted plaster. Against the revetment wall, this mortar ran under its lowest course and beneath a large square paviour of limestone wedged between the buttress and the wall.

On the last morning I cleaned back the mortar layer and found a seam of charcoal within it and a fresh square of samian pottery was flicked out by the trowel point. This boundary between the upper and lower Chedworth courtyard levels seems to have been established by the 2nd century?

Needs some more work next year.

Then there is Fay and Rob’s trench in Room 21. An extraordinary slice through time. A sealed 1600 year old heap of stuff (including a door key! as well as all the decorative plaster). The stacks of tile pilae protruding like broken teeth from the debis. They lie in ordered lines but survive at different levels. The idea that the blocked doorway from the east once led via steps up to the floor above the hypocaust… doesn’t seem to work based on the level of the pilae.

The two lines of pilae on the east side of room 21. The blocked door is top left. The burnt plaster lines the wall along the left side of the photo. A broken channel of box flue tiles was attached to this wall. Part of the later heating system.

The door seems already to have been redundant and blocked before the hypocaust was installed. Red plaster surviving on the door jamb and burnt plaster within the room at hypocaust level suggest a room at a lower level swept away for the new heating system which in turn was backfilled and sealed with a new Roman crushed brick floor later in the 4th century. The mid 4th century coins just below this floor help us with our dating.

The foundations of the east wall of this room lie on a good early Roman line linked to the plunge pool of the early Roman baths.It was abutted by the charcoal sample we took in 2014 giving us an early 2nd century date.

Trench 4c, on the west side of Room 20 showed us that Sir Ian Richmond’s suggestion that a flight of steps may have existed here leading down from the West Range into the colonnade of the North.. did not exist.. but we found evidence for a narrow access passage down into the boiler room for the early North Range steam heat baths.

Lastly…4d, Alex, Harry, Peter and Les heroically removing the claggy clay backfill of the 1962 water works at the Nymphaeum. The Nymphaeum being the stone shrine created in the 4th century in honour to the spirit of the water source, the reason Chedworth could be created here. 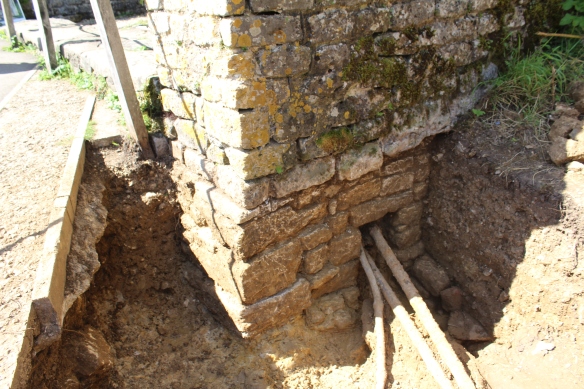 The pipes issuing from the Roman Nymphaeum culvert. Notice the Victorian change of build above Roman foorings at the grass level. The 1962 concrete wall on the left marks the line of a wall probably redundant and robbed out before the Nymphaeum was built.

The discovery of three water pipes..the 1860s lead pipe heading for the Lodge and the two 1960s iron pipes heading for the north range. They had been shoved into the original 4th century culvert.. which survived though slightly damaged. It was 0.3m wide and 0.6m high with a stone floor. I drew it and noticed that the proper Roman stonework was slightly offset and only survived beneath the turf line. Above..at least on the south-east side, was all a Victorian rebuild…

…and Sir Ian’s 1962 concrete interpretive wall, which continued the line of the North Range running into the threshold stones of the Nymphaeum, was built on almost a metre of 1962 made up ground. No Roman stone wall was found. A robber trench had been cut into the natural yellow clay and concluded that this wall had been taken away before the Nymphaeum was built.

Sue, the marble expert came to see us and believes that Chedworth’s marble is so rare for this country that it must have been used at a very special location within the villa. She believes that the octagonal basin at the centre of the Nymphaeum would be such a sacred place. Chedworth’s Nymphaeum cannot be compared closely with any known structure in Roman Britain. So perhaps a particularly sacred site..

Over for another year. Many thanks to everyone who has helped and supported the archaeological work at Chedworth during the last two weeks.