On Monday I had a meeting in Bristol but I really wanted to be in Sherborne Gloucestershire.

After several years of fieldwalking and geophysical survey, the time had arrived to test the ground and see if anything survived beneath the wheat stubble on Woeful Lake Farm. The survey plots showed rectilinear patterns across the fields, surely there were still building remains, enclosure ditches and other features…under the soil.

These fields had been ploughed for 100s of years and this vital process of producing food had gradually dug into, turned and jumbled the ground many, many times.. eroding away the archaeology.

Ann, Tony and other members Gloucestershire Archaeology had put in three small trenches over the weekend and they needed to be backfilled to enable the farmer to plant his next crop.

So, when the Bristol meeting was over,  I scooted up the M5 and across the Cotswolds via Crickley Hill and reached the field… to see everyone poised with shovels and spades. The ring of tea break chairs and a survey tripod silhouetted against the skyline…

The excavation trenches on the skyline poised to be backfilled.

but I had arrived in time, the piles of spoil still stood beside the trenches and I was able to see what had been found.

One trench had come down onto an 0.8m wide limestone wall. The geophysical survey plot indicated that it should turn a corner in the next small trench but there was only the rubble foundation surviving there. The wall courses had been ploughed away. 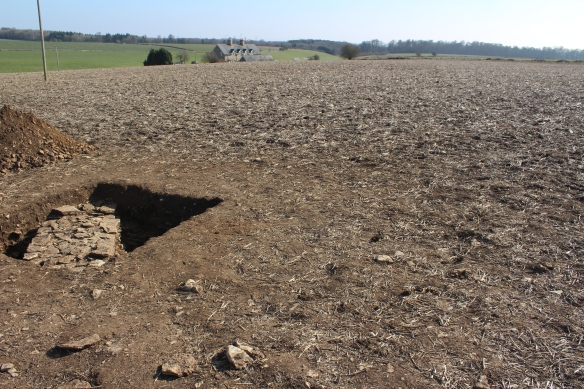 The best finds came from the trench about 15m further across the field. Here, a mint condition silver coin had been found. It lay where it had been dropped 1700 years ago on the surface of a rough limestone floor. 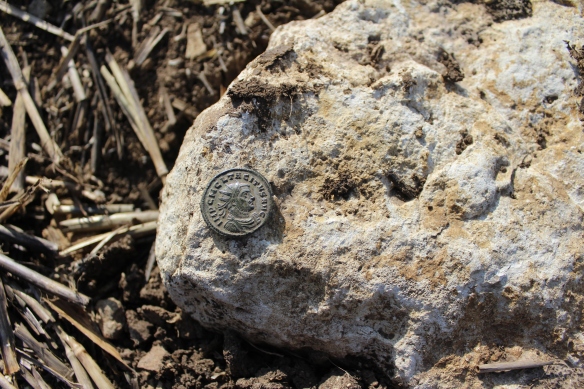 The name Tacitus could still be read around the head of the Emperor with his typical 3rd century spiky crown (barbarate radiate).

Later, I looked him up. He wasn’t a bad emperor and seemed to be sorting things out but only reigned 200 days. The jury is out, one source states that he died of a fever but he may well have been assassinated. These were unsettled times.

A pit had been cut through the limestone floor and within the dark soil filling was found a bronze brooch. This one was in very good condition and still had the pin to enable you to hold your cloak in place.

Ann’s brooch from the pit. Bit of a clean up and it’s almost good enough to wear.

The pottery and other finds from the trenches showed that people had been living here from the 2nd-4th century.

I took some photos and thanked everyone for holding back until I could see their discoveries. Further deep ploughing would quickly damage the shallow buried remains but minimum tillage saves on agricultural fuel and preserves archaeology below the old ploughsoil depth.

These are just small window trenches. Perhaps we will return next year to see more of this Roman settlement at the head of a small valley just a few miles from Chedworth Roman Villa. There are many more acres to cover with geophysical survey before we have an idea of the extent of this place.

I wonder how many people lived here and what place name they had for their home.

The earthwork remains of the Roman amphitheatre at Corinium Dubunnorum, a few miles down the Fosse Way from Sherborne. The tiers of wooden seats surrounding the floor of the auditorium have long gone .. as have the cheering and jeering local crowds who once watched the entertainment.

The Cotswolds had a high population in the Roman period. Their main town would have been Corinium, the second largest place in Roman Britain. We call it Cirencester today…I drove through the town on the way home and stopped off to look at the abandoned  earthworks of its amphitheatre.

Perhaps the owner of the newly rediscovered brooch once visited here to see a show….

2 thoughts on “Sherborne’s Romans: Under the Stubble”