Hardy’s Monument occupies the highest and central part of the South Dorset Ridgeway. The National Trust has looked after it since 1900. You might think that it was built as a memorial to Thomas Hardy and you would be right.. but not the writer. In 1844, the monument was built by public subscription to honour Vice-Admiral Thomas Masterman Hardy who attended Lord Nelson after he was mortally wounded at the Battle of Trafalgar.

The Monument was built on land owned by Admiral Hardy’s family. They valued him as part of their kinship group, a Dorset celebrity, a heroic leader. His stone tower monument was something they were proud to look up to as they worked and managed their estate. An apt continuation of a Ridgeway tradition stretching back thousands of years.

Until recently, the National Trust only looked after the Monument and a few metres of land around it. However, the density of barrows along the Ridgeway meant that even in this small parcel of ground the Trust cared for a burial mound and a half. We have the other half now.

Just a few weeks ago, the land around the monument was purchased, an area of heather and rough pasture with amazing panoramic views, particularly southwards towards the English Channel. From here Weymouth, the Isle of Portland, Chesil beach and the Fleet can be seen. NT has several more barrows now. However, it was too late to save one of them.

The gravel quarry marking the site of the lost bell barrow.

Just a few metres to the south of Hardy’s monument there was once a massive barrow, over 35m in diameter and 3m high. A key location chosen at the centre and highest point of the vast Neolithic and Bronze Age cemetery of the South Dorset Ridgeway. Here, there are the sites of over 600 burial mounds between the parishes of Poxwell and Abbotsbury.. but this one is gone now. After 4000 years it was bulldozed in 1955.

The National Trust was too late to save it but we are fortunate because in May 1955 two government archaeologists saw that it was under threat from quarrying and decided to preserve its memory by excavation.

In this area, the chalk ridge is covered by sand and gravel. After the archaeologists had cut a section across the mound and ditch, they considered that when first built it must have looked like Saturn when viewed from a distance. A circular ring ditch cut into the bright orange gravel, surrounding a raised platform or ‘berm’ and at its centre a high burial mound of cut turves. A ‘fancy’ barrow attributed to the ‘Wessex Culture’

The place had been a focus for activity ever since. They wrote in their report that the top of the mound had been dug into during WWII and a gun emplacement had been placed there and on the north side closest to Hardy’s Monument they found another cutting and a brick fireplace built against the barrow. They thought this had been a sheltered place for the 1840s workmen when they built their famous Admiral’s tower.

But who was the Bronze Age celebrity the barrow was constructed for? The mound had been built using acidic soil and therefore no bones survived, no grave goods either so perhaps the centre had been robbed out in later generations.

However, a few hundred years later, three other people’s cremated remains were put inside large crude barrel shaped urns. They were decorated with the makers’ finger tip and nail impressions and each was placed around the outer edge of the mound. 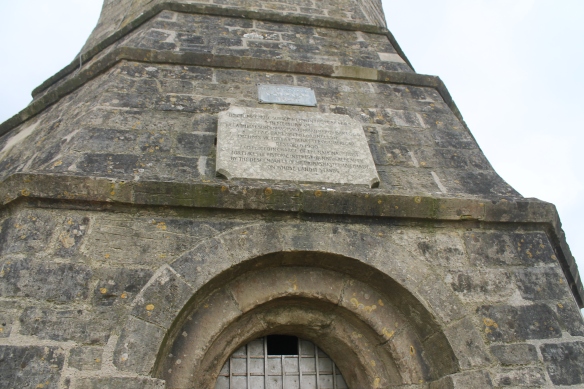 The inscription over the north facing doorway into Hardy’s Monument.

The heathy soil preserved the ancient pollen and the report lists all the Bronze Age plants living in the area when the mound was first raised.

It is gone now..the site is just a gravel pit on the edge of a car park..

but thanks to archaeologists Paul Ashbee and M.W. Thompson we can still tell some of its stories. No doubt the mound helped shape many lives, things that we can only imagine.

For a moment pause:-
Just here it was;
And through the thin thorn hedge, by the rays of the moon
I can see the tree in the field, and beside it the mound-
Now sheeted with snow – whereon we sat that June
When it was green and round
And she crazed my mind by what she so coolly told-

Thomas Hardy (the other one)