I found these letters a couple of weeks ago in brown paper envelopes hidden within the archive of the Oxford professor and Roman era specialist Sir Ian Richmond. The Richmond archive is in the Sackler Library, Oxford.

The letters are from Eve Rutter who was engaged by the National Trust on advice from the Ashmolean Museum to begin excavations at Chedworth Roman Villa after a research gap of 20 years. Her work was good but she was rather brushed aside by Sir Ian …who took over and carried on working at Chedworth for another 10 years .

The newly qualified graduate Eve Rutter began modern excavation at Chedworth 60 years ago.. spending the late summer of 1954 at the villa before starting her new job at the Guildhall Museum London working with a team to record the archaeology of WWII bomb damaged London as it was being redeveloped.

I give you the story in the letters copied below

This is about the proposed excavation at Chedworth..I am unable to do it myself at that time of year so we have the services of Miss Eve Rutter who has just taken her final exams here and has already been on many excavations including one she has directed herself so I think she will do it very well. Would you and Mrs Irvine be able to put Miss Rutter up during the excavation as she has no means of transport…. 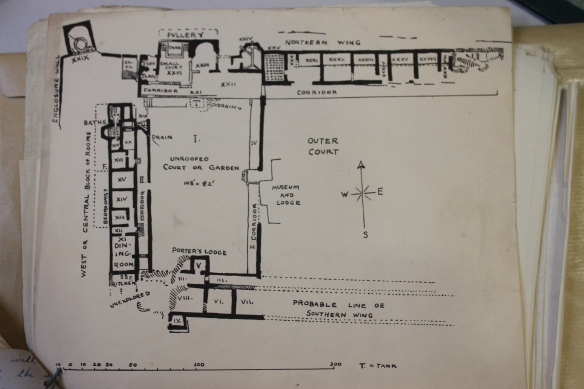 Plan of Chedworth before Eve Rutter’s excavation. The ‘Porter’s Lodge is the small room (IX) bottom left on the plan protruding south of the south range.

After getting your letter, I had a chat with Irvine who thinks that two men for a week might be enough..After having Lord Vestey’s men for a week after harvest we may have to pay for additional help… I hope you feel you can go ahead. Of course if the dig reveals some wonderful finds you may be tempted to go slow and then the labour problem will grow more serious…

Herewith the plan of the excavation at Chedworth: any suggestion as to what the well drained room is will be welcome…. 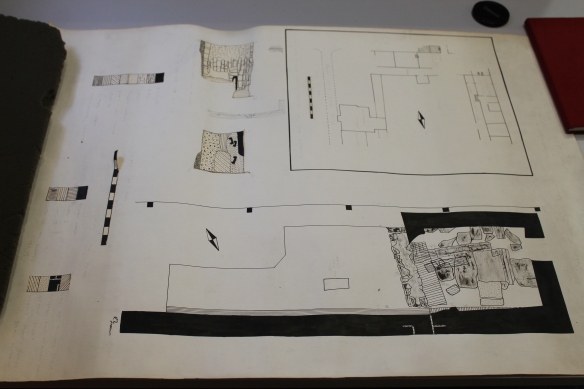 Plan and sections drawn by Eve Rutter of the 1954 excavation

Could this have been a scullery – old farms do have similar drains in their sculleries although not such a complicated trip up pattern!

I hope you have found all the things returned alright. Mr Ovenall was on duty when I came in on the Sunday. I don’t know whether Joan has returned: I thought she said she would be away a week but the Museum said two?

The glass fragments, mainly from one vessel I think, although few seem to fit, came from the first trench and were associated with a Rhenish thumb indented jar. Is any result yet available on the bracelet?

..the NT has asked for a report and plan to be available for the annual general meeting on 12 Oct to liven up the members and if I could have a photograph or two to include, the dig might look a little better – the Mithraeum is setting a high standard of what the public expect!

I go to the Guildhall on Friday. The Mithraeum is very interesting although I can’t help feeling that many of the thousands must have been disappointed at the rather wet stonework. Life there is very hectic consisting chiefly in an attempt to avoid too many press reporters all seeking to see the latest head!

Please send the photographs to the Guildhall as time is running rather short.

With best wishes, yours sincerely Eve 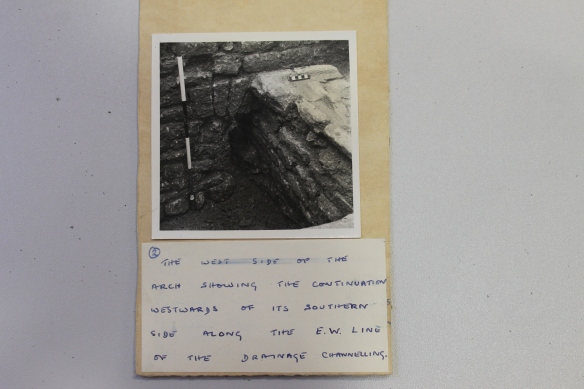 Thank you so much for your letter and help over the Chedworth stuff. I enclose what I hope will be an adequate report for the NT…

I am enjoying life at the Guildhall very much indeed although it is extremely hectic there at the moment. The other morning we were crowded out by the press (a usual event in the past Mithraeum statue-a-day week).. The statuary is absolutely fantastic – Miss Toynbee says that the Serapis head is as good, if not better than anything in the Rome museums…

Best wishes to all Eve

The aim of the short excavation was to discover if the mound to the south of the south wing had been disturbed since Roman times, and if not, whether it merited further investigation and, incidentally, whether the present reconstruction walls of the south wing are correctly aligned….
Eve Rutter 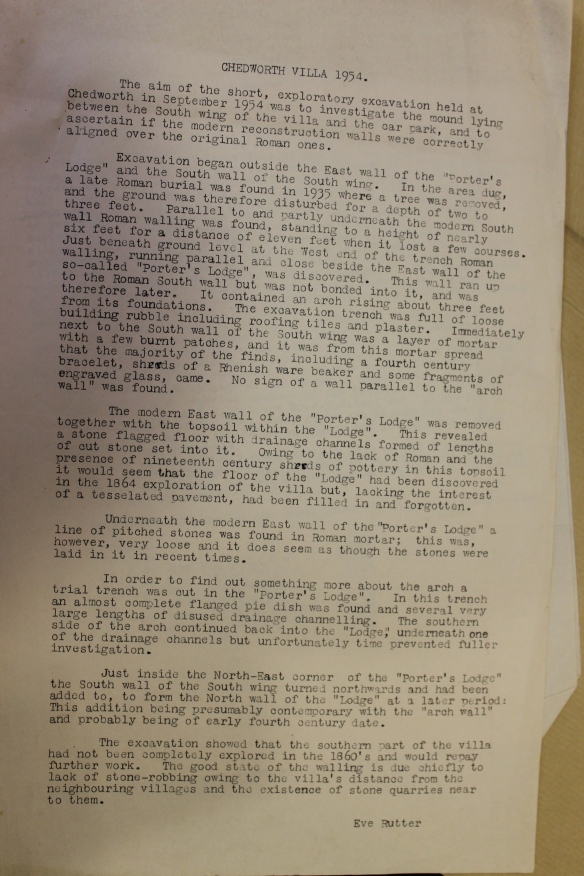 I was delighted to get Miss Rutter’s fascinating report on the excavations. I should like you to know how how grateful the Trust is to the Museum for undertaking this work on our behalf…

As regards the possibility of further excavation next year, I am asking Mr R. Stewart-Jones our representative for Gloucestershire to get in touch with you…

..I sent the Chedworth photographs per express and hope they will arrive in time. I enclose the bill for the film and some drawing paper…

I am interested in Richard’s “C.I.D.” investigations on the bracelet. It was not close by the coffin, at least not close enough to be part of the burial I shouldn’t think. Anyway the details I could gather from Mr Irvine about the burial suggested that anything worn by the child when inside it could not have slipped outside the coffin stones, or if it had only just down the side. There were no human bones otherwise associated with it. Anyway I shall be glad to hear Richard’s final verdict. Gold sounds exciting, quite beyond one’s wilder dreams: I only hope this doesn’t mean that I shall be pursued by coroners seeking to prove that the owner is still alive and presently returning to recover his lost possessions!
Life at the Guildhall has become less hectic this week. Mr Cook and Mr Merrifield are very kind and have made me feel very welcome. Mr Cook seems a little worried that I shall expect every excavation to produce marble heads!

…In the afternoon I went down to the site and the temple has produced a very nice door step..The “reconstruction”, if one can call the pile of Roman used debris so, is a pathetic affair and the way they are carving the original up with electric drills is tragic.

How is Oxford? it seems odd not to be pottering about it. Look after yourself and don’t catch any more peculiar diseases ‘cos I shan’t come out to the Slade this year Love Eve

Re the Chedworth stuff Mr Irvine asked if it were possible to have a short report for the Museum. Secondly, were two coins amongst the stuff I brought back? Mr Ovenall said he would have them sent to Dr Sutherland. Only one is from the site, the other was given to Mr Irvine by a local forester for identification.

John Harris tells me that the “graffiti” “samian” looks suspicious. I haven’t looked at it myself apart from giving it a hasty clean. It should be alright according to the level it came from. Has Dr Harden had a chance to look at it yet? I should be interested to know the date as it was found in connection with the Rhenish ware which is the only apparently early pottery amongst fourth century pie dishes etc..

Hope to see you fairly soon. Give my regards to Roper and Miss Carter Yours Eve

Thank you for sending me the Chedworth graffito for examination.
I read the graffito as ABCDEFGHI[… It is not clear whether further letters were cut or whether the space after I marks the termination of the original text. The letter forms are of Roman type and unlike modern falsifications. This graffito may have been cut when the bowl was intact or on this sherd after the fracture of the bowl.
If space allows, I should like to include this in my next JRS report.
Yours sincerely R.P.Wright

I am enclosing a copy of Mr Wright’s letter about the Chedworth sherd with the alphabet on it, from which you will see that it is perfectly good Roman graffito. If you felt like it you might drop him a line to say that you would be glad for him to publish it in J.R.S.

Thank you very much for your letter which greeted my return home. France in many ways was maddening…

As regards to Chedworth, I am interested to continue the excavation of the Porter’s Lodge area to see whether there is a definite clue as to what it is..

I don’t like to ask Mr Cook to “wangle” me the extra time off which Chedworth would probably involve. However, if it is a case of now or never with the National Trust I could ask him about the possibility..

I have wondered whether anything should be due in the way of an interim report..should the local archaeological society at least have a note of what was found in their reports…

Transactions of the Bristol and Gloucestershire Archaeological Society Vol 78 1959

the so-called Porter’s Lodge (Room 2) which was proved by excavations conducted by Miss Eve Rutter, now Mrs Harris, to have had a very different purpose. It proved to have been twice reconstructed, serving as a latrine in the first and second existence, but deprived of the sanitary fittings in the final stage. Sir Ian Richmond

The Museum of London has forwarded your enquiry to me. I worked with Eve Rutter in the 1950s employed to record the archaeology while the old WWII bomb sites were being developed within the City. She married a John Harris and left the Guildhall Museum in the early 1960s. He was a specialist in the cult of Mithras I think.

Sorry not to be of more help.

Eve arrived during great excitement: the extent of Londinium’s temple of Mithras was beginning to be revealed together with its exotic statues and carvings (see British Archaeology no 140, Jan-Feb 2015). The discovery caused great excitement in the press, thousands queued to visit the site. The P.M., Winston Churchill stepped in to give the archaeologists more time.. but the temple was eventually broken up and re-erected by the building developers.. the structure blocked their construction site.

Museum of London is involved in a new project to rebuild it in a far more authentic way in the next few years using the information collected by the London archaeologists back in 1954.

Through Mithras, Eve met her husband and together they published a definitive work on eastern religions in Roman Britain.

I wonder where her archaeological career took her after that…

It would be good to speak to her about her memories of Chedworth all those years ago.