The formal garden shown on William Woodward’s map of 1773. Traces of the pathways dividing the four lawns can be seen as parch marks and the geophysical survey but the semi-circular feature has not been detected during the surveys

We know about William Woodward’s map of 1773 showing the formal garden. This design might have included elements of the garden made for the house when it was first built in the 1660s. 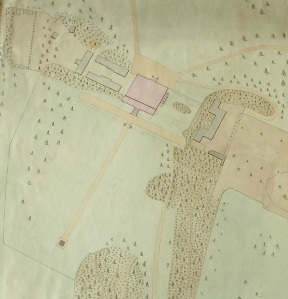 From a plan of Kingston Lacy Park and Garden dated 1849, only 20 years after the obelisk was erected. The lawn is much the same today although the 17th century stable block on the right hand side of Kingston Lacy House was demolished and moved to the left in the 1880s (it’s the restaurant now).

The garden was radically changed in the 1820s and it has looked much the same ever since but there are other things here which we can’t explain.

In spring 2013, Andrew, Nigel and I walked across the South Lawn discussing the Kingston Lacy park and garden conservation plan. For many years they had noticed strange brown patterns in the grass during dry weather.

A pencil sketch of the 1773 garden over the present garden with the geophysical survey features drawn onto the plan. The house is at the top of the drawing and the obelisk at the bottom.

We decided to try to find out what they were and carry out a geophysical survey of the lawn in July as part of national archaeology festival. We plotted the parch marks, walked up and down with the resistivity and gradiometer survey machines and in 2014 Paul brought the ground probing radar from Bournemouth University and added to the ‘non-invasive’ information.

The resistivity survey plot of the South Lawn. The blue band right of centre is the path and obelisk. Kingston Lacy House lies just beyond the top edge of the survey. The red block of colour marks the position of our trench on the left side of the circular feature picked up on the survey and seen as an earthwork on the ground.

The patterns were mapped but they do not correspond with any known garden. Were they really garden features? They seem to blot out the 1773 mapped garden design and are crossed by the 1820s path to the obelisk. There seems to be a very limited time frame to fit this potential design into.

Beyond historical evidence there is only archaeology…so we dug this week’s trench, just a small one in a very large lawn, to test a place which is clear on the geophysics and visible on the ground.

One of our chunks of brick and below it the two fragments of post-medieval pottery we found, typical white ware and blue and white wares of the late 18th to early 19th century. Below them, the black blob is a late prehistoric piece of pottery over 2000 years old.

We found the lawn soil overlying a surface with lots of black clinker, the odd iron nail and bit of brick. Just a thin skim above a deeper soil but it was always moister towards the obelisk path. That’s where the water stayed during the heavy rain. That’s where the soil was deeper mixed with fragments of lime (was it reused as a garden bed? lime to make the neutral acid soil more alkaline?). The soil overlay a 250mm deep mixed clay deposit filling a curved edge cutting through the natural sand.

The earthwork on the surface reflects this clay-lined feature which the rain water wouldn’t soak through. So our reasonable interpretation is that this was a pond and part of a garden that we have not found a documentary reference for. None of our maps show it.

So here is a story to fit the evidence. At the end of the 18th century, Kingston Lacy was re-designed by architect Robert Furze Brettingham for the then owner Henry Bankes. A new house deserves a new garden and perhaps this is shown by our geophysics and excavation..except Henry’s son William was given an obelisk from the Island of Philae in Egypt so he persuaded his father to create a garden for this extraordinary possession and the newly designed garden was swept away..

However, such formal gardens indicated by our geophysics, with a small pond like the one we found, would not be at all fashionable c.1800, a more open landscape/picturesque style might be expected so an alternative story is that the pond is earlier than the 18th century brought closer to the surface by the landscaping out of the 18th century garden in the 1820s…If we had found a good date-able piece of pottery or a white tobacco pipe bowl in the pond clay filling we would have been able to provide a more definite date for the feature. 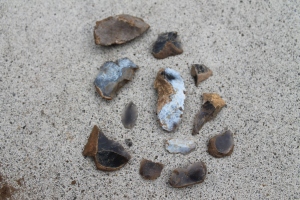 Some of the flint from the South Lawn. The top grey chunk has been worked but then burnt in a fire. The other flakes also date to the Neolithic or Bronze Age. They probably haven’t moved far but were disturbed during 17th-19th century gardening work.

The prehistoric pot fragments and the burnt and flaked flint show that there were people living here long before Ralph Bankes first commissioned Kingston Lacy House in the 1660s, before Henry de Lacy’s medieval manor of the 13th century, before the Saxon royal farm, before the Roman town at Shapwick and even before the Iron Age hillfort of Badbury Rings. 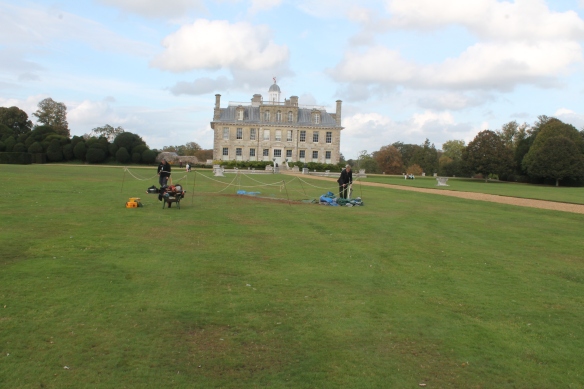 The end of the excavation, the trench backfilled .