Day 1 for me but day 2 for the boys, started a bit breezy and with blue skies and lots of clouds of all hues. Matt was finishing the section of the trench at the obelisk end, Martin was just setting up the maps and plans for everyone to see. The remaining gazebo was set up only half way, hoping it would not go the way of the other one, which flew across the lawn in the high winds and got a bent leg.

Matt working in the obelisk end section of the trench

I set to marking out the middle section next to the small sondage (a hole to find out what layers there are and how deep) and started to take off the thin layer containing clinker and brick, down to a soft layer on the path side and a very hard sandy/clay layer on the other side. There were lots of flint flakes and worked flint coming from most layers including a couple of lovely borers (like a prehistoric bradawl). Possible features were just starting to appear when the rain started, a few spits and spots, then the wind got up and large drops of rain began to increase. The call to retreat to the gazebo rang out and we made it just in time to hold the tent down as the squall hit; we had to shout to hear each other! When it stopped we went back to the trench and found we had a number of water features!

A very wet trench. the different colours of the layers showed up well after a drenching!

A quick bail out and it was back into the soggy trench. 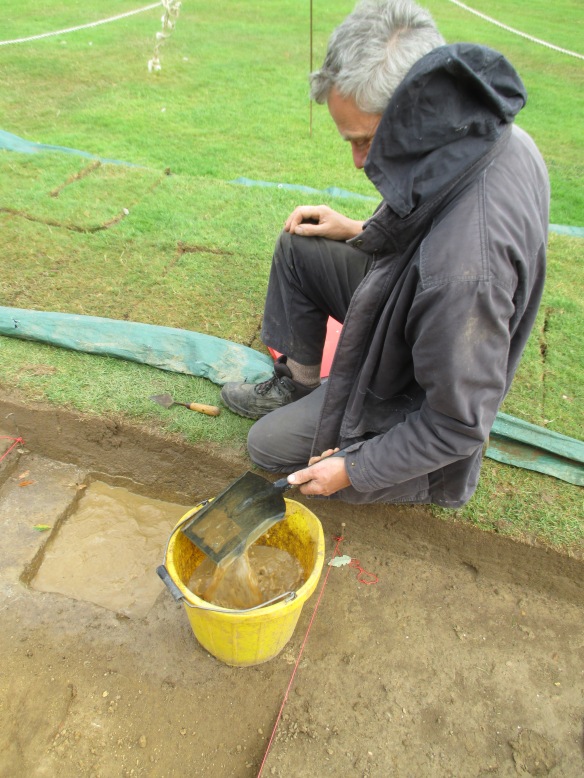 A hand shovel makes quick work of the water. Must remember a sponge next time.

Martin decided to dig another sondage, to check if the hard orange/yellow surface was natural bedrock or a re-deposited layer, it looks interesting. Tomorrow will be make or break so watch this space 🙂