Why can’t we keep it open? We just can’t. It would quickly be mashed by Chedworth’s winter frosts. Weeds would colonise the tesserae and roots break up the pattern. We can’t expose something and allow it to be trashed. So the last day was backfill day. 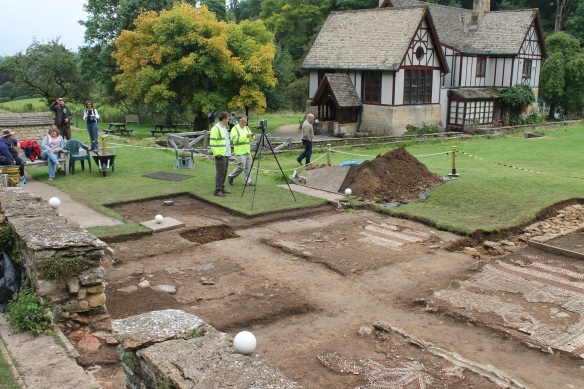 Bill and his team setting up the laser scanner to make a 3D record of the mosaic surface. Interesting Dr Who style white station orbs.

Nancy had sourced the right sort of cover fabric. Nicki had got it sent by courier to make sure it arrived on time. While I completed the site record, drawing the plans and sections and writing up the context sheets, Nancy organised the covering. Sandbags were filled with topsoil to support the mosaic edges and fine topsoil was placed on the terram sheet.

Visitors hurried from reception to get a last glimpse before the mosaic was consigned to the dark once again. 150 years since its first discovery.

While drawing the plan of the site we found a mottled stone which on closer inspection turned out to be a piece of Italian marble. An exotic material brought to the villa to decorate an architectural feature or perhaps part of a panel on a piece of furniture.

So with all this highly accurate digital recording why measure and draw it the old fashioned way? Well.. it’s all about relationships. One has to touch the soil, by measuring you question what you seen. The closer you look, the more you understand and spotting something on a scan once the site is backfilled is too late. That’s my excuse for playing around with tape measures and a drawing board while 11 days of spoil were being heroically relocated in a single day.

A light misty rain fell every now and then, making drawing difficult. I measured a piece of stone which I thought at first was slate but turned out to be a corner piece from an Italian marble panel. Proving again that this place was an opulent mansion and we now see only the bare bones of something which was once quite magnificent.

The last pieces of excavation in room ‘e’ revealed that the wall was later than the east -west wall on the right but earlier than the colonnade wall (top left) because it runs under it. Water probably entered the feature from the baths (top left) and drained out of the centre of the east side (bottom right).

The water feature in ‘e’ became even more confusing when I asked Rob to make a narrow trench to link his 1.2m square trench in the south-west corner of the building towards the mosaic to the north. The square trench had been filled with Victorian backfill 1.0m deep from top to bottom but the northern extension found a Roman mortar floor at 0.4m and by making the north side of the square trench vertical it became clear that our trench had copied the Victorian exploratory trench and everything north of it appeared to be undisturbed Roman. 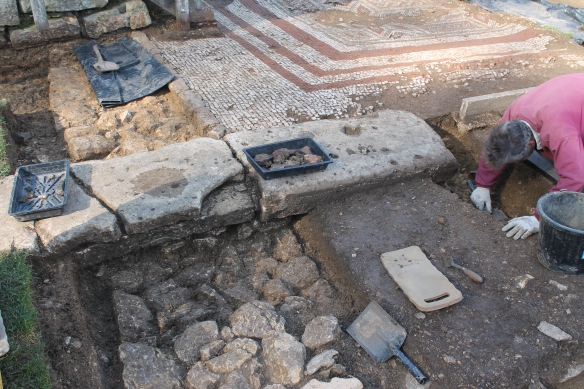 Too late to understand it better. The north extension did not find a flight of steps into a bath but a rough mortar shelf with fragments of blue lias slabs crushed into its surface. We can imagine a supply of used water from the baths entering this feature from the north and perhaps surrounding a statue or fountain within the building before leaving via the drain we know about on the east side. We know a bit more about this feature now but not enough. We need to look around for some comparisons. 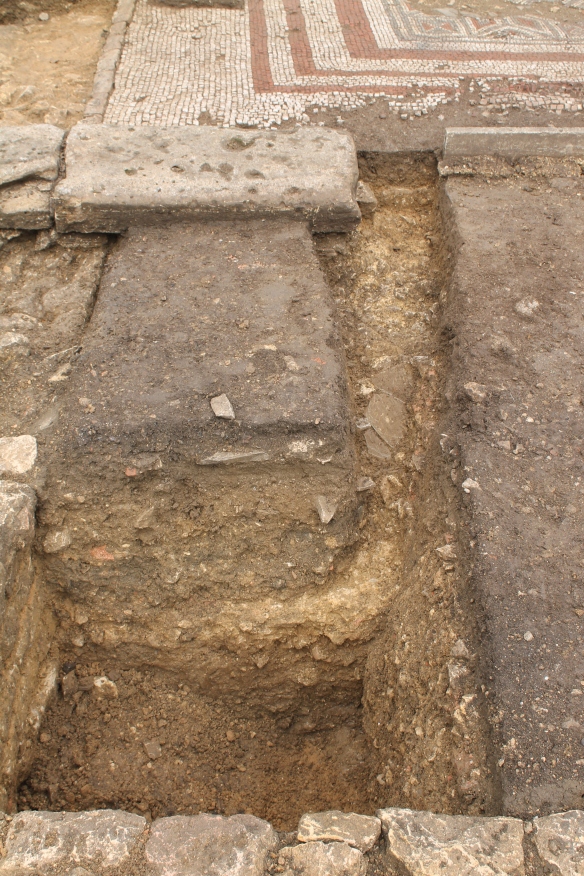 Rob’s trench across our ‘water feature’ in ‘e’.
He extended his 1.2m square trench in its SW corner north towards the mosaic room wall. The big block of stone is part of the late Roman colonnade wall which is contemporary with the mosaic. It runs over an earlier wall line which you can see at the end of the trench on the right hand side of the stone. Rob’s extension picked up an uneven mortar floor which sloped down towards the square trench and has blue lias stone slabs broken onto its surface. The filling of the square trench had all been Victorian backfill but by cleaning the north trench wall back the Roman mortar surface could be seen overlying a compacted clay layer. So there was a Roman platform of clay and mortar extending into the walled ‘water feature’ Had the Victorians dug through it or was the south side meant to be deeper. Over 1.0m deep from the wall top to the stone and mortar base.

Sir Ian Richmond’s walls did exist. Sometimes they were buried quite deep below his concrete but they existed. We did not prove or disprove the interpretations as early baths he gave them. 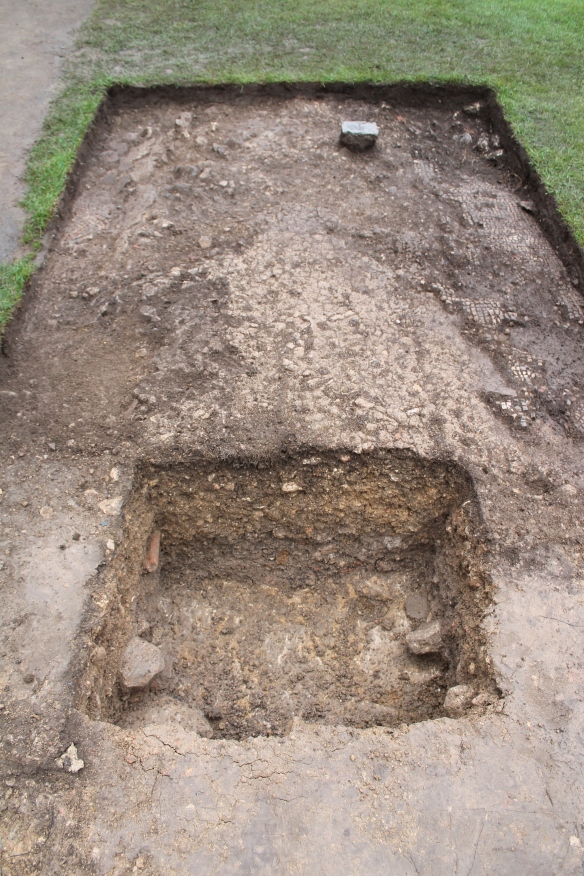 A trench to test one of Sir Ian’s walls. This one lay 0.3m deeper than the base of his interpretive concrete walls. The line of the buried wall would have continued east under the centre of the ‘Reception Room’ mosaic. Our extension trench only found the mortar bedding for the mosaic with one or two fragments at the edges.

Finally I was finished with the recording and threw myself fresh into the backfilling and hit a wall of congealed rubble, mud and clay. The rain had mingled with the spoil heap, seeped down to the waterproof tarpaulin fusing it into an unyielding barrier. Shifting it was very hard work but everyone worked so hard to put it back where it came from and eventually we saw the grass again and the vast heap of dirt had gone.

This is the earliest layer we reached a cobbled floor surface which is covered by the ‘water feature’ west wall which itself pre-dates the mosaic floor.

Thank you so much to everyone who helped over the two weeks and all the encouragement of the Chedworth staff and volunteers and of course the visitors who cheered us on…but Nancy and I would particularly like to thank the Bank Cottage stalwarts Harry, Carol, Kate and Fay. 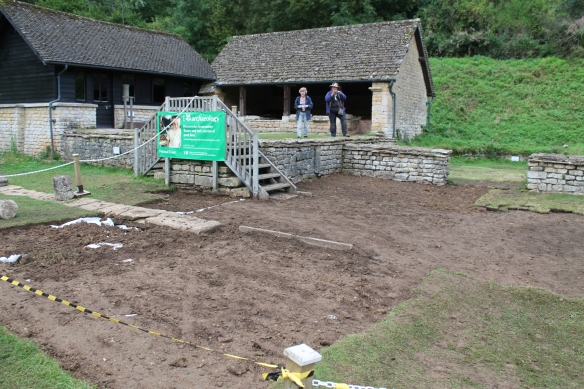 All safely covered up again.