This work is part of a 5 year research plan supported by English Heritage to understand the North Range of Chedworth Roman Villa to enable the design and to raise money for a cover building. On Friday, we will rebury the site but we now know the potential for future conservation and display of the villa’s hidden gems.

Apart from the mosaic we also want to understand the features that James Farrer uncovered in 1864 (150 years ago 2014) and Sir Ian Richmond in 1963. We do not have photographs or drawings of their work. 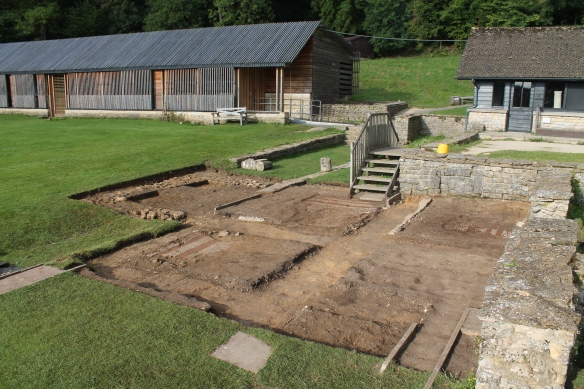 Early morning 6th day after removing covers for photos. The islands between Sir Ian Richmonds wall trenches of 1963. We have lettered them in anti-clockwise order from bottom left ‘a’, bottom right ‘b’, ‘top right ‘c’. then ‘d’ in front of wooden steps and the ‘water feature’ is ‘e’ top left.

We have uncovered area ‘e’ which is a walled enclosure which projects south into the inner courtyard of the villa.
It is thought to have been an ornate water feature of some kind but we do not know how deep it is or how it functioned. Richmond exposed the wall tops. Farrer dug it out and then it was backfilled with Roman spoil from the excavations. Every now and then a piece of Victorian pottery or a button betrays the fact that we are dealing with something 150 years old rather than 1600. Rob has found a clay lining and fragments of fallen pink mortar but he is about 0.6m deep and has not found the base yet.

We have put two small trenches into the water feature ‘e’. Rob is taking out 19th century backfill. Most of it is Roman debris but from time to time we find Victorian china mixed in with it.

We need to discover details of Richmond’s early walls and I investigated the one that runs under the stone steps. A line of stones proved to be edging for the grand reception room mosaic that runs against its east side. Below Richmond’s concrete was clay mixed with 4th century pottery and this overlay a wall with a mortar floor against its west side at a lower level. I wonder whether the edging stones against the mosaic indicate that there was a door into the Reception Room here in the late 4th century.

This is Rob’s trench against the water feature’s south east corner. A view from the steps towards the villa courtyard. He is finding some large lumps of pink plaster which may once have lined the pool. We don’t know how deep it is and what the floor is made of. In the foreground is my trench to understand one of Richmond’s walls. Beneath the concrete was a line of stones. Jan cleaned the mosaic here. The stones were a kerb for the mosaic edge and had been built over 4th century backfill which covered the earlier wall. The kerb/curb may indicate a doorway into the reception room from the west between the steps and the colonnade marked out in stone slabs middle distance.

We have almost completed the uncovering of mosaic islands ‘c’ and ‘d’ now. ‘c’ has some significant loss but ‘d’ is good. Across the wall cutting to the east area’a’ has also lost quite a large area. The decorated panels are varied and impressive. We still have area ‘b’ to uncover but things are progressing well… oh dear heavy rain on Monday we will need to make the most of today. 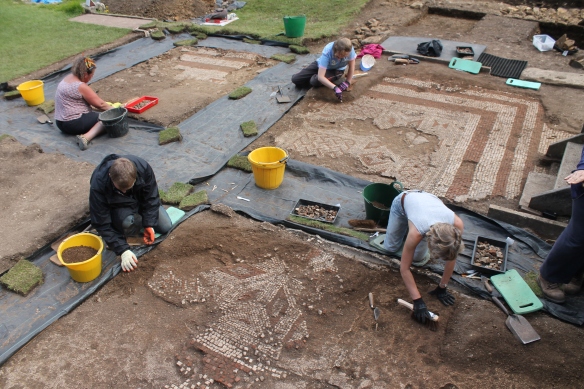 This is the mosaic towards the end of day 6 looking south-east from ‘c’. Within the red and white stripes forming the edge design, the various types of decorative panels are emerging. In the foreground, Harry has uncovered a ring of diamonds forming a star-like panel.