Last week I was asked to look at something that had been found behind the garden lake dam at Stourhead, Wiltshire. It’s a short ride from Warminster, skirting the Longleat Estate’s Sheerwater, past Maiden Bradley through the chalk ridge and back into Greensand country. 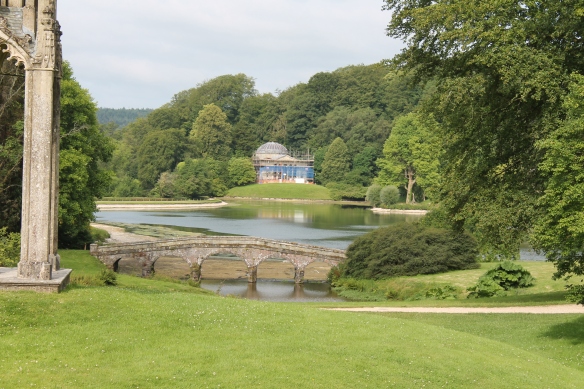 The view from Stourton village would once have been along the stream but this was blocked in the mid 18th century to create a lake. One of the Neo-classical garden buildings, the Pantheon is under repair at the moment. The dam lies to the left.

At Stourton church there’s the amazing view past the Bristol cross, across the turf bridge and lake to the Pantheon. This Neo-classical temple folly is under scaffold at the moment, the portico has been leaking and needs to be made water tight again. The view looked particularly beautiful in the early morning light. 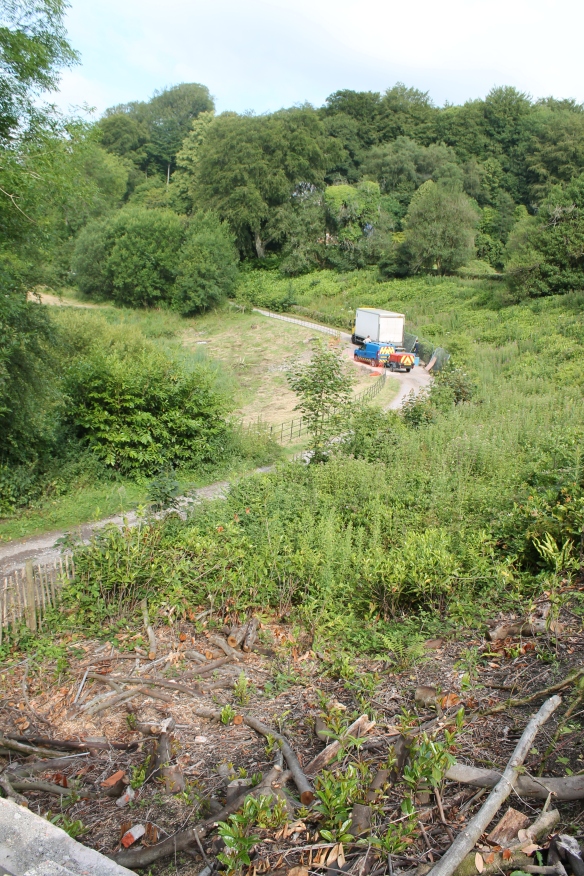 Behind the Stourhead garden lake dam where the track had subsided. The drain was found beside the vehicles.

I drove round the lake under the Rock Arch and took a right behind the dam. Half way along was some fencing across the track which divides the Garden Lake from the Turner’s Puddle Lake. I was told that the track had subsided into something. They had dug down 2.6m and found a collapsed stucture. A brick arch over a culvert lined with Greensand blocks and floored with blue lias flagstones. Nicely made but now blocked with silt. 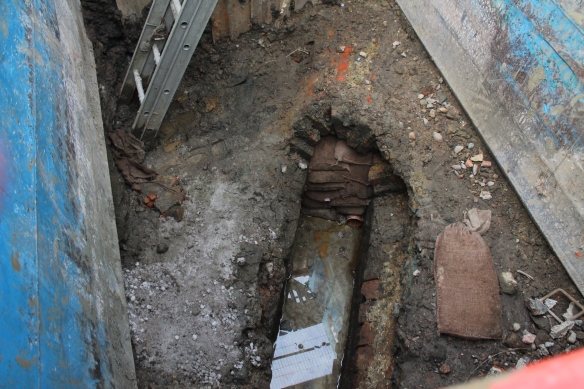 The well-built brick lined drain 2.6m below the track surface.

One idea was that it was built in the mid-18th century to carry the River Stour during the original construction of the lake for Henry Hoare. It was certainly of that date but may have been designed as a drain to let the water out when needed. This would transfer the water from Garden Lake to Turner’s Puddle Lake and enable de-silting and repair of the lake from time to time. I walked down to Turner’s Puddle lake edge and saw that the culvert outlet had been exposed as part of the work.

Water management at Stourhead is often needed. If silts build up, the lake depth is too shallow, the water becomes too warm in the summer and algae and other vegetation begins to close over the water and spoil the view. The Nautical Archaeological Research group dived on the lake bed a few years ago to map submerged structures and carried out a sonar scan of the lake bed for the National Trust.. taking lake bed samples to measure the depth of silt. 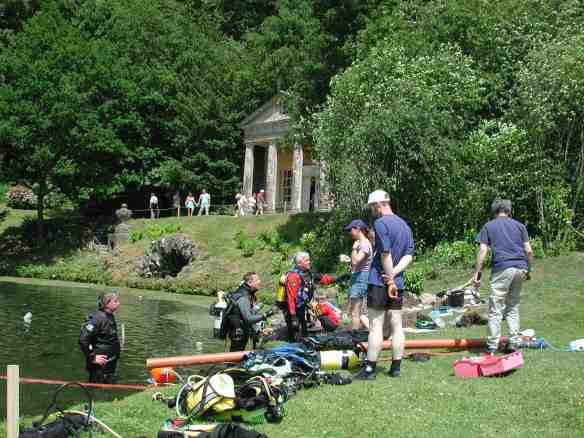 The Georgians were dab hands at water management and large bodies of water need regular monitoring. If the dam breaks it can cause mayhem down stream. Sometimes there’s not enough water and it has to be held back and conserved. Sometimes there’s far too much and spill-ways, drains and sluices are needed. At places like Prior Park, Bath and Dyrham South Gloucestershire, cascades were designed to make the excess water an aesthetic feature. A hatch is lifted a long metal rod is turned and the water flow regulated. 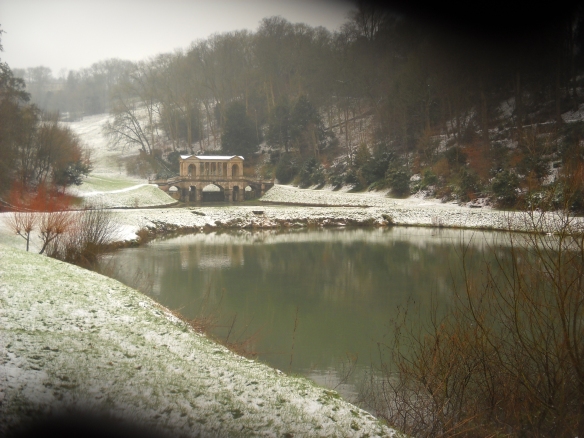 One of the dams at Prior Park recently repaired. The water is regulated using valves and sluices.

The flight of massive 18th century lakes at Woodchester, Gloucestershire blended landscape design with industry. Beside the upper lake was a brick kiln and further down the valley, the fall of water between the lakes enabled stone-lined traps to be built along the lake spill-ways to catch eels. 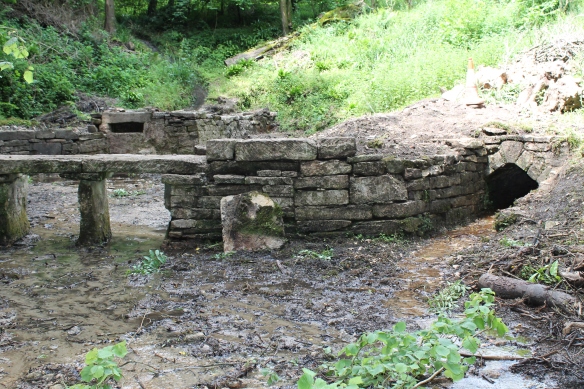 Below the Park Mill Lake. The mouth of the drain can be seen on the right and top left the dam spill-way to take excess water feeding into an eel trap before discharging into a pool.

Park Mill was the name of the bottom lake. There was once a large flour mill where the corn was ground using the flow of the water from the dam to turn the grinding stones. We found one stone amongst wall footings during an archaeological excavation. The mill had been demolished in the 19th century and the site was found again when work was carried out on the dam to meet enhanced Environment Agency specifications. 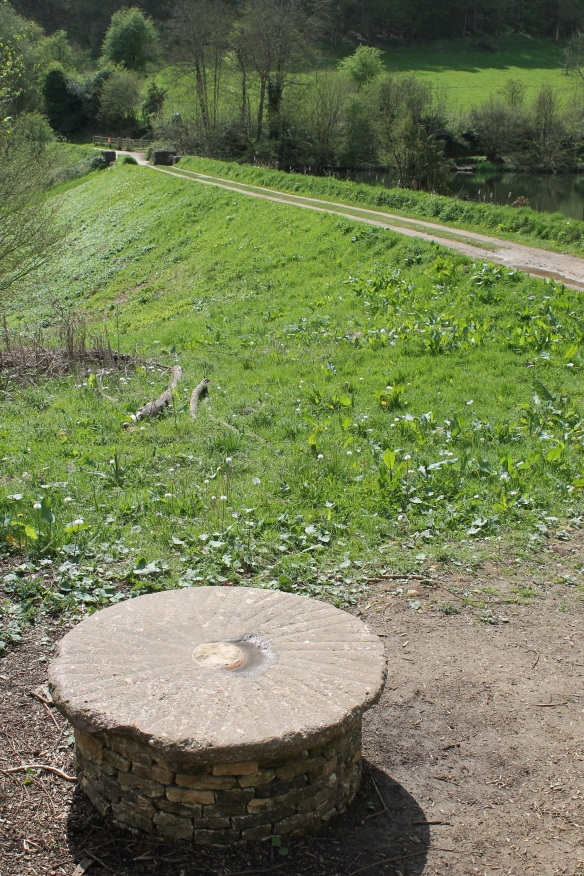 Park Mill dam Woodchester. The water from the dam was regulated in the 18th century to drive a flour mill. The building has long gone but this mill stone was excavated on the site beside the footings of the building.

The National Trust has been awarded Higher Level Stewardship funding which has enabled Woodchester’s lakes to be revealed again in their 18th century splendour. Take a trip there and prepare to be wowed. 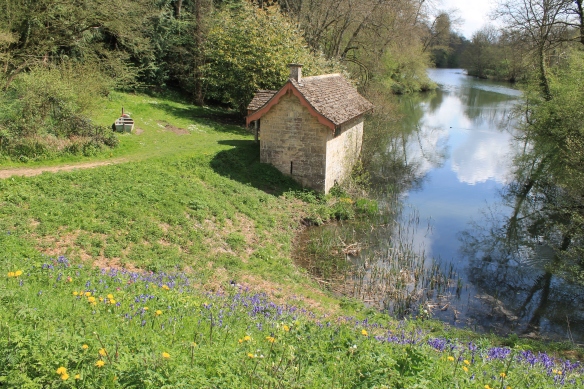 Woodchester, Gloucestershire. A chain of lakes utilised both for beauty and industry.