Mr Newman once started his English class with a matchbox. ‘What’s this’ he said. ‘It’s a matchbox sir’ said Justin. At 12 it seemed a reasonable answer to me. ‘Call that a description !’ he shouted and threw the matchbox at Justin. That was the lesson. We struggled with increasingly complex descriptions and the matchbox kept sailing across the classroom. Even at the end, the names of the children of the match maker and the exact chemical components of each match head still remained a mystery. Great lesson though….

And what of Dyrham South Gloucestershire, above Bath, just south of the M4?

Dyrham from the east. placed on the floor of a natural amphitheatre. The statue of Neptune in the foreground is one of the few visible surviving elements of William Blathwayt’s original garden for the house. The formal elements were swept away to create a landscaped Capability-Brown style park in the later 18th cenutury.

It’s a Baroque stately home built from 1691 for William Blathwayt influential member of William III’s Civil Service who laid out an intricate formal water garden in the fashionable Dutch style. ‘Call that a description!’

Schloss Charlottenburg Berlin, built 1695 (while Dyrham was being constructed) built for Sophie Charlotte, wife of Frederick III Elector of Brandonberg. The gardens near the house are maintained in the style that Dyrham’s formal gardens originally had.

Archaeologists look beneath the surface, they interrogate the clues in the landscape and know that places are far more interesting than the obvious.

Dyrham House is placed on the floor of a natural amphitheatre. A stream flows under the house and emerges as a cascade feeding two lakes in the west garden. Such a well sheltered and watered location, someone must have worked out that this would be a fine place to live long before the 17th century. Of course they did. There’s the medieval parish church beside the house. There have been many Dyrhams.

The perspective view of the Durch style gardens at Dyrham in 1712. Our excavations and geophysical surveys have proved some of the features in the drawing and found other elements which demonstrate later changes to the 1712 formal layout. The statue of Neptune can be seen top centre above a water cascade that flowed into a canal in front of the orangery on the right hand side of the mansion.

William Blathwayt married an heiress and used his money to knock down the old Tudor manor and build his stylish new mansion. Dyrham is mentioned in Domesday book of 1086 and there is a document describing the medieval house in some detail in 1415. As there was no surviving male heir it was split between two Denys daughters Isabel and Margaret and every building and room in the manor was described and awarded to one or other of the girls.

There’s a drawing of William’s redesigned Dyrham dated 1712 and it shows how intricate the garden and park were at the time. At the top of the slope to the east was a statue of Neptune and from here a great cascade of water flowed down towards the house feeding a long canal beside intricately designed garden beds framing paths, fountains and avenues. To enable the water works, a dam was built out of sight of the house to build up a head of water which was then channeled to Neptune.

Too much to maintain.. and it became unfashionable, so the whole thing was swept away in favour of a landscape park in Capability Brown style in the later 18th century. Only Neptune remains.

The 1712 drawing by Johannes Kipp seems too much to believe but in 2001-2 we looked beneath the grass in the West Garden and there was the entrance to the inner gate and the pitched stone path leading towards the west entrance of the mansion.

A small trench in the middle of the lawn in the west garden discovered the gateway to the inner garden and the pitched stone straight entrance track leading to it. Bottom right is the central socket for holding the ornate double-leaved gates in place. Top left is a raised metal fixing for holding a gate in place when open. One of the stones had been part of a window reused from an earlier house.

We measured out another small trench and found the massive foundation for a statue where Kipp shows that a stone sphynx had been built as an eye-catcher in front of the stable block on the south side of the mansion.

The trench in the lawn in front of Dyrham’s stables. This found the footing for the sphynx statue shown on the 1712 drawing.

The medieval church, perched on the north valley slope shows that the valley floor has been greatly altered to create Blathwayt’s garden. What survived of the earlier Dyrham’s?

Beside the house is the medieval parish church. The late 17th century mansion is the lates of several re-designed Dyrhams that the church has witnessed. Cutting trenches in the lower garden reveal fragments of medieval cooking pot jutting out of the soil.

We cut a trench in the grass on the slope leading down to the lower garden and there found chunks of medieval cooking pot and animal bone jutting out of the slope. Blathwayt’s designers had cut away the natural curve of the valley to create level gardens and in doing so removed much of the earlier medieval evidence. The village probably once ran up to the church.

Looking north-west across the lower west garden where the stream that runs under the house emerges as a waterfall feeding two lakes before it leaves the garden and continues through Dyrham village.

A few years later the lakes in the lower garden were repaired and new paths were constructed and at this level even earlier occupation was found. Remains of a ditch and walling with fragments of Roman pottery, oyster shells and animal bones in it. A couple of sherds of pot are typical of the pre-Roman Iron Age.

An excavation to repair the lake wall and put in new paths revealed pre-medieval ditches and stone structures.

So Dyrham has always been a good place to live and people have adapted it over thousands of years.. 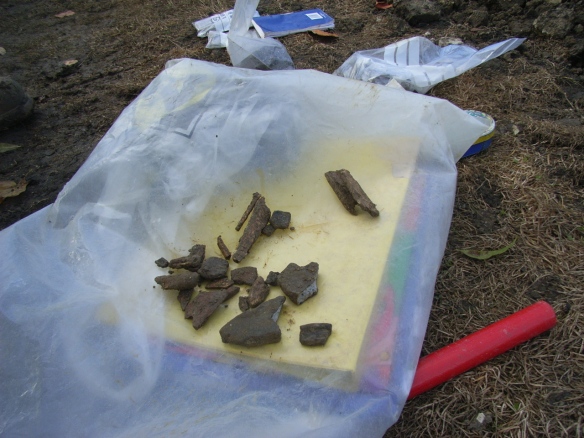 Fragments of Roman and Iron Age pottery found beside the lake at the lowest level of the garden.

It was also once a place of great strategic importance. The earliest reference to this place comes from the Anglo-Saxon Chronicle. In AD 577 (very rare to have a place named this early in British history) the West Saxon king Ceawlin won a great victory over the British kings of Gloucester, Cirencester and Bath. This drove a wedge and caused a permanent split between the surviving British strongholds of Devon and Cornwall and Wales…

We have never found remains of the battle here though we looked carefully when the new car park was built at the top of the hill in 1999. Perhaps the last stand was within the fortifications of Hinton Hill Iron Age hillfort on the north side of Dyrham Park.

There is a lot more to be discovered to properly describe Dyrham but that’s the great thing about archaeology.. the description is never completely complete.