The garden steps in front of Kingston Lacy mansion

Having just been to hospital having turned my ankle (just a sprain) I thought it was time for a little bit more from the  WWII American Army hospital at Kingston Lacy. We get a great insight into life at the hospital through the letters and photographs we have in the archive, lots of details about the hospital site, staff and patients. From the archive we are even able to get an idea of what they did when on leave or had a day off, including visiting the wider estate and local sights. 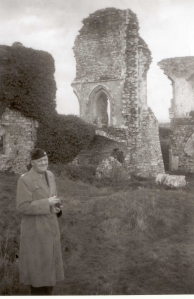 At Corfe Castle, in the upper ward the Gloriette in the background

We have a few photographs taken at  Corfe Castle an early  medieval castle, and part of the Bankes estate since 1635. Most of the pictures feature the Officers but in one there is a large  group  including nurses as well.

the exit from the Keep, the main tower of the castle

We were never sure how much access to the house and gardens they had but from the photographs and memories we now know they used part of the house for the Officers and could also visit the gardens, right next to the house.

In the collection of photographs we have received from various families of staff who worked at the hospital we know they visited Southampton, London and even Scotland, this may have been after the war finished and before they went back to America.

Westminster Bridge front of the Houses of Parliament

The Forth bridge across the Firth of Forth

4 thoughts on “News from the hospital”