Where was the must go to Christmas party for all England back in 1371?

Rather surprisingly, Kingston Lacy in Dorset. Seems unlikely but true.

The present house was only built in 1660. The remains of medieval Kingston Lacy lie across the top of the picture as a series of earthworks below the 17th-18th century drives, paths and garden buildings. The line of the Roman road from Badbury to Hamworthy crosses the park from the top left corner to the upper left side of the photo and prehistoric flint, Roman and medieval have been found across the park. The old tree that revealed the manor house fell half way between the 1660s mansion and the top left corner of the picture.

John had just returned from France and had brought back his new wife to his London Savoy Palace. But where to spend Christmas? So many places to choose from, he was a king’s son after all and by his first marriage had got loads of property. As Duke of Lancaster he owned castles and manors all over the country. Now, with Constance, his new Spanish princess, he could call himself King of Castile.

He would throw a party and invite everyone who was anyone so that he could show her off. His dad Edward III of course, his sister-in-law the Princess of Acquitaine, various influential barons and his brothers. Not forgetting his ‘Household’ several hundred strong consisting of knights and retainers, esquires, grooms and valets. 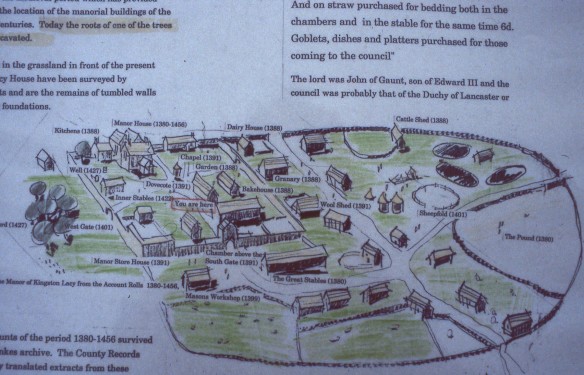 Using all the documents we could piece together a reconstruction drawing which shows the ‘Inner Court’ with the main manor house, chapel and other principal buildings and also the ‘Outer Bailey’ which contained the working buildings of the manor including the great stable, granary, barns and cattle shed..

The steward of sleepy KL probably had a bit of a shock when he received his master John of Gaunt’s letter, informing him of his decision. The manorial complex geared up into frenetic activity, preparing rooms and cleaning stables and outhouses. John sent other letters out, making sure that the food was in.
“We command that you take six deer and six dozen rabbits and bring them to our manor of Kingston before Christmas Eve, also the following Sunday and the Tuesday after that. Make sure they’re prize beasts and carried to us in good condition!”
He also sent his staff out to get the presents for the big day. He bought the King a pair of silver slippers, his senior advisor got a gold brooch, his Spanish knights were given silver caskets and his esquires 40s.

One of the 14th and 15th century account rolls that were discovered in Kingston Lacy house which describe repairs to the old royal manor.

So, long ago, Kingston Lacy was the Christmas resort of kings and princes. Kingston is a Saxon name because the land belonged to the King up to the 12th century. By the 13th century it belonged to the Earls of Lincoln, the Lacy family. Henry de Lacy was such a powerful baron that he gave his name to the place. He tended to spend Christmas here too. Its been known as Kingston Lacy ever since.

In 1485, after the Wars of the Roses, it was given to Henry VII’s mother but she didn’t want it, so it was demolished. A new house was built at KL after the English Civil War but the site of the old house was forgotten.

Wouldn’t it be great to find it. Such a place. Where so many powerful people gathered and discussed the fashions and politics of the day. Some of the old parchment account rolls had survived and these listed the wages of named workmen who repaired the great manorial complex. By putting together the historical clues we could create a reconstruction of the buildings. 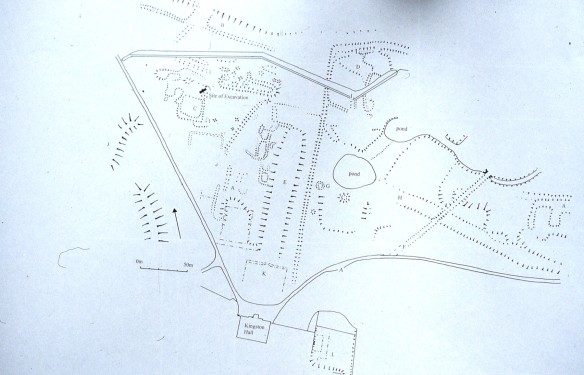 The earthwork survey I carried out in the park showed the medieval house and outbuildings underlying the post 1660s designed landscape features.

There was a storm in the park and a tree fell over. Medieval building remains were found in its roots. I walked up and down in the area north of the present mansion and measured all the humps and bumps. Then Geoffrey agreed to use our resistivity meter to see what lay beneath the grass.

Beneath the rubble was the remains of a 1m wide stone wall and an earth and charcoal floor covered in collapsed wall plaster, some fragments with graffiti scratched onto it.

It revealed the manor house twice the size of the current mansion and a range of other buildings. We needed to check so we dug a small trench 6m long and 2m wide. Beneath the turf was just a mass of yellow mortar bits. Deeper and there was the odd stone and then a wall began to emerge made of the local sandstone and over a metre wide. Suddenly at 0.8m the rubble robbing debris stopped and a band of black earth contained medieval pottery and food debris. This with fragments of glazed floor tiles alternating greenish yellow and purple brown.

Detail of the medieval floor strewn with animal bone, oyster shells and fragments of baked clay floor tiles glazed yellow-green or a purple brown. Top right you can see the thumb imprint of a tiler pressed into the back of the tile before firing to enable it to be keyed into the mortar bedding when the tiled floor was created.

Perhaps, invites to John’s Christmas party once walked across this tiled floor when it was beautiful and new.