It’s a basic rule of archaeology that the deeper you go the older you get. That’s why everything is excavated in sequence. Unpacking the information backwards from most recent to most ancient.

In 1987, we were puzzled by an apparent exception to the rule. It was the second year into the access and display archaeological project at Corfe Castle in Dorset. 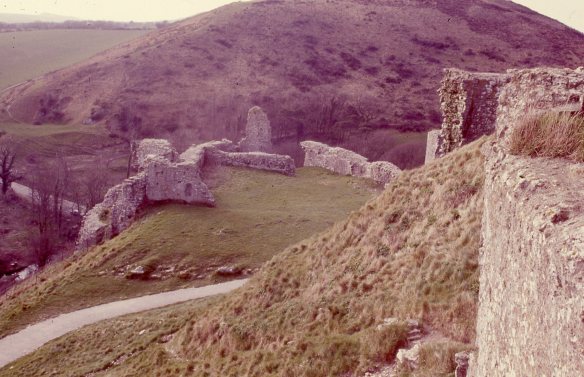 Looking from the Inner Ward down onto the West Bailey in 1986. The tarmac path runs beside the remains of a wall thought to date to the 12th century

Corfe ended its days as a stately residence in 1646. It was captured by parliamentary forces and blown apart. During our excavation campaign we only tended to take away the demolition rubble to reveal walls and pathways at Civil War level.

An important element of the National Trust access plan was to replace in stone the slippery tarmac path which led up the steep slope that crosses the Outer Bailey up through the middle gatehouse to the West Bailey.

In the West Bailey, traces of a wall could be glimpsed above the turf. This, it was thought, was a large medieval wall dating to the early 12th century. The idea was to uncover this wall and run the new path beside it showing it off to visitors so that they would know that this was the limit of the castle during the ‘Anarchy’ when supporters of the Empress Matilda held Corfe against King Stephen’s forces.

Just below the modern topsoil with its plastic smarties lids and crisp packets was a Victorian coin, some glass and below this large fragments of medieval pottery.

A scaffold walkway was erected as a temporary visitor route to enable us to dig up the path and reveal the wall.

We wanted to know the width of the great medieval wall, built to defend a royal castle. So we placed two exploratory trenches across it. The turf contained the sort of thing you would expect. Things dropped by recent visitors like snack debris (from Corfe, we have a near complete typological series of Twix wrappers decimal and pre-decimal!), the odd 6d and Victorian penny. Then quite a lot of 18th-19th century window glass… and then medieval.. lots of it. Chunks of limestone and pottery of various types.

This went down quite a way but beside us our medieval wall was looking rather puny. It only had a wall face on the east, downslope side. We scratched our heads and kept digging through the rubble.

Then the rubble disappeared. Peeled off onto smooth, level dark soil and out of it came a tobbaco pipe. That’s not right. Nobody was smoking in the middle ages, or were they… No, definitely not, the next find was a lead musket ball. Here was the missing Civil War layer beneath the medieval period and it continued under the 12th century wall. Madness. A puzzle. What was going on?

Curious. Below the medieval rubble was a smooth dark layer of soil. A buried turf and in it tobacco pipes and a musket ball or two.

John Wesley gave us the answer in his diary Wednesday October 12 1774.–

” Afterward we took a walk over the remains of the castle, so bravely defended in the last century, against all the power of the Parliament forces, by the widow of the Lord Chief Justice Bankes. It is one of the noblest ruins I ever saw: the walls are of an immense thickness, defying even the assaults of time, and were formerly surrounded by a deep ditch. The house, which stands in the middle on the very top of the rock, has been a magnificent structure. Sometime since, the proprietor fitted up some rooms on the southwest side of this and laid out a little garden, commanding a large prospect, pleasant beyond description. For a while he was greatly delighted with it: but the eye was not satisfied with seeing. It grew familiar; it pleased no more and is now run all to ruin. No wonder:
what can delight always but the knowledge and love of God?” 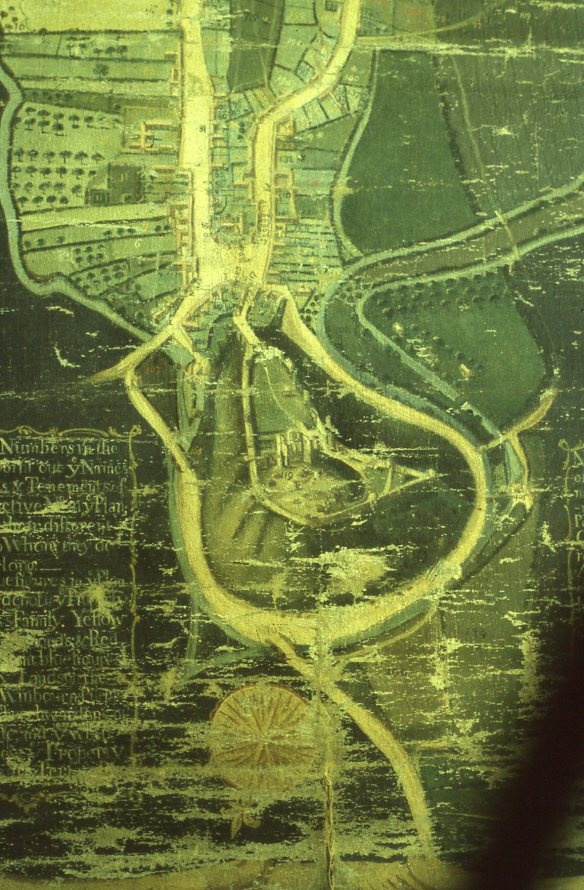 The 1769 map of Corfe Castle by Archer Roberts showing the ruined castle when the rector of the parish made himself a garden and residence in the north and south towers of the West Bailey.

The Rector of Corfe, a relative of the owner, John Bankes, levelled up the West Bailey in the 1760s to create a quiet retreat within the ruined castle. So,our medieval soil was dug from the north side and dumped on the south burying the old grass surface for us to uncover again 220 years later. The wall was his garden wall made of chunks of demolished castle rearranged.

The section modern turf over medieval over the buried turf and within it the evidence of the 1640s Civil War. The limestone pathway lay beneath with fragments of 16th and 17th century broken stuff trodden into it. Our blog emblem head was found near here. The path ran under the wall. Not a 12th century bailey wall but Rector Thomas L’Anson Bankes’ 18th century garden wall.

Glad we sorted that one out. So where was the 12th century wall? Deeper. We found it almost completely robbed away a couple of years later.

2 thoughts on “Upside Down Archaeology at Corfe”