We had a meeting at Kingston Lacy on Thursday. Sarah and Chris have just been appointed to create a conservation statement for Kingston Lacy park and garden. They wanted to get a good view, so Rob the House Steward took us up on the roof of the mansion.

The north side of Kingston Lacy House. Designed by Roger Pratt for Ralph Bankes in the 1660s. Revamped for Henry Bankes by Brettingham in the late 18th century and then done over again by Charles Barry for William John Bankes in the early 19th century.

We used the servants’ route via the back stairs, avoiding the billard room with its Egyptology collection and the library with its stunning array of 17th century Lely portraits. This includes one of Sir Ralph Bankes, who had the house built once Charles II became king (Parliament took the Bankes’ estates from them and had their old home Corfe Castle demolished because they backed Charles I in the Civil War).

Rob slid the roof door open and we climbed out into the sunshine and onto the flat lead roof. The park and gardens lay beneath us, bounded by a belt of trees and beyond it, on its hill, to the west was Badbury Rings hillfort.

We talked about the south lawn first. In the early 19th century, William John Bankes had brought back an Egyptian obelisk from his travels. He got his dad to put it up as the focal point of the lawn along with scupltures from Greece and Rome.

Kingston Lacy south lawn from the terrace showing the path to the centrally placed Egyptian obelisk from the Isle of Philae. James the curator has found letters from William John that indicate that he helped Champollion decipher the hieroglyphic writing that enabled the understanding of Ancient Egyptian history. The obelisk like the Rosetta Stone has an inscription in more than one language.

It is so dry at the moment that traces of earlier gardens can be seen as parch marks emerging from the grass. These include some strange parallel rows of dry circles and also earlier paths and beds. Historic maps reveal how each generation has adapted and changed the park over time leaving elements of earlier schemes in place. Next week we will survey the south lawn. 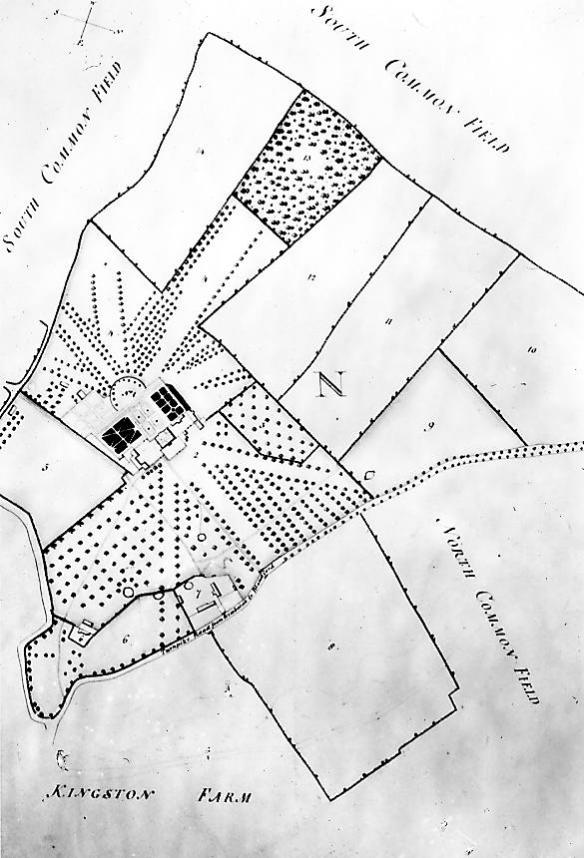 William Woodward’s 1774 map showing a very different design. On this map north is bottom right. Note the ‘crow’s foot’ design of vistas flanked by trees leading to the old line of the Wimborne, Blandford road. This survives as an earthwork but the road is now further north because the Bankes had it moved to extend their park.

Then we walked across the roof and looked directly north across the park where there had once been a grand avenue of trees shown on the 1742 map. Later, two diagonal avenues were planted to create vistas to the north-west and north-east. This was all a bit too formal and they were swept away by 1800. Chris and Sarah are starting by analysing the evidence of the surviving phases of tree plantings and how they relate to the earthworks on the ground.

The north view from the roof in 1990. Beyond the tent is the darker line of the wide central vista. On the right of this just above the tent is a chestnut tree and right of this is a circular earthwork, the footings of a classical temple folly. The tree was planted on a raised path running parallel with the drive. Sarah thinks that in the 18th century visitors to the house would approach along this path rather than spoil the prospect from the house by bringing their carriages along the central drive. The tree was planted to break up the straight line of the path when the less formal Capability Brown naturalised landscape park movement was in vogue. Left of the tent is a fallen tree blown over in the January 1990 storm that revealed old Kingston Lacy.

A 20m wide raised linear earthwork runs from the mansion house to the old road line and this preserves the line of the central avenue. When the soil was dumped here to create it, over 300 years ago, it lapped over the earthworks of something much older but that is another story.

Godolphin has launched the archaeology festival for NT in the SW. Kingston Lacy will get involved tomorrow and Tuesday. We’ll be setting up display and activity tents, geophyzzing the south lawn and plotting the parch marks and also giving guided tours of the remains of the original Kingston Lacy in the north park.

It would be great to see you there.