This week, I pulled together the drawings, finds reports and photos and began to write up a site which should have been published ages ago. 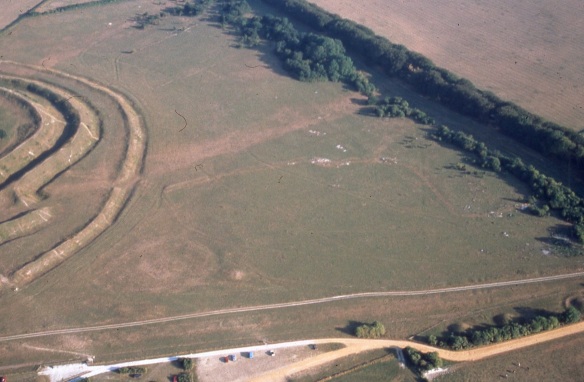 The ramparts and ditches of Badbury Rings hillfort are on the left. Along the bottom of the picture above the car park is the line of the Roman road to Dorchester. Bottom left, just above the road and to the right of Badbury is the roughly circular parch mark of an enclosure (about 60m in diameter) and within it the square block of parched ground where buried masonry makes the grass die back in dry weather.

The moles found it first. Heaving up bits of Purbeck limestone beside Badbury Rings. The stone shouldn’t be there. Purbeck is over 15 miles away.

Looking at it on the ground, the contours of something interesting can be seen. A 60m diameter bank surrounding a mound measuring about 15m across. It was suggested that it was a special kind of Bronze Age burial mound, which was reasonable given the number of barrows around Badbury.

In 1975, after a particularly dry summer, Brian visited, took photos and drew a sketch plan of what he saw. He sent it to the archaeological survey offices of Ordnance Survey, where it rested in their archive for 20 years. 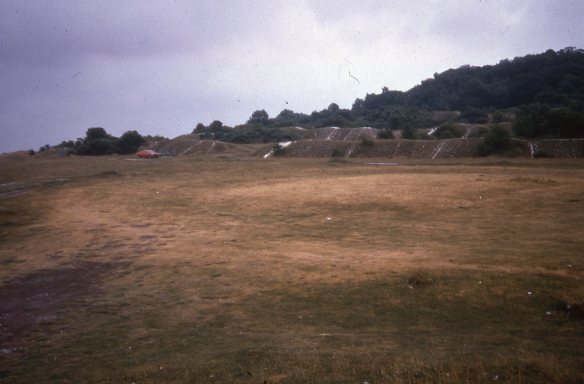 Brian’s photo taken during a very dry summer in 1975 when he thought he had discovered the temple.

I found the plan during a documentary search, when the National Trust’s (which had been given Badbury and the Kingston Lacy Estate in 1982) managing agent asked me to write a survey report for the archaeology of Kingston Lacy. Brian had written at the top of his sketch. ‘A possible Roman Temple at Badbury Rings’

We went back to the mole hills. They were full of evidence, lumps of mortar, fragments of pottery, oyster shells and bone. All sorts of stuff and we would often find holes across the site where unknown things had been dug out of the ground and taken away.

We resolved to prove whether Brian’s temple theory was true, and protect it. English Heritage gave us permission to evaluate.

Geoff did our geophysics which showed an octagonal walled enclosure surrounding a 15m square building with another rectangular building against the inner edge of the octagon. So we laid out our long narrrow trench from this edge building to the centre.

It was mostly foul weather. We had decided to camp to stop finds being taken at night and it poured with rain as we cut the turf. Reoccupying an anciently occupied space and revealing it.. communing with the remains of past lives night and day, is a curiously poetic and emotive thing. At night, the wind rattled the guy ropes and the storm at the end of the dig almost brought our photographic tower down. 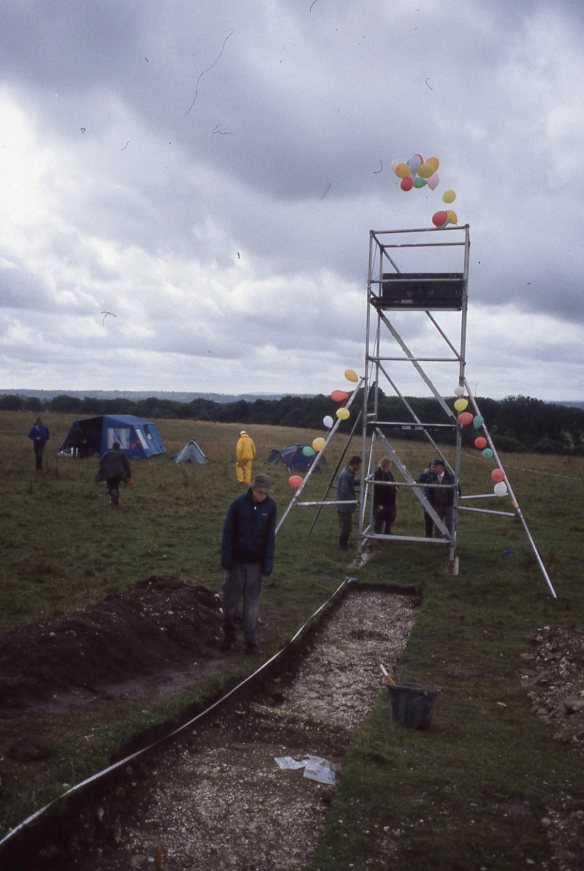 Base camp, Badbury, the scaffold tower decorated for Helen’s birthday.

Day by day the temple building emerged. We cooked tea beside the trench and at night identified finds, by gas lamp, sitting on folding chairs around the folding table. One evening we walked around the Rings and the white ghost of a barn owl flitted across our path.

Most of it was gone, taken for building stone about 1500 years ago. It had been a sacred place for at least 500 years before that. In the Iron Age, when Badbury was still occupied, people had worshiped their gods here. They left offerings. After the Roman Conquest, when they had moved down to the Stour at Shapwick, their children and children’s children often returned to this sacred place, leaving more votive gifts, right up to the 5th century. 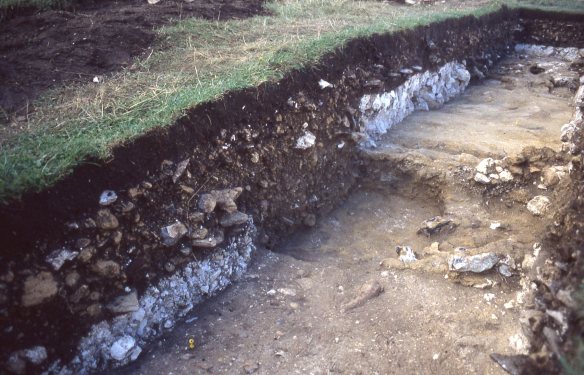 The stone from the temple wall had been robbed out leaving only a skim of mortar at the bottom of the foundation trench. The building material salvagers have left the chalk floor of the 4th century temple and the flint and tile cobbled floor below it which had 2nd century coins embedded in it.

Who knows why this place was special. The barrows show that it was already significant in the Early Bronze Age, over 4000 years ago.

We found fragments of horse so perhaps a god linked to hunting or riding was honoured.. but this is a bit far fetched because we also found many tiny coloured beads and fragments of small pottery vessels (for incense?) neither very horse related.

The temple had once been nicely decorated, there were fragments of painted plaster.

There would have been a central square tower building with a covered walkway around it. The temple was originally roofed with clay tiles, later with Purbeck slates. This ‘cella’ building was surrounded by a gravel courtyard which ran up to the the octagonal temple precinct wall.. And we found the flint footings of the little building at the edge. Perhaps a Priest’s House or a store room. 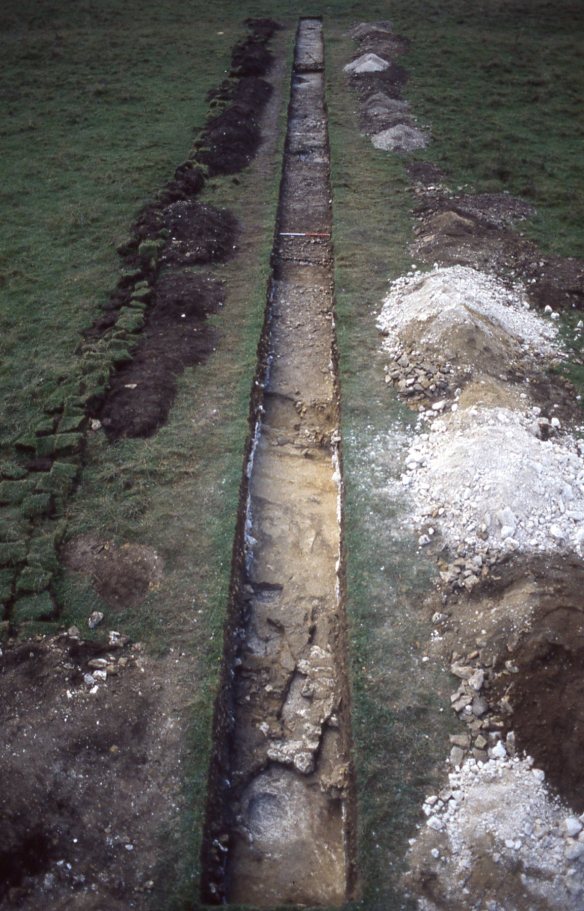 The view of our trench after excavation from the scaffold tower. The temple building directly below looking toward the temple precinct wall in the distance.

The dig revealed pottery hidden beneath the soil. It would be bad conservation practice to dig everything up, it’s best to save things for the future, and also we did not have the time or the resources.. so we put a protective cover of chain link fencing over it. The grass has grown through it and buried it now.

4 thoughts on “An interesting site”