In the Trust we have lots of ‘stuff’  and every cupboard and box can contain surprises, this is one interesting tale from Chedworth when we cleared the cupboards in the Museum ready for a revamp and new display cases. 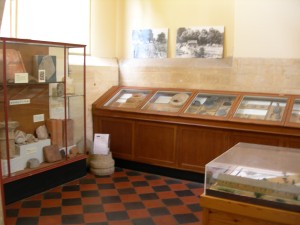 The old museum cupboards at Chedworth

Amongst the boxes of tile, pottery and metalwork was a brown paper bag, with ‘two tesserae’ written on the outside. Inside were indeed two cubes of stone, the tesserae, along with the following  letter.

The letter and the returned tesserae

We have not been able to replace them as we don’t know the exact place he took them from, but at least they have returned home 🙂 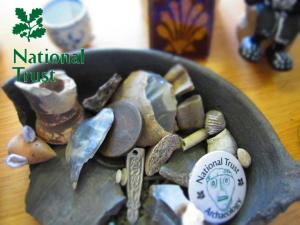 The roman pot with all sorts picked up on my travels through archaeology!

We all pick up interesting objects or souvenirs of our travels. I have flints and bits of pottery in my pockets and a roman pot on my desk full of ‘bits and bobs’.  Somehow  having something  whether it be an interesting stone, feather, pine cone, sherd of pottery or shell from the beach, seems to  connect us with places and memories.

I am sure we all have shells, sea worn glass and pebbles from trips to the seaside, or a stick or seed pod from our countryside rambles. Maybe some of the odd things we dig up on site could be explained by this subconscious need to collect objects that map our wanderings in life.

The three ammonites, small, medium and large,  we found on Maiden Castle were maybe collected as curious souvenirs, when the Ironage people were collecting  pebbles on Chesil Beach to use as sling shot. Or the french coin in the 17th century context at Corfe Castle that may have come back with a traveler plotting and scheming to help the King as Civil War touched all in the country….. once agin the archaeologist weaves a story……..:-)