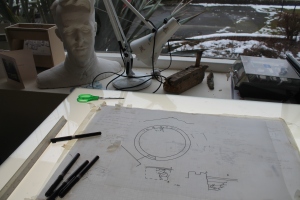 Bit chilly outside. Not so good for fieldwork. January is a good time to catch up, so I am writing up stuff from last year.

In September, the tenant of Home Farm on the Tyntesfield Estate, North Somerset, dug up a shrub from inside a circular structure next to her house. She found some white glazed tiles and Kath the Building Surveyor asked me to investigate.

I straightend up the sides of the hole and dug down through building rubble onto a flagstone floor. The white tiles were above a stone plinth. From the way it was built, it had once been a classy structure. I described the layers, took some photos and drew the trench in plan and section. My finds.. were some 20th century pottery, a cat skeleton and two decomposing batteries.

The building was beside a rockery and it seemed to be part of a designed garden on the edge of the Park. Stephen, the curator (who loves the Victorians)  said that there had been an ornate Creamery building here, which the ladies of the big house would visit. Quite a fashionable thing to do at the time, apparently (there is another example on Brownsea Island with stained glass windows and a cow sculpture…. good archaeological evidence for bovine worship?).

The thatched Tyntesfield Creamery was knocked down about 60 years ago leaving only the foundation. Bit modern but interesting…..M